Baz and Co. - The Battling Brummies

Many of you are aware of the artwork of Mike Higgs from his popular strip The Cloak that ran in Pow! (and the merged Smash! and Pow!) in 1967 to 1969. You may also know him from his Space School strip in the early issues of Whizzer and Chips and his ThunderCap strip in Buster in the 1990s. Mike's done a lot of work over his career - some of it outside of children's comics such as compiling/designing many books about comics for Hawk Books or writing/drawing various childrens books. He's also produced a couple of newspaper strips - namely the long running Moonbird strip in the 1980s and for the Daily Mirror he created Baz and Co.

Baz and Co started life around 1990 when Mike submitted an idea for a new strip about a dog to the Daily Mirror. The paper's cartoon editor felt that they already had a cartoon dog in the form of Boot (in The Perishers strip) but liked Mike's style and suggested he might like to develop a different idea. The concept was that it'd be about a group of friends in their late teens/early twenties who were forming a band. Mike set to work and Baz and Co was born. The Mirror added the sub-title The Battling Brummies - basically because Mike was from Birmingham!

Mike was very pleased to have a strip in the Daily Mirror as their strips page had been a favourite of his as a child. (The Mirror was renowned for its great strips with characters such as Andy Capp and Jane becoming household names.) Baz and Co suited the paper well. On weekdays it would appear on the Mirror's pop page and on Saturdays it'd be one of the tiers along with Garth and the rest.

Mike even managed to promote the idea of adults reading comics being acceptable by depicting Baz as a comics fan who frequented a comic shop. The shop's owner bore a striking resemblance to Mike's old friend Phil Clarke who was until several years ago the owner of Birmingham's Nostalgia and Comics store (still one of the UK's longest running - and best - comic shops). 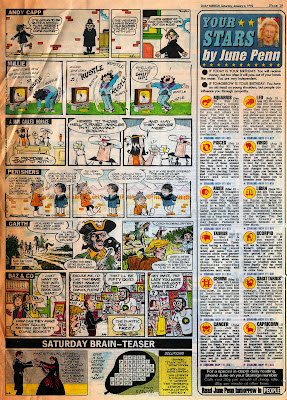 Baz and Co ran for over two years in the Daily Mirror before editorial shake ups led to a reduction in cartoon content. It was a good fun strip as can be seen from the few examples here and a worthy part of the Mirror's rich cartoon strip history.
Posted by Lew Stringer at 13:20

Fun to see other comic artists other work..

Have you got examples of Robert Nixon and Trevor Metcalfes strip they did for the paper like to see those one days reviewed and shown by you..

I love Mikes work. I came to it through his Moonbird childrens books when I was young. I now read those to my children. The cover to Moonbird and the Space invaders is still once of the strongest visual elements of my youth. What is Mike doing now days? Are there any collections of his comics? WOuld love to se emore of his art.

Sadly there aren't any collections of Mike's strips although a Cloak collection is likely in the future.

Mike's been doing a lot of commercial art jobs over the years and still does when he can. He also compiles/designs books for Ugly Duckling books such as that 'Great British Fantasy Heroes' anthology.

I'd really like to see some more full cartoon pages from the Mirror, Sketch, Sun & Star through the years if at all possible?

I have some old Daily Mirrors I could show, but not the other papers. I've shown some old Mirror strips here in the past. If you put Mirror or Garth in the search window of this blog you should find those posts.

Do you know if Mike Higgs will rerelease his moonbird books with a cd and updated art work ?

Hi Brendan, I was having a couple of beers with Mike earlier so I passed on your question. The answer is "No plans at the present time".