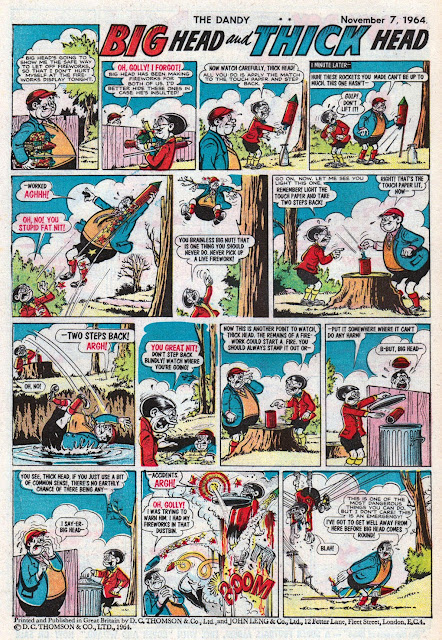 The days of characters in British comics having fun with fireworks may seem irresponsible in retrospect but back then it was just plain fun. Here's a few strips from the 1960s, starting above with a Big Head and Thick Head back page story from The Dandy No.1198 (dated 7th November 1964, on sale 2nd November of that year). At first glance you may think this is by the strip's original artist, Ken Reid, but Ken had left by then and was busy at Odhams on Frankie Stein for Wham! This is actually by his successor, Frank McDiarmid, who did an excellent 'ghosting' of Ken's style. (Frank later went on to illustrate many strips, including Cheeky for IPC.)

I was 5 when I first read that strip and it amused me no end when Big Head would call Thick Head a 'nit'. It's an insult that seems to have gone out of fashion over the years, but was used a lot in TV comedy programmes and movies at the time too. 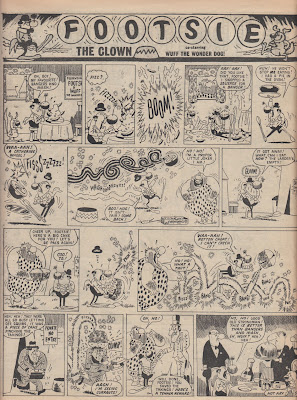 Next, a strip that is by Ken Reid; The Nervs from Smash! No.145 (dated 9th November 1968, on sale 2nd Nov that year). A mind boggling amount of detail in this double pager... 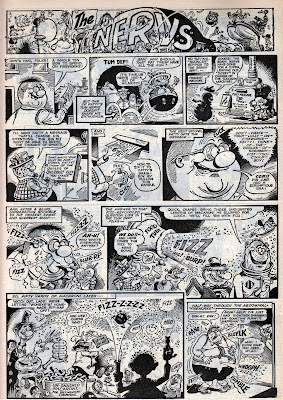 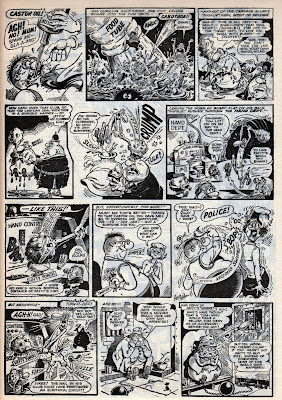 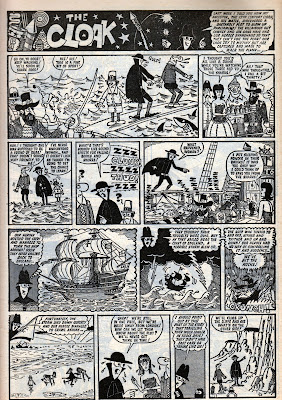 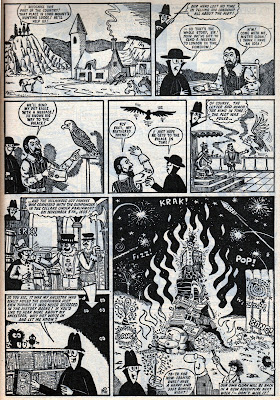 As always, click on the images to see them larger. Search my blog with the search window on the right to find more fireworks strips from UK comics.

If you've having fireworks this week, take care and have a safe November 5th.
Posted by Lew Stringer at 20:16

Light the touch paper and take 2 steps back? It's about 10 metres now!! Great strip that. MJ

Very true, MJ. Also, a lot of old strips show people holding fireworks. That may seem very irresponsible but back then there were some fireworks with wooden (later plastic) handles that you could hold. Long since withdrawn I imagine, but they were great.

Firstly Lew, Welcome Back to this blog! I commented on the Crucible post, but I assumed it was your regular art blog, I never realised that this one was live again!
I like this blog, because most of the stuff from the past is new to me and you usually provide a selection of the artwork on each post and support it with relevant written comments.
It was interesting seeing the Ken Reid ghost on the same page as the genuine. The rendition of the character's faces are similar to KR, but the drawing of the bodies, especially the limbs are less precise, less solid and the background details lack the depth.
I surprised someone on another blog last week by stating that I was a fan of Leo Baxendale, but not a Ken Reid fan. But, I see the hard work that he puts into the composition of each page and the finer details he puts into each panel. I prefer his work when there are more panels, with Frankie Stein there was far less on each page. I believe it is the quantity that gives his art the quality (If that makes sense). While artists such as Baxendale and to an even greater degree Davey Law were freer spirits when it came to the drawing board.
I did not think I was gonna like the Footsie Clown story, but it was pretty good in both story and art! The ringmaster looked like Dick Dastardly from Wacky Races, but this predates that cartoon! I really don't know much about Graham Allen, but I like his style; very '60s!
As to the Cloak, I certainly see the influence of Mike Higgs on some of your character drawing.
There certainly was more latitude for writers and artists in using conflicts, danger and insulting behaviour before the PC and H&S sanitised everything. Sadly, only the Cloak story would probably be allowed today.
I hope this blog gets plenty of visitors (hopefully some kids) and feedback!
(Marko)

Thanks Marko. Yes, I've got two blogs on the go now.

What appeals to me about Ken Reid's work is the manic expressions, the exaggerated poses, and the way he draws basically, whether he puts 20 panels on a page or is just drawing one image (such as his World Wide Weirdies). On top of that, there's also the scripts, and I understand Ken either wrote a lot himself in the sixties or embellished them.

There's a few examples of Graham Allen's work on this blog. In his Odhams work he's ghosting Baxendale a bit, but his own style comes through too. He's still working, I believe, as a newspaper cartoonist and illustrator of children's books.

I was looking through some sixties comics toddy and it's amazing what they got away with. Most of the comedy violence would be considered too cruel today, and the racist slurs used against black people (even as recent as 1965, in strips such as Corporal Clott) certainly wouldn't be permissible now.

Great your blog is back and my favourite theme you've done so well before is also back...
do oooh!! aaaaww!! weeee! those firwork atrips are ace..

Frank has to be the best ghost artist for Ken...he did so many over the years...Roger the Dodger...faceache...etc..

Just read the Cloak and it was clever how he didn't look that much different except the hat!! Also liked him talking into the past..

Yep, The Cloak was a great strip. Very inventive. Too bad IPC axed it just because it didn't suit their idea of the new Smash!