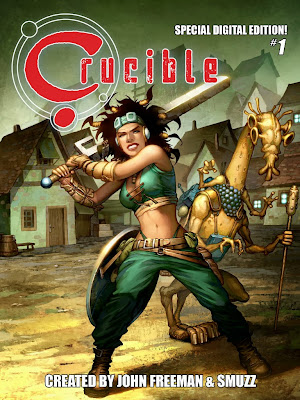 Digital comics are sometimes criticized for being as expensive as the paper versions, despite not having print and distribution costs. Well, that accusation certainly can't be leveled at Crucible No.1, which has 24 full colour pages for just 69p from Apple's Newsstand. More info on the Crucible website: http://cruciblecomic.co.uk/


Crucible, the co-creation of John Freeman and Smuzz, is a science fiction adventure set in world where the many workless are assigned 'Tasks' to earn money In the first story the Temple of Orlyth hires a rag tag gang – a thief, a mage and two mis-matched warriors – to retrieve a sacred artefact in an abandoned mine. But others are also after their prize and they soon confirm what the adventurers suspected – most Tasks are deadly!

Described as " Science fiction – with dwarves!" by co-creator John Freeman and "Comparable to Tolkien at his most ironic. Matches Dune for obsessive world-building " by artist Smuzz, Crucible is a project the pair have been working on as a concept for several years. 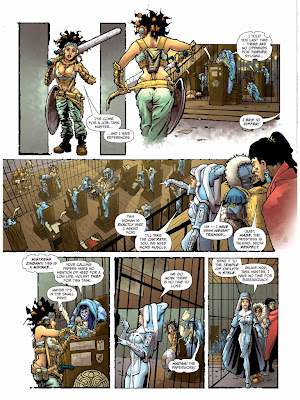 Currently published in print in STRIP: The Adventure Comics Magazine, on sale from UK newsagents, the co-creators decided to test the water for a full iPad edition of the comic using PressPad, which will also include background features and short text stories along with the strip.

John Freeman is a comics writer and editor who cut his teeth in the comics industry at Marvel UK editing titles such as Doctor Who Magazine, Death's Head II and Overkill. He has written strips for companies such as Marvel, Judge Dredd Megazine, STRIP (creating Black Ops Extreme with PJ Holden for that title). Currently Managing Editor for digital comics publisher ROK Comics, in what spare time he has he runs the British Comics news site www.downthetubes.net.


Perhaps best known by comic fans for his work for 2000AD on ABC Warriors, Marvel and Games Workshop, Smuzz is a critically-acclaimed illustrator whose award-winning art has featured in the SF magazine Interzone. In addition to co-creating and drawing Crucible, he recently launched his own children's book, If I Had a Dog, as a delightful digital edition. You can find him online at www.smuzz.org.uk

In If I had a Dog, a little boy imagines all the exciting things he could do if only he had a dog. In the end, it's not the dog, but his imagination that makes the magic...

"We're hoping the availability of Crucible on iPad will raise awareness of the title outside the UK," said John Freeman. 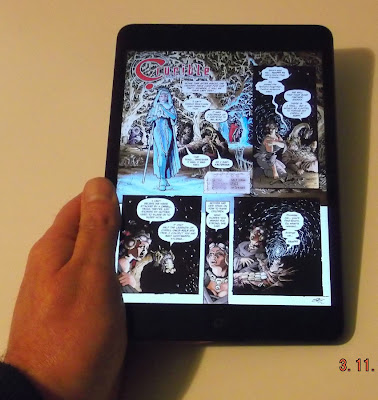 Crucible is one of a number of creator-owned strips that has been published in STRIP Magazine by Print Media Productions. Other strips include Age of Heroes by James Hudnall and John Ridgway and Warpaint by Phil Hester and John McCrea.

Issue Three of STRIP Magazine is expected to be on sale in November in all good newsagents in the UK.

With regard to the cost of digital comics , JUST IN CASE there is anyone out there who doesn't already know this, if you download the DC, Marvel and Comixology apps, you can download TONS of free comics without having to buy a single issue! - Yes folks, they GIVE th away!

They do have some free back issues to download but the majority of the comics are to buy. They cost about £1.99 upwards for the latest issues. I sometimes buy comics that way if I just want to read them without wishing to own the paper version. (I still find paper a much more convenient way of reading comics though.)

Comixology wouldn't last long if the freebies were the only thing the fans downloaded. Support the App.

Oh yeah, STRIP 3 for November? I'll believe THAT when I see it.

Dansak, I take your point and you're absolutely right. I don't download them myself, as I'm more interested in older comics, but I was just letting people know of all their free offers with no obligation. In hindsight, I shouldn't have pointed it out in case it encourages greed. Sorry, John.

No need to apologise, John. If your post leads people to try out the free comics and they see how good those comics look on an ipad then hopefully they'll buy a few of the latest ones too.

I'm guessing that these apps know what they're doing, as the more free comics they offer, the more cliff-hangers they leave us addicts dieing to know what happens next! Hence more sales for the apps! I'd also like to plug the fact that Comixology ALSO does an excellent 99 cent per issue Marvel Monday sale with as many as 50 titles of a chosen hero on offer. Again, they're hoping to get us hooked, but that's what the spinner racks of our day used to do to us anyway! I think we all KNOW just how addictive comics are! (Wish I had 'em all! - TWICE!! sigh...)

I must admit I've felt a certain disappointment at downloading a Marvel comic for £2.25 or whatever and finding it a five minute read. Although you can zoom in on the art to study it better of course.

For me, Crucible felt much better value at only 69p. Like comics of the past, it's the price of a bar of chocolate! :)

Yeah, I know the feeling, £2.25 of chocolate lasts longer than 5 minutes!
I can't say I have ever zoomed in on a comic panel though. The ipad has all this power and technology, but for me, I consume the digital comic in the same way I used to for the paper comic! I know the Dandy online version tried to deliver more than static drawings, but it was a bigger failure than the 2010 relaunch, but unfortunately they chose the wrong people to deliver the goods again! I am not going to commend them for having a go because you need to take risks. Maybe the comic-book should remain as its always been and not become an hybrid of sound, 3D or 2D animation. I remember you once posted a Tom Thug where you had used 3D (Bryce software) and I think you succeeded on that occasion. Technology is always moving forward, but the basics of the combination of good writing and good artwork in a sequence remains. The media by which it is delivered should be considered, but the first two are the primary ingredients.
(Marko)

Thanks got commenting, Marko. I think it was Combat Colin as a Bryce model you're thinking about. I did attempt a Tom Thug one but never finished it.

I can understand the Digital Dandy using animation and gimmicks as they were trying to win over a new generation of children. I can't say it did a lot for me, but then it wasn't intended to. Some adults enjoyed it though.

It had a different editorial team to the previous (paper) version by the way, and mostly different artists. I think the main reasons it didn't work was lack of publicity and teething troubles with the early issues; sluggish animation, pages not loading, etc. That's why I gave up on it anyway. It was certainly cheap enough though so hopefully they'll try again one day.

Lew, I've got to report that I've COMPLETELY changed my tune about digital comics, having now tried some! I will always love the paper originals the best, but once I saw the reproduction of the digital DC & Marvel silver age comics, I couldn't resist them! And I find myself spending ages on every panel, drinking in every detail like never before! The average price per issue is £1.31, which I'm prepared to pay. Plus, nearly every day there is a special offer on something or other for only 69p each! All of this makes me want to give Comixology another well-deserved plug. Also, on the Dark Horse site, I'd like to recommend "The Fifth Beatle - the Brian Epstein Story" digital graphic novel - a must for people of our age!

P.S.I forgot to ask, do you know of any apps I could get UK comics from?

If you mean old comics, John, I can only think of Egmont's Classic Comics app, but I think they only have a few strips at present. (Charley's War, and Roy of the Rovers.)

Several current comics have an app though, such as 2000ad, The Beano, etc.

There's also ACES WEEKLY of course; exclusive brand new digital strips every week. A subscription works out at a pound an issue.