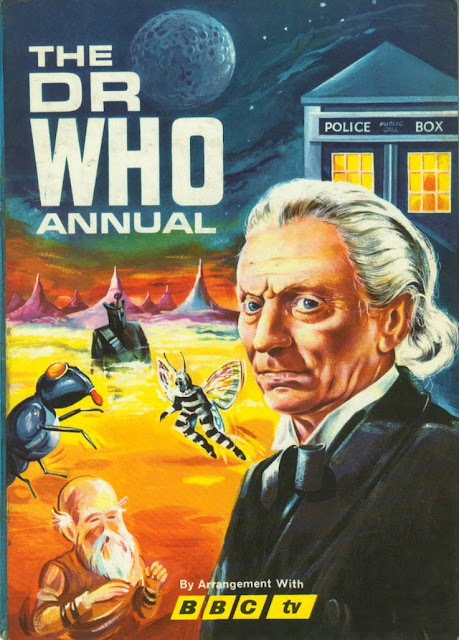 I'm sure a billion other blogs will be posting about Doctor Who today on this 50th anniversary of the show so I thought I'd join in the celebrations. Here's a brief look at just a few of the comic covers that The Doctor appeared on during the first ten years, starting with Walt Howarth's painting of William Hartnell as the first Doctor for the first Doctor Who Annual above.

Next up, here's one of John Canning's TV Comic covers featuring the second Doctor, Patrick Troughton (issue 796, March 18th 1967). You may notice that Canning managed to get his name on the cover by blatantly making it part of the shop front. 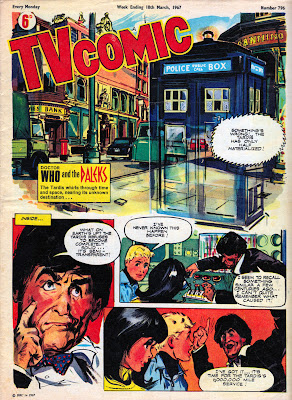 By 1971 the Doctor Who comic strip had moved to TV Comic's new sister publication Countdown. Here's a Harry Lindfield cover to issue 27 featuring Jon Pertwee as the third Doctor. 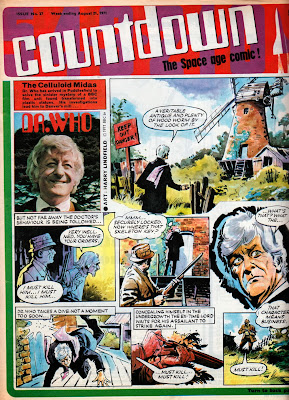 Countdown's falling sales led to a big revamp in 1972 and a title change to TV Action, but the Dr.Who strip continued, now with a regular cover spot. The artist by now was Gerry Haylock who captured Jon Pertwee's likeness perfectly. 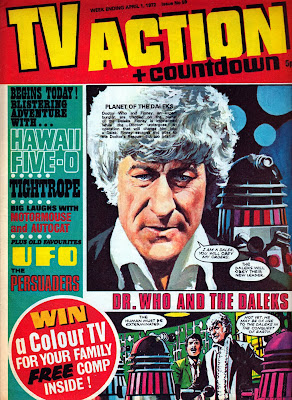 Using the Daleks as the foes in the strip during the revamp was a good idea to retain the readers interest. Here's another Gerry Haylock cover from a few weeks later. 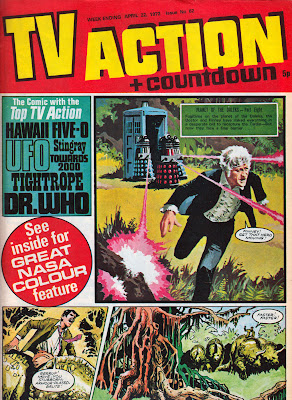 TV Action had run a competition in its first issue for readers to create a new monster for the Doctor to battle. The winning entry, The Ugrakks, was announced in issue 72, chosen by a team of judges including the comic's editor Dennis Hooper, Doctor Who producer Barry Letts and Jon Pertwee himself. The monster then appeared in issue 79 (August 19th 1972) with the lucky winner himself also appearing on the cover... 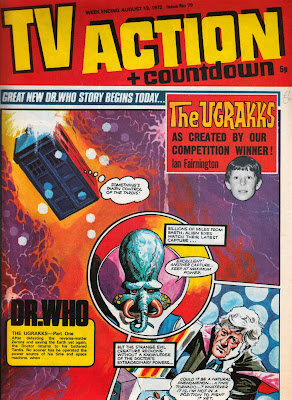 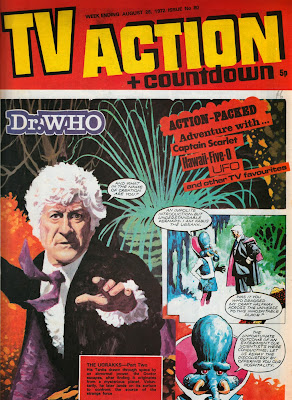 Another revamp for the comic with issue 101 led to cover strips being dropped in favour of full page illustrations representing that week's 'Big Story' (the strips took turns to feature in one seven page complete story inside). Doctor Who had a few turns, including these two striking images. 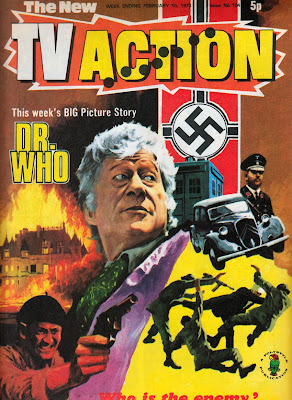 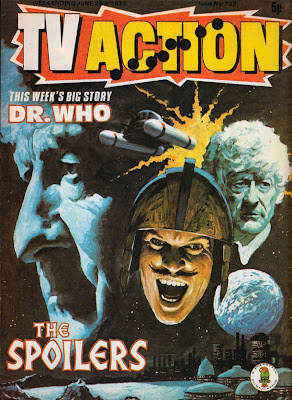 TV Action's fortunes sadly continued to fall and it was merged into TV Comic, taking Doctor Who with it. In 1979, Marvel UK acquired the strip rights and have been publishing Doctor Who Weekly (or Doctor Who Magazine as it soon became) ever since. Happy 50th, Doctor Who!
Posted by Lew Stringer at 01:19

Might I direct those who don't already know to the excellent Altered Vistas website, featuring details of every DW comic strip printed and to the equally excellent Tony's Trading website which features every single DW comic/annual cover! There is also an excellent book - The DW comic strip Index, which details all of the pre-Marvel comic appearances. - all in all heaven for any Whovian!!

I never knew Doctor Who had a regular strip until the weekly came along. I just thought there were occasional appearances in books and specials and the like. So thanks for this Lew, fascinating to find this out!

Yep, the strip started in TV Comic in 1964 and carried on every week until it transferred to Countdown in 1971. Countdown became TV Action in 1972, merged with TV Comic in '73, and the strip carried on until 1979. There was a few months break I think before Marvel UK started Doctor Who Weekly in late 1979 and the strip has been running to this day. I think it's the longest running adventure strip in British comics if we take 1964 as the starting point.

There was also a Daleks strip on the back cover of TV21 from 1965 to 67, continuing the approach to the characters that had begun in the first Dalek Annual in 1964.

If you put a search for Daleks or Doctor Who in the search window to the right of this post you'll find other posts about it.

John, thanks for the info. I didn't buy that book as it was very text heavy and I personally get turned off by synopsis of comics but glad go hear it worked for you.

The first Dr.Who annual cover was done by me ,not Walter Howarth.How do I contact Gary Wooton who you say was his agent?
Thanks -Stan Freeman

I've given Gary your contact details so hopefully he'll be in touch with you. This is most unexpected as various sources have credited Walter as the artist for years. So you did the actual finished painting from scratch?

I think we've covered that ground Lew but I will say again-I took a vague telephone brief from the World Distributors rep in London when I was with John Pemberton the MD.I then searched the back street second hand booksellers looking for mags with pictures of police boxes till a photo of Wm.Hartnell arrived for me to copy in colour.Idid the whole job -concept ,design and finished artwork including lettering of the front and back covers -I was then off sick for a year.Walt did only the inside line pics.

at that time I was mostly busy with pop culture designs like MEET The Beatles.Elvis .Pop Annual,Football Annuals painting books ,puzzle books ,story books etc.Annuals had been mostly handed to the outside agency Walt was with but not the first Doctor Who.That was mine-Stan Freeman