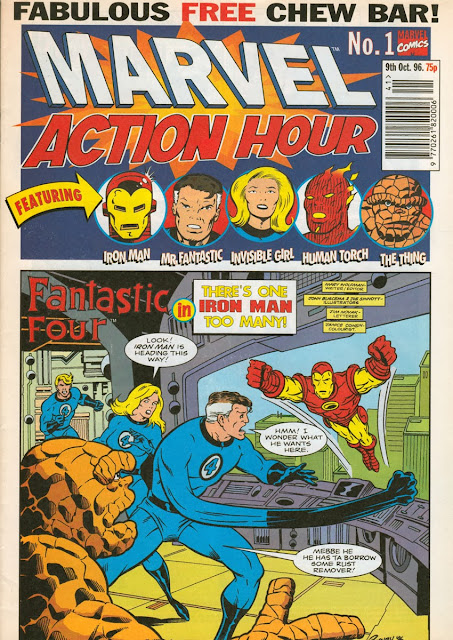 Marvel Action Hour was another attempt by Marvel UK to utilize American reprints in a British comic format. The slim 24 page fortnightly was printed on matt paper and featured Fantastic Four stories from the late 1970s and Iron Man strips from the 1980s. The first issue was cover dated 9th October 1996, and priced 75p. The free gift was a chew bar. 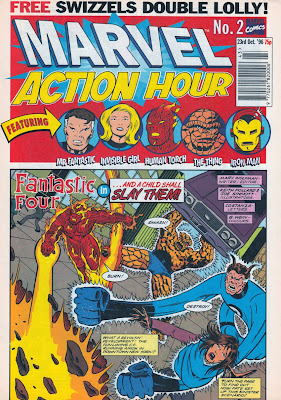 With so few pages to accommodate two US comics, the strips took it in turns to be serialized over two issues. For example, issue 1 featured a complete FF tale plus the first third of an Iron Man story, and No.2 featured the rest of the Iron Man story and 9 pages of the next FF adventure. 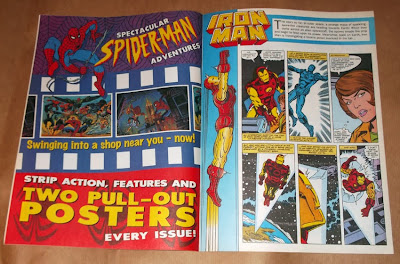 The reproduction of the strips was excellent and the comics featured some fine John Buscema/Joe Sinnot Fantastic Four pages. 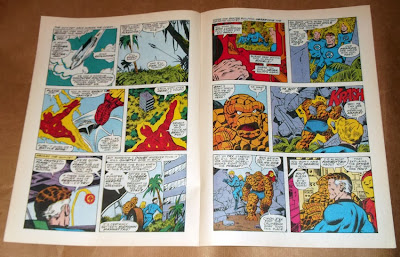 The original splash pages of the lead strips were replaced by newly drawn images by Jon Rushby and inked by Bambos Georgiou so the stories could begin  on the covers in traditional UK fashion. 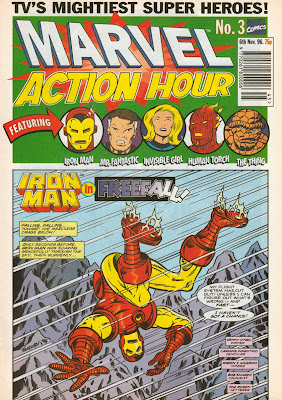 The title was inspired by a cartoon series of the same name so clearly the comic was hoping to capitalize on that. Sadly, it wasn't to be. After just four issues the fortnightly was abruptly cancelled with no warning. So sudden was the decision that the next issue was advertised but never materialized. Sales must have been pretty low. Superheroes were a hit or miss affair with the British public back then. The Fantastic Four had never really been hugely popular in UK comics so it was never going to be an easy sell. 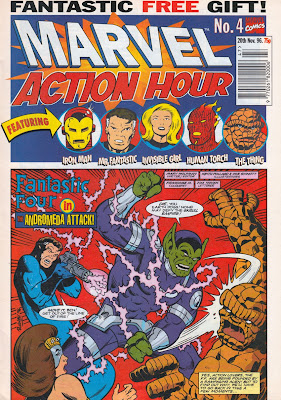 Marvel Action Hour was one of the shortest-lived UK comics of all time but it was a worthwhile effort. The company have since enjoyed much more success with the 76 page 'Collectors Editions' reprinting three full comics, - aided no doubt by the massively successful Marvel movies of this century.
Posted by Lew Stringer at 08:00

That one really did come and go in the blink of an eye. I don't remember it at all! And how wonderfully retro. On first glance I would have said late 60s or early 70s.
A belated Welcome back Lew. All the best.

Designed by the legendary Gary Gilbert. Edited by Jason Quinn.

The TV show aired on BBC ONE early on Saturday mornings which must have hampered the comics' chances.

Because the Action "hour" was actually much less than an hour once the commercials were clipped out, reruns of one of the Hulk cartoons was added to the BBC version.

I think the M-UK edition might have fallen victim to the change of management from Marvel to Panini which happened around this time.

I posted some Action Hour bits way-back-when on my starlogged.blogspot.co.uk. I often post MARVEL UK stuff there.

And I missed it too, any more forgotten Marvel UK weeklies in your vaults?

I'm sure I can find one or two John.

Anon, thanks for the info! I vaguely remember the US versions of MAH comics. Perhaps Marvel UK felt the classic material would go down better. Or perhaps they thought they'd catch up with the US version too quickly?

It was just after the Panini takeover and one of the new ideas the new owners tried out. The following year saw them release a mag called Football Crazy that lasted even less issues (I think).

Thanks Alan. Always good to have an insider's view. (I'd long since stopped freelancing for them by that stage.)

I don't recall Football Crazy at all, but then I never look at the footie mags section. Did it feature any strips?

If I had one is there any value

I don't really follow the value of comics but I wouldn't think it'd be worth much.