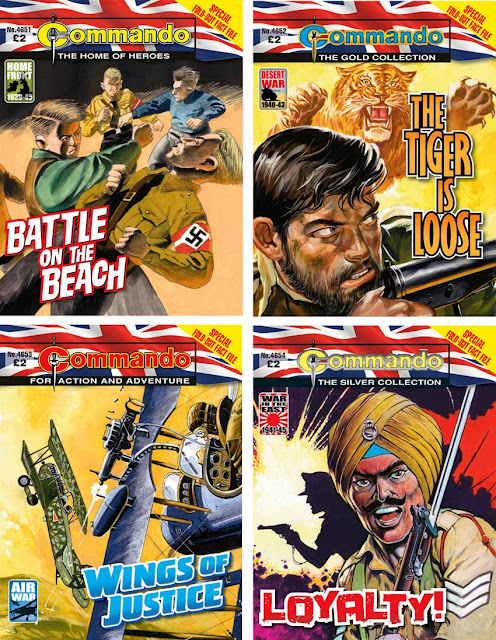 The latest batch of Commando comics are out this week, with a new trade dress behind the logo in the form of a Union flag. Here's the press release from DC Thomson...

In 1941, Jim, Alec and Rick are three young members of the Home Guard on the south coast of England who dream of doing their bit to help in the war. Constantly overlooked by their CO because of their youth, though, they seem destined to sit out the action.
However, a wild storm is destined to send the three friends into action alongside a crack Commando unit…and into a deadly personal battle with three fanatical members of the Hitler Youth.

They called him “The Tiger”…
He was a tattered, gaunt giant of a soldier, the lone survivor of a blazing wreck in the desert — and the shock had robbed him of his memory. He knew two things only, his name — O’Leary — and that he had a grim hatred of Germans. But if O’Leary was a man of mystery, he was also a man of many talents. He could shoot like a sniper, command an armoured car, lay field guns, and he could fight — like a tiger!
When advancing German troops over-ran the desert like jackals, preying on helpless cut-off British patrols, herding the brave, beaten men into prison cages, someone should have warned the Germans…someone should have told them…that “The Tiger” was loose!

There’s a little bit of licence in the title and on the cover of this Commando. Despite what’s indicated, there aren’t actually and real furry tigers in the story. The tiger in the title is the fighting fury holding the gun. Fury is a good word to use for the whole story charges along at a furious rate — something which suits inside artist Sio’s style beautifully — leaving you breathless by the ending.
Ken Barr’s cover, by contrast, seems a little understated…until you realise that both figures are ready to strike, and strike hard.
You might need a lie down after this one.

In 1928, former Royal Flying Corps pilot Teddy Morgan was making a comfortable living as part of a daredevil wing-walking act in a flying circus.
Then a former comrade-in-arms turned up with a job offer that Teddy simply couldn’t refuse — the chance to take to the skies in combat once more.
Teddy’s new employer was a ruthless Central American dictator. Not only that, he had to work alongside his old enemies, the Germans.
Before long, Teddy was wondering if he was fighting on the right side…

When he first met Sergeant Khan, Captain Peter Wade wondered whether he could trust the Indian. But he had no time to worry about it, for the Japs were on the offensive and pretty soon all his attention would be focussed on them. Then came the day when he was hit by a bullet — fired by one of his own men!

With its clashing characters and unrelenting action, this is an explosive Commando story — but my main reason for saying this is that there an awful lot of explosions contained within its pages!
In the future — with The Ed travelling to Commando HQ each day via jetpack or flying car — if we managed to produce interactive Commandos with 3D CGI characters and sound effects (or something), then this booming tale would be in danger of causing shell shock amongst its readers. Back here in the present we hope you enjoy it just as much (ear plugs not required).