Surprisingly, although this blog is now in its 10th year I seem to have neglected one of the most popular comics of the late 20th Century. Let's put that right with a look at the first issue of Battle Picture Weekly.

By the mid-1970s, IPC hadn't been having much success with their adventure comic launches. Both Thunder and Jet had bombed after 22 weeks each, the revamped Smash! was gone, as was the long-running Lion, and even their most successful new comic, Scorcher, had folded after nearly five years of publication. DC Thomson still had a fair number of comics, and the expansion of Marvel UK's line of reprints was also a threat. Then, in 1974, Thomson's launched Warlord, a new, dynamic-looking comic filled with war stories. It became an immediate hit. Knowing the company's old formula was no longer working, IPC hired freelance writers John Wagner and Pat Mills to produce a rival comic to Warlord, - and they succeeded admirably.

Battle Picture Weekly No.1 was published on Thursday 6th March (or possibly the day before, as "Every Thursday" comics usually appeared on Wednesdays). The title was derived from IPC's long-running Battle Picture Library pocket-comics. (Most kids, and contributors, would just refer to the weekly as Battle, so that's the name I'll use here.) One of Warlord's visual strengths was its limited use of colour for the covers with fiery reds and yellows (although that may also have been a budgetary consideration). Battle competed by upping its game to utilise the more expensive Web Offset printing methods. This enabled fully painted cover art and better paper than standard newsprint. (Although it downgraded to cheap newsprint after the first 12 months.)

Inside, page two kicked off the comic with a short and snappy message to welcome the readers. No pseudonymous 'Pete/Mike the Office Boy' types with fictional anecdotes as had been the norm on Scorcher and Smash! This was clearly a new no-nonsense kind of IPC comic for a modern generation. The stories would also have a more direct approach to dialogue and action, making them exciting and fast paced. 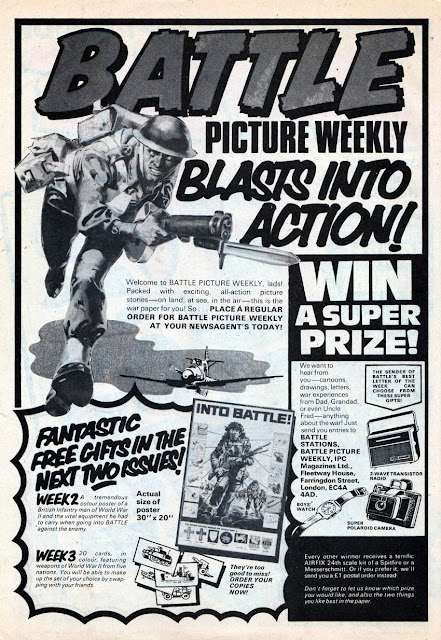 Page three brought us Battle's first character; D-Day Dawson written by Gerry Finley-Day and drawn by Colin Page I believe. (Sadly, the comic was uncredited at this point.) Dawson was "a man with nothing to lose" due to a bullet lodged near his heart and would prove to be a popular strip for quite a while. 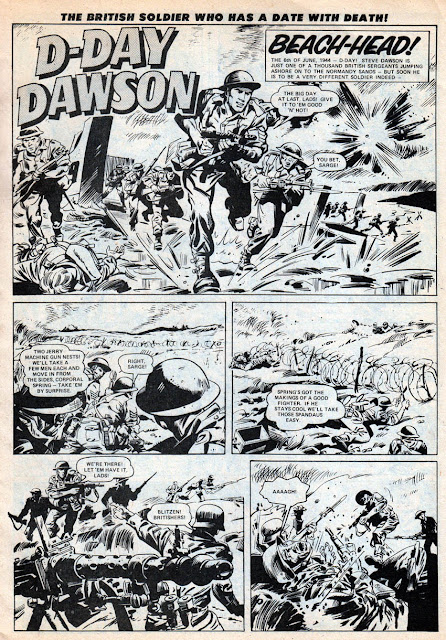 Lofty's One-Man Luftwaffe saw a pilot officer escape a prison camp and adopt a dead German's identity to join the Luftwaffe so he can secretly shoot down German planes. 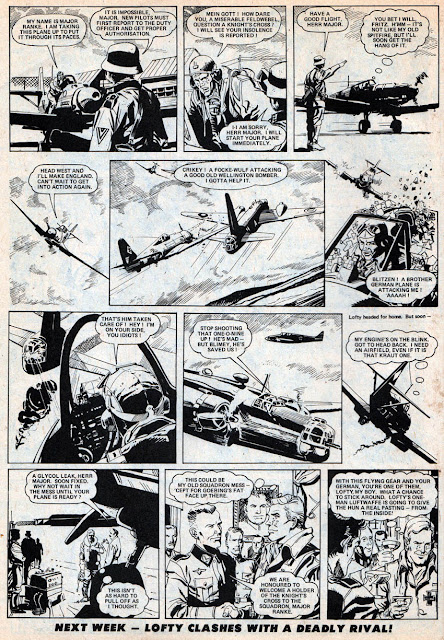 The Flight of the Golden Hinde was perhaps the most old school (and daftest) of the contents, with a replica sailing ship embarking on its war against German shipping. Superb artwork though, which looks like that of Vanyo to me but I'm unsure. 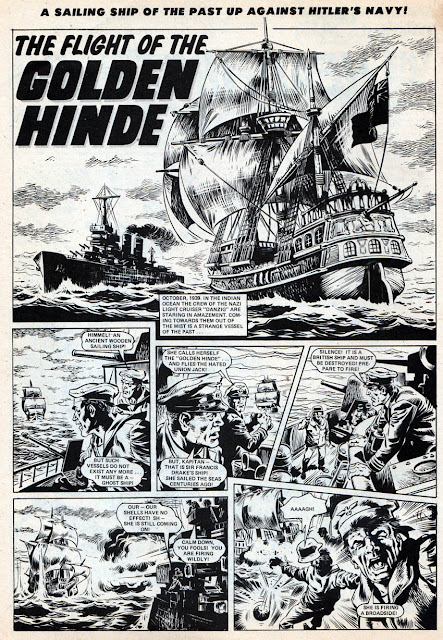 The full colour centre pages featured Day of the Eagle, introducing us to British secret agent Mike Nelson, code-named the Eagle. Written by Eric Hebden and drawn by Pat Wright. By the end of chapter one, Nelson had been assigned his mission; kill Adolph Hitler! 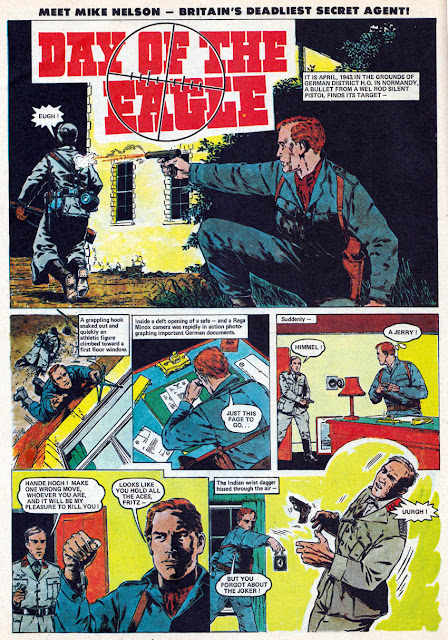 The Bootneck Boy by Gerry Finley-Day and drawn by Giralt was about the trials and tribulations of young recruit Danny Budd... 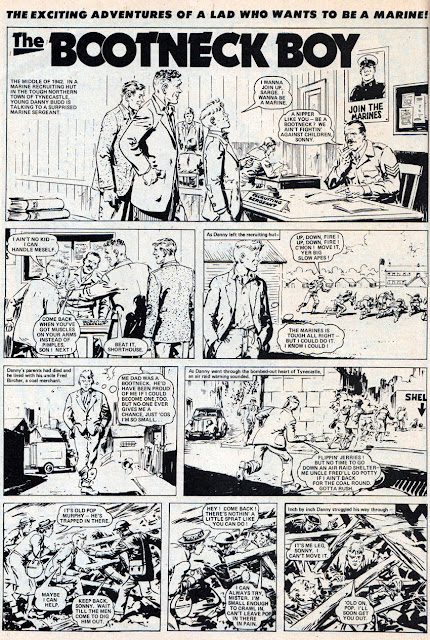 Rat Pack was Battle's main feature with six pages devoted to the strip. (A luxury back then, when most strips ran to half that amount.) A straightforward premise inspired by The Dirty Dozen; criminals with specialist abilities commissioned to work as a crack commando unit. Story by Gerry Finley-DAy, art by Carlos Ezquerra. 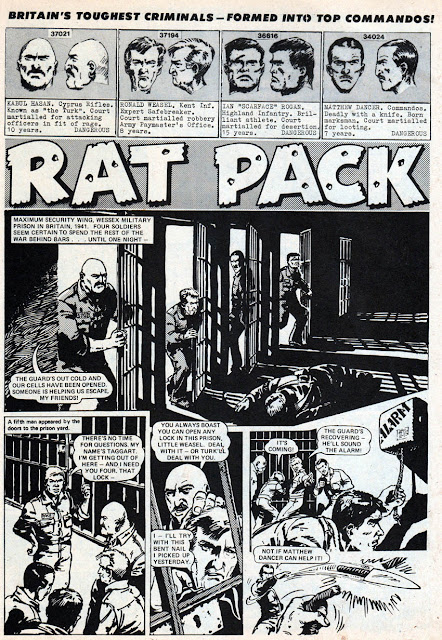 The Terror Behind the Bamboo Curtain closed out the comic; a tense story of prisoners of war in Burma. 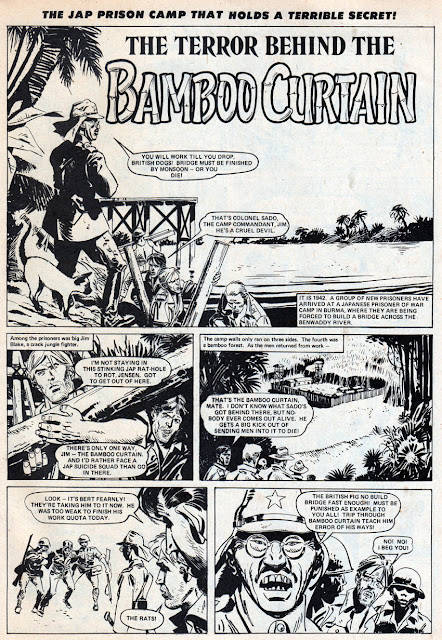 On the back page, a regular feature called This Amazing War! Perhaps too jolly a title for the image of death shown beneath it. 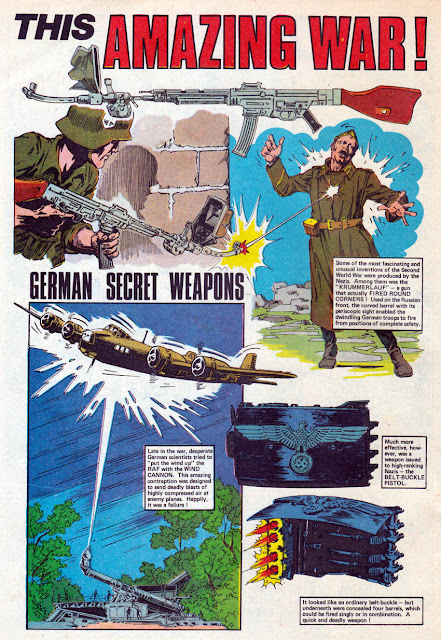 Although Battle was unashamedly influenced by Warlord it definitely had its own approach to the stories. Warlord's main character was a pillar of the establishment, Lord Peter Flint, whereas Battle's main strip featured four hardened criminals. Overall, Battle had a grittier, tougher (and more violent) edge than its rival, an aspect that Pat Mills and John Wagner would also bring to Action and 2000AD of course.

Battle was also far tougher than its companion comics Tiger and Valiant, although Valiant would later undergo a revamp by John Wagner to bring it up to date. (A move that was sadly too late to halt its cancellation but at least made it more suitable to merge into Battle in late 1976.) The only drawback perhaps was the use of typeset lettering instead of hand lettering, although I suspect that was a misguided attempt to make Battle feel less juvenile than its predecessors.

Battle enjoyed a good long run of well over 600 issues, lasting until January 1988. It lost some of its edge in later years, except for the standout strip Charley's War of course (which debuted in 1979) but 13 years is an impressive run for any comic.

The rights to Battle are now with Egmont and Titan Books have published several volumes reprinting strips from the comic, including Charley's War, Johnny Red, Rat Pack, Darkie's Mob, and more. There's also The Best of Battle which reprints a selection of strips. Well worth checking out.
Posted by Lew Stringer at 22:19

Just checked out Titan Books "The Best of Battle" and D-Day Dawson is indeed credited to Colin Page on art, though it says written by Gerry Finley-Day and Ron Carpenter and the notes say that they both "wrote the majority of the first series".

Similarly, The Bootneck Boy also lists another name, Ian McDonald (I imagine to spruce up GFD's scripts, a practice well documented by Pat Mills and perhaps David Bishop in his weighty tome, Thrill-Power Overload - unless of course the writing duties just happened to pass on after the first installment or so, but I fancy it is the former).

Here's to another 10 years of your blog Lew, always an informative read!

Yes, that's where I got my info from too. I took it to mean that Ron Carpenter and Ian McDonald wrote later scripts but I'm not sure. I'd have thought any sprucing up of Gerry's scripts would have been done by Pat and John. Some of the dialogue reads like their work anyway.

Thanks for the kind words about my blog but I can't see if running for another ten years. I may wind it down this year or next.

I have many happy memories of Battle. That comic was a huge part of my childhood and it's nice to see some of the trips getting reprinted.

I won't lie, I'm sort of curious to see some more of that Golden Hind strip.

Keep up the good work.

I remember my father telling me that when the Germans invaded Poland in 1939 they were met by Polish cavalry officers riding horses and wielding sabres - which sounds as daft as the Golden Hinde strip except it really happened. I had no interest in war comics and I was by this time a 100% Marvel fan since discovering Marvel in the previous November.

Great memories of this superb comic, a personal fav of both my brother and me (even at a time when we couldn't get enought of those Marvel weeklies!). I have most of the Titan hardbacks, including all 10 volumes of Charlie's War, and they are a real treat.
I recently bought Battle Classics which reprints HMS Nightshade in its entirity - a true Battle classic that one and well worth the price! Superb post Lew and one that brings back many happy memories!

There's also a book called "Garth Ennis presents Battle Classics", which unassuming title suggests (as it did to me, for months) that it contains reprints of some of his later war stories (US Published, I presume). Actually it's some more stories from Battle, and unlike the "best of" book, they're complete! The main one is HMS Nightshade, a "big ship" naval story, which was a bit of a rarity in itself.

Mike, Richard, you both posted at the same time about the same book! A second volume of Battle Classics is coming soon!