Preview: ROY OF THE ROVERS Best of the 1960s 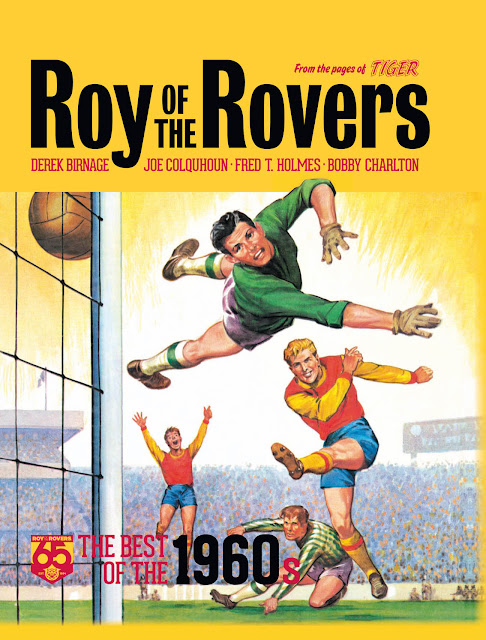 I'm currently reading The Best of the 1950s edition of Roy of the Rovers and it's truly superb with great reproduction, so I'll definitely be buying this 1960s follow-up.

Roy of the Rovers: The Best of the 1960s actually begins with a story that begins at the end of 1959 which leads into 1960. There are also selected stories from other issues of Tiger from the early sixties when the series was on peak form. Sadly the collection only reaches 1966, which was before the ones drawn by Yvonne Hutton in 1967, one of the few women artists who worked in boys adventure comics of the time. Hopefully there will be another collection that will include some of her work.

Nevertheless, this book does still contain superb work from cover to cover from the best in the business, beginning with the often undervalued artwork of Fred Holmes shown in the samples below. Joe Colquhoun returns to the strip later and we can see how his work became more dynamic and robust compared to his early style in the previous volume.

Oh, and Bobby Charlton listed in the credits? Apparently he wrote the series for a while. I always thought it was just a sales gimmick and a staff writer actually did the scriptwriting but the book maintains that Mr.Charlton did it so there you go.

To use a football phrase, I'm over the moon that Rebellion are reprinting these strips as I've never read them before. (My reading of Tiger began in 1969 when Jag merged into it.) I have no interest in football in real life but I enjoy these strips very much. Strange that,... or more likely it's simply that Roy of the Rovers is more exciting than reality!

Roy of the Rovers: Best of the 1960s goes on sale from 22nd August. Under review restrictions I can only show the first few pages of the book but these dramatic images by Fred Homes give you a great taste of comics of that era. Don't miss it!

The sixties are a defining decade for Great Britain. London is becoming the cultural mecca of the world, the Beatles are dominating the music charts, and in 1966 England will lift the World Cup for the first time. It’s also a period of great turmoil for Melchester Rovers and their super-striker captain, Roy Race; from a saboteur within the club burning down the dressing room, an obsessed fan trying to ruin their cup run and the Rovers crash-landing on a small South American Island, the team will have to face down problems which threaten their very existence! But with Roy Race at the helm, Melchester Rovers are always equipped to overcome the odds.The skipper’s leadership, experience and all-important left foot keep the Melchester faithful singing, and may just secure the Rovers a place in the 1966 F.A. Cup Final against the mighty Eastoke! The swinging-sixties come to life in this action-packed footballing epic! Experience the highs and lows on and off the pitch with Roy and Melchester Rovers, brought to you by comics’ legend Joe Colquhoun and World Cup winner Sir Bobby Charlton. 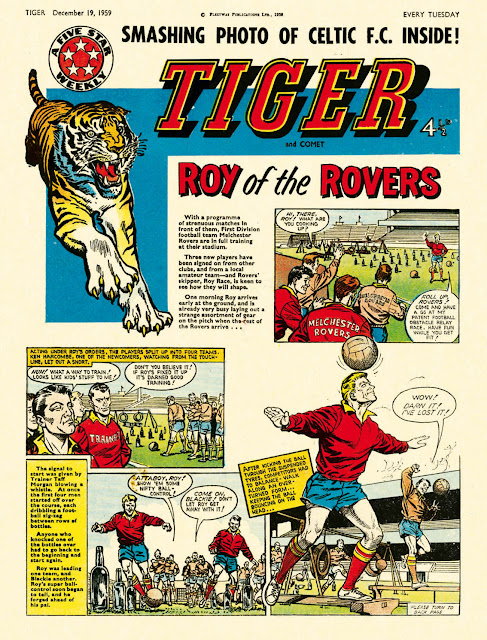 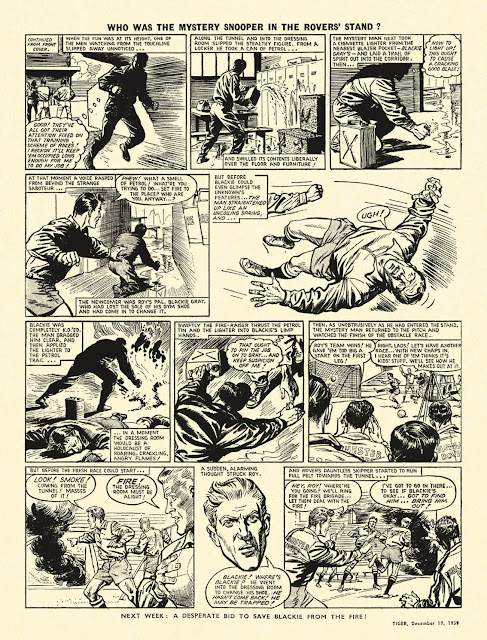 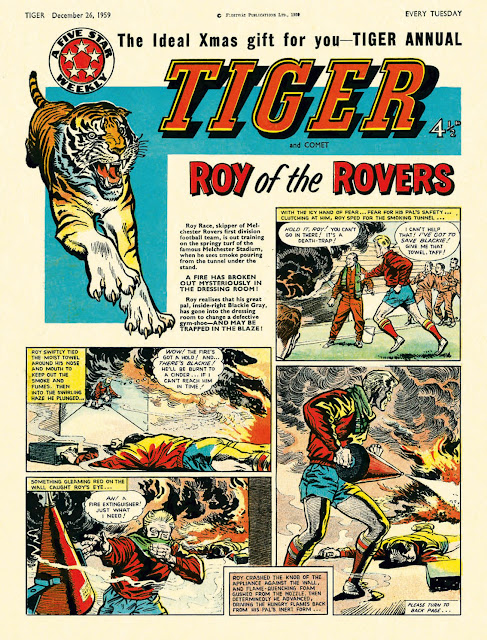 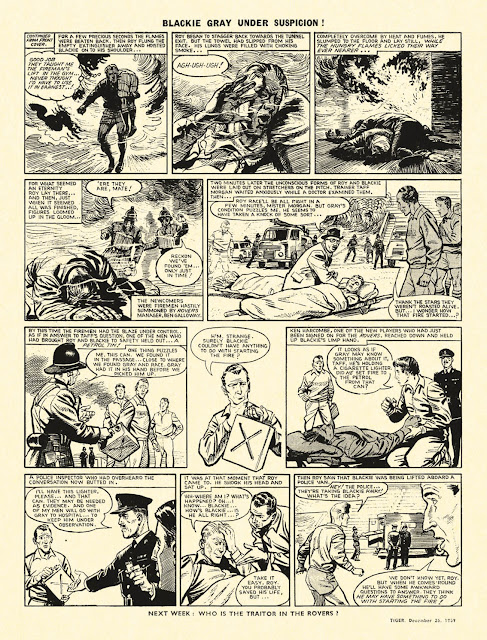 Email ThisBlogThis!Share to TwitterShare to FacebookShare to Pinterest
Labels: Fred Holmes, Roy of the Rovers, Treasury of British Comics

oh dear..
your intinctions were right, the new credits are wrong. To quote the unofficial Greek Roy of the rovers fan club (greek? interesting)

"In February 1960, the front page of the Tiger weekly comic blazed with the news that real life Manchester United and England soccer hero Bobby Charlton was writing Roy's adventures. Unknown to the readers it was in fact Derek Birnage, the comic's editor. Under Bobby Charlton's (Birnage's) direction, Roy led Melchester Rovers to FA Cup glory in 1961"

which yeah.. makes a lot more sense.. I have very little interest in Football, but Bobby Charlton is one known as a great player, and while he might be good at that.. I'm not totally convinced he would be able to write a comic strip straight out of the door like that.. the only possible way I would have thought is if he was working with a writer.. of course, there has been some non comic writers who showed they were in fact great writers but... I can't think of any of the top of my head.

Well,bear in mind that in later issues of Tiger people such as Gordon Banks wrote regular columns for the comic so it is possible that Bobby Charlton may have suggested some plots for RotR... but I can't imagine him having the time or the ability to write weekly scripts at the height of his footballing career. Yeah, just a promotional gimmick, which perhaps should have been clarified in the book.

yeah, writing columns and plot ideas I can completely understand and believe. It's just writing comic strips.. even with the artist and an editor doing a lot of 'converting' work (what's the comic version of 'screenplay'? don't think there is one.. apart from 'Plot by, script by' which isn't quite the same thing) but yeah, I think he might have giving some ideas but that's about it. I'm not sure if the 60s were at a period where (rightfully) they needed permission for his name to claim it, or if like in the 40s, they could sometimes get away with anything they wanted.. like comics staring actors who often never even knew there image and reputation were being used in such a way.. not that all 40s and stuff ones were like that bit... it was more common.