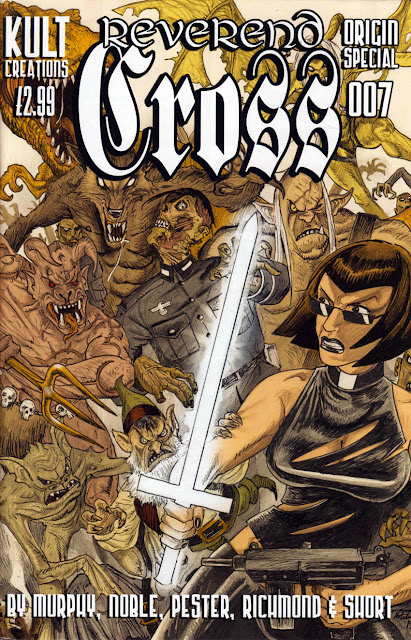 There's sometimes a concern with independent comics that they might not survive beyond the first couple of issues, either due to lack of sales or creative disinterest. Fortunately for us, that's clearly not the case with Reverend Cross, which has recently reached its 7th issue and is still going strong.

Dubbed "the first ever female vicar action hero", Reverend Cross is fast-paced escapist entertainment. As with the previous issue, No.7 contains four short, self-contained stories. All are written by John A. Short, with artwork by Aaron Murphy, Andrew Richmond, Gabrielle Noble, and Richard Pester. The excellent cover art is by David Hitchcock.

This is an "Origin Special", giving us some details on Abigail Cross' backstory as well as stories set in the present. Publisher/writer John A. Short has chosen a good selection of artists for this issue, giving us a variety of styles. It goes to prove that the character is strong enough to still be distinctive even when illustrated by various hands, thanks not just to the artists but also to John's confident and professional scripts.

With a cover price of just £2.99 (plus postage), Reverend Cross No.7 is well worth your time. You can order it, and back issues, directly from the publisher Kult Creations at their web shop here:
http://reverendcross.blogspot.com

There were commando chaplains, both in the magazine of that name probably, in The Eagle (1950s) probably (I don't know in either case), and in real life although that's less commandoing and more just the chaplaining.

And of course Battle Pope, but I'm not sure he has a parish technically. Also he's probably a superhero technically. Initially just the infallibility perhaps, but then super-strength...

Then there was "Angel Summoner" if he actually was a minister of religion. We mostly just saw the angel summoning, which isn't the same thing.

Kurt Busiek's "Astro City" early on included The Confessor, a super-powered Catholic priest, and a separate group of superheroes with bible powers and street ministry called The Crossbreed. But The Confessor's sidekick, Altar Boy, didn't have super-powers.

There was also Solomon Kane

Appologies to Lew, but he missed out a word from our tag-line. It should read "The first ever FEMALE vicar action hero."

Sorry about that, John. Will correct it right away!