The year 1969 has always felt special to me. Not only because it was the end of the first decade I'd grown up in (and it was a GREAT decade to grow up in), but also because the UK comics landscape was significantly different at the end of that year than when it began. As a ten year old back then, there were a number of changes to suddenly get used to in the weekly comics I enjoyed. I thought I'd show those changes here, which affected not only the few comics I was buying but also others too...

January of 1969 saw big changes for D.C. Thomson's Sparky. It had been gradually evolving from the somewhat old fashioned comic it had started out as into something more contemporary and offbeat. The biggest change came with its cover star Sparky, an outdated racist caricature, finally packing his bags and vacating the comic with issue No.211 (although head shots of him would still be seen on the letters pages for a while after)...
A big announcement on the back page heralded more changes with new stories arriving... 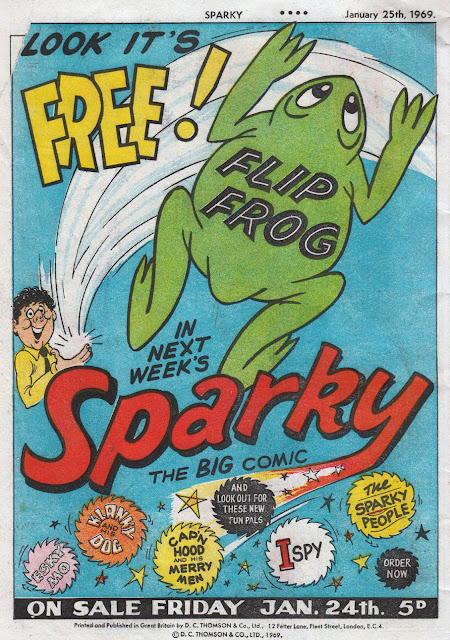 ...and the following week saw the comic given a snazzy new logo and cover star Barney Bulldog, with art by Bill Ritchie...
March saw huge changes for Smash! comic. Previously run by Odhams, it was now controlled by IPC who decided on a complete revamp. One week it looked like this...
...with its centre pages announcing the upcoming changes... 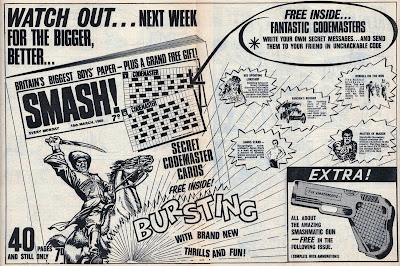 ...and the following week it was changed beyond recognition into a boys adventure comic (having previously been aimed at both boys and girls)...
IPC were determined to shake up the comics line they'd taken over from Odhams and Fleetway. A few weeks later, it was the turn of Jag to face even more drastic changes. Only launched 43 weeks earlier by Fleetway, this March issue was to be its swan song...
A merger with Tiger was happening! 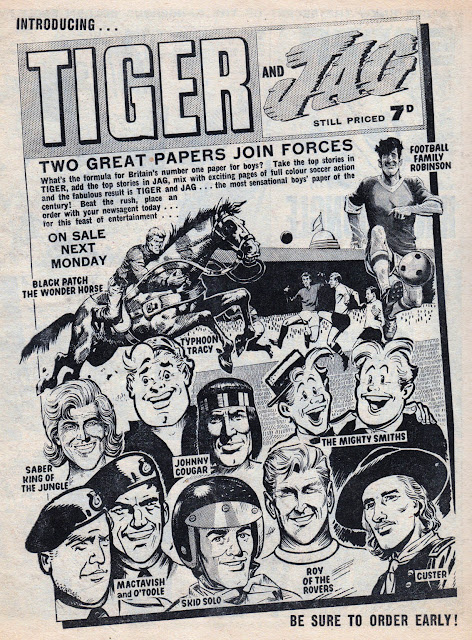 The new combined Tiger and Jag included not only the best of Jag's stories but also gained the superior paper quality that Jag had been using, upgrading Tiger from newsprint to web offset printing...
Changes were happening thick and fast. The long running Eagle was the next comic to face the axe with its April 26th issue... 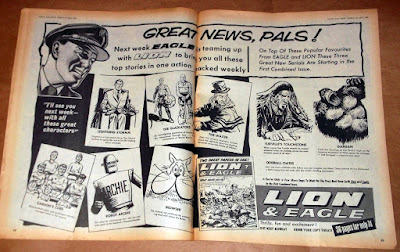 ...merging into Lion the following week...
With comics falling by the wayside IPC chose June of that year to launch a new comic for girls. Its title was Sally.

Over at City Magazines, another merger was afoot, with Joe 90 Top Secret ending in September after just 34 weeks... 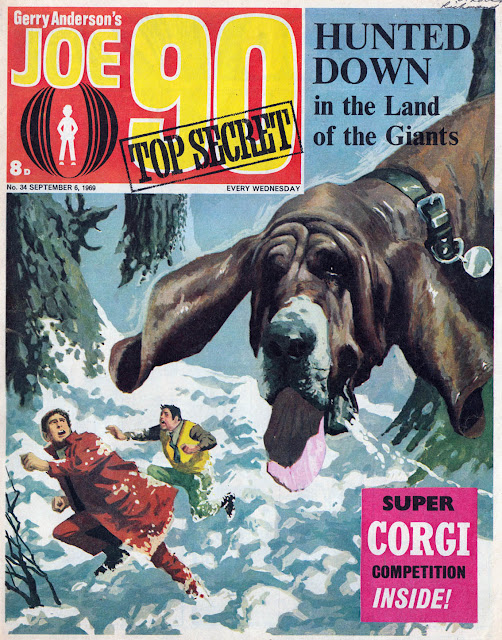 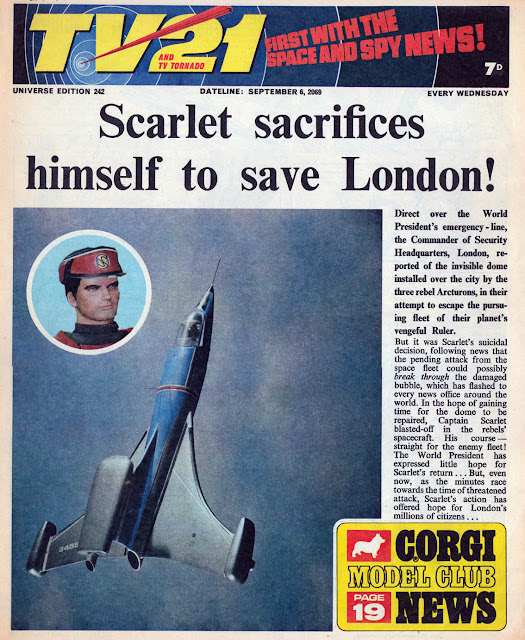 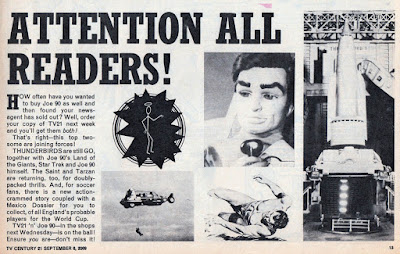 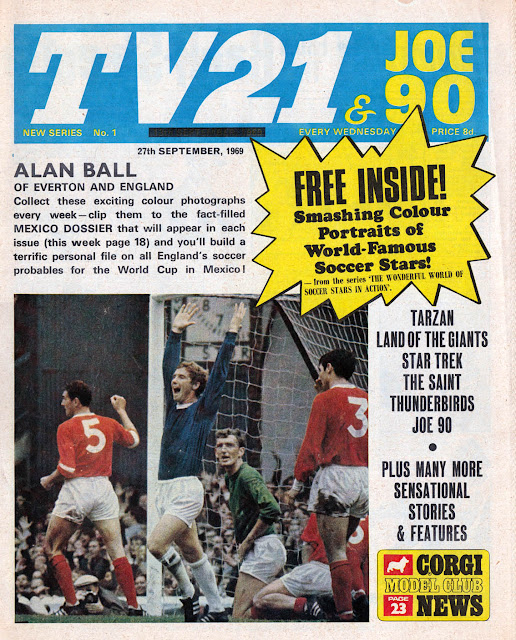 Time for something new? IPC's first humour comic, the first of many, was launched in October 1969 as Whizzer and Chips made its debut. A far more restrained and "safe" comic than titles it had replaced such as Smash! and Wham! but it became very popular... 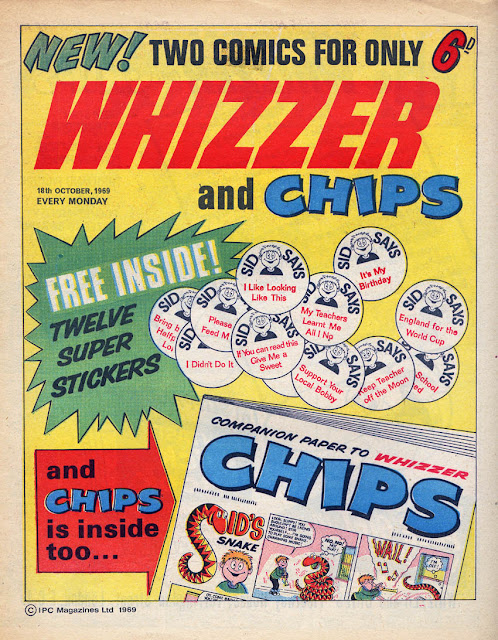 Finally, also around October of that year, Top Sellers ventured into the superhero market with Super DC, featuring edited and resized reprints of 1960s Superman and Batman comics. Not as good as Odhams' Fantastic which had reprinted Marvel strips and had ended twelve months earlier, but it was the next best thing...
What a year! Back then, I was disappointed to see my favourite, Smash!, change so drastically but I persevered with the new version on and off and came to like it. Same with TV21 which was far past its best by 1969. Yet I still loved comics and so Tiger and Jag and Sparky became my two new regular buys. Things didn't feel quite the same though, and a lot of the magic of comics was gone for me by the end of that year. As the years passed I soon realised that it was just a process of growing up. Change was always a constant in the comics industry, for good or bad. Sometimes it was a disappointment but other times it really was, as the ads told us, "exciting news". May of 2020 will see Rebellion revive Smash! as a one-off special, and it'll be as significantly different as its first two incarnations. Comics have always evolved to appeal to new generations, and that's the way it should be.

(All covers scanned from my collection except for Sally which is from the Comic Vine website. Sparky is ©D.C. Thomson, Tiger, Jag, Smash!, Sally, Lion, Whizzer and Chips, and TV21 are ©Rebellion Publishing, Superman is ©DC Comics.)

Email ThisBlogThis!Share to TwitterShare to FacebookShare to Pinterest
Labels: mergers

Great post Lew, I will really miss these when you close Blimey. You summed up 1969 in comics brilliantly there Lew and like yourself 69 was a special year for me and can actually recall picking up the new look Smash and Tiger with almost crystal clear clarity. I had totally forgotten about the Sparky reboot until your recent posts and the fact I used to pick this comic up. 69 was also the year I started to pick up US comics with my pocket money (as opposed to reading my big brothers comics).

I missed the Sparky revamp at the time (only bought those two issues shown recently) but I started buying it regularly around April 1969 and then stuck with it for a few years. Sparky had evolved into a great comic.

If there was one phrase to make an avid comic fans heart sink, it was "Great News Folks!" Yeah!? You knew then that your favorite comic had bitten the dust. Yes it was the `junior partner in a new `conjoined` title- but that wouldn't be for long.

I must admit there were times when I was genuinely happy at a merger. The first one I experienced was 'Pow! and Wham!' merging, which I thought made Pow! a stronger comic as Wham! had declined by then. Likewise 'Tiger and Jag'. I didn't think much to TV21 and Joe 90 joining forces though.

Obviously this all happened because 1969 was when I first started reading comics - and quite right too. ��

Haha! It's all your fault, Sid!

Ok, I have to admit that first Sparky cover made me wince. Even in 1969 that must have been seen as a bit wrong.

Agreed. I really don't know what they were thinking. Sparky was a revival of an old 1940s character named Sooty Snowball. He should have stayed in the forties. Images like that had no place in the 1960s, the time of the Civil Rights Movement and Martin Luther King etc.

It's posts like this that make me hope you might change your mind about closing up shop. Really enjoyable. I was just 8 years old when all this was happening. I clearly remember the revamped Smash and loved the free gift. We also read TV21 and Joe 90 in our house. I remember Sparky and it's rather dubious cover star but never thought about it much at the time, being only a nipper. Unbelievable to see in this day and age. But I never really read the comic unless a friend had a copy. Thanks again!

I didnt know what the Sparky character was supposed to be when I first saw him as a kid I had to ask my dad and he asked me not to buy the comic again. I had no idea he was a revival of an old character, I wonder if there was any outcry at the time.

Thanks John, Paul. I'm afraid there'll be no more posts on this blog after the end of this year but I hope to still contribute articles to Comic Scene magazine next year. My other blog at lewstringercomics will continue though.

Back in 1969 was Little Plum 'an outdated racist caricature'?

It wasn't seen that way at the time but society has changed since then and Plum is no longer in the comics.

Another fascinating and enjoyable article Lew and very time consuming to research and compile no doubt! I only started reading comics in the mid-seventies so a few of these titles passed me by, but what struck me most was that even during the.’golden age’ of comics in the late sixties they were still always evolving and never staying still, which in the case of Sparky was obviously a good thing!

Thanks Steve. This article didn't take as much research as some really because I lived through it so went on memory and just scanning the covers. Yep, comics have always evolved. Sometimes not for the better but often it's been a natural reflection of changing times and tastes.