Review: THE LEAGUE OF EXTRAORDINARY GENTLEMEN - THE TEMPEST No.6 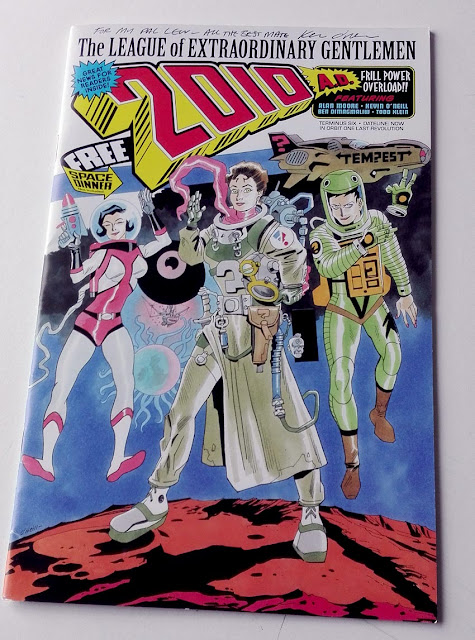 Catching up with reviews and this one has been difficult to do. Not because there's anything wrong with it. Far from it! It's as skillfully crafted and enjoyable a comic as you could wish for, but it's also the final comic that Alan Moore and Kevin O'Neill are producing and that left me with a feeling of sadness. Yes, they're both retiring from comics and this issue is their swan song.

I've followed the careers of Alan and Kevin throughout their entirety, and they were good friends to me when I started out in this business, so although I wish them both a very happy retirement from comics it's tinged with melancholy that we'll not see any new comics from them again. But let's not look at it as a glass half empty, but as a glass half full and topped up with a measure of quirky lunacy and spectacle that only these two gentlemen could deliver.

Continuing that drinks metaphor, this final issue of The League of Extraordinary Gentlemen: The Tempest is like a cocktail that your mates would buy you in Majorca in 1989 that would have you chasing the girls around the tables and you wouldn't remember a thing about it the next day if it wasn't for photographic evidence. But the less said about that the better. Let's move on to reviewing the comic shall we? 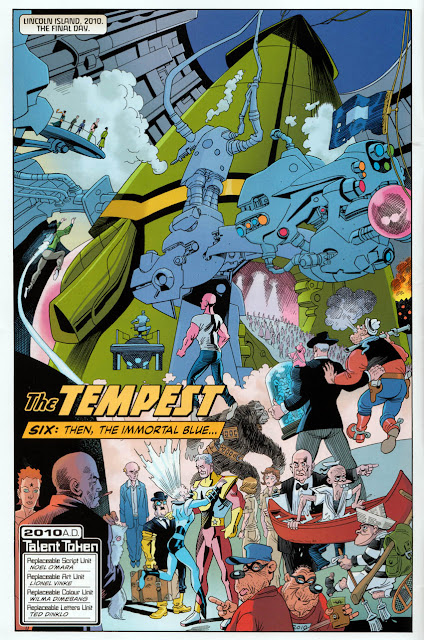 As with the previous issues, The Tempest No.6 begins with a cover spoofing an old British comic. In this case it's the early cover design of 2000AD, obviously a deliberate nod to the time when Kevin O'Neill was on staff there. Naturally, Kev's art is superb but let's also respect his wonderful skills as a designer on the covers of this series and their spot-on parodies.

Inside, there's another prose tribute to a "Cheated Champion of your Childhood" where Alan and Kevin tell the story of a UK comics giant. In this issue they pay respects to the great Ron Turner.

The story itself is a fitting ending to the saga of The League of Extraordinary Gentlemen. As those of you who have followed it will know, the series has included a dazzling array of references to popular culture stretching back over history and this final outing manages to cram in even more. Actually, "cram" is not the best description, as although Kevin includes a staggering amount of detail, everything is clearly presented. You'll see numerous homages to characters you may have forgotten... and many you may never have known if you're younger than me, but it's all done with affection and a good dollop of dark satire. 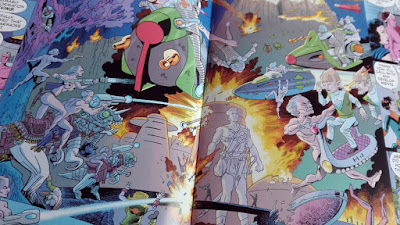 No other comic could bring together elements from Victorian / Edwardian fiction, James Bond, Rupert the Bear, obscure British comics, Gerry Anderson, Planet of the Apes, UK sit-coms and numerous other pop culture references and make it such a pleasurable experience. I won't reveal too much of the story of this final chapter, and indeed it references its own past in places so I'll need to re-read the series to fully appreciate it anyway, but it's a jolly good intellectual romp with a lot of giggles along the way. There's so many cameos in the comic that it'd be a crime if Alan and Kevin didn't turn up as well, as indeed they do in a brilliant nod to another comic of long ago.

It's a case of "That's All, Folks" then for our super-talented duo, but what a legacy of work they've gifted us, not only as a top class double act but also working with other creators over the years to produce some of the finest, funniest, and most thought provoking comics in the world. Most of us in this crazy business we call comic have had to compromise at times, or regularly, to earn a crust, but Alan and Kevin have both pretty much followed the vision they wanted to, and we're all the better for it. Happy retirement my friends, and thanks for all the entertainment.

It's taken me so long to get around to reviewing this issue that the collected graphic novel is also out now. A sumptuous hardback that's available to buy directly from Knockabout at this link:
https://www.ebay.co.uk/itm/League-of-Extraordinary-Gentlemen-THE-TEMPEST-Hardcover/202832371025

Here's the info from the publisher.... 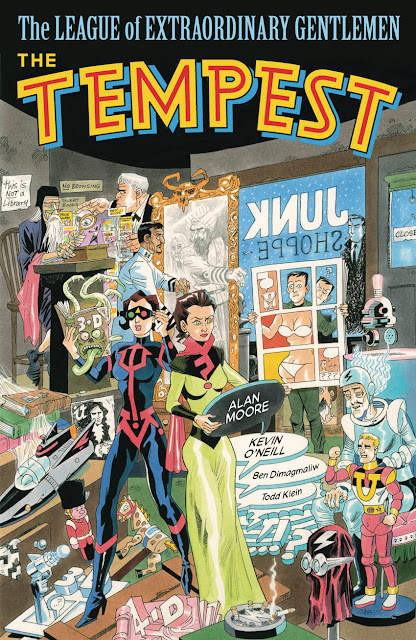 After an epic twenty-year journey through the entirety of human culture-the biggest cross-continuity "universe" that is conceivable-Alan Moore and Kevin O'Neill conclude both their legendary League of Extraordinary Gentlemen and their equally legendary comic-book careers with the series' spectacular fourth and final volume, The Tempest. Tying up the slenderest of plot threads and allusions from the three preceding volumes, The Black Dossier, and the Nemo trilogy into a dazzling and ingenious bow, the world's most accomplished and bad-tempered artist-writer team use their most stylistically adventurous outing yet to display the glories of the medium they are leaving; to demonstrate the excitement that attracted them to the field in the first place; and to analyze, critically and entertainingly, the reasons for their departure.

Opening simultaneously in the panic-stricken headquarters of British Military Intelligence, the fabled Ayesha's lost African city of Kor, and the domed citadel of "We" on the devastated Earth of the year 2996, the dense and yet furiously paced narrative hurtles like an express locomotive across the fictional globe from Lincoln Island to modern America to the Blazing World; from the Jacobean antiquity of Prospero's Men to the superhero-inundated pastures of the present to the unimaginable reaches of a shimmering science-fiction future. With a cast list that includes many of the most iconic figures from literature and pop culture, and a tempo that conveys the terrible momentum of inevitable events, this is literally and literarily the story to end all stories. Originally published as a six-issue run of unfashionable, outmoded and flimsy children's comics that would make you appear emotionally backward if you read them on the bus, this climactic magnum opus also reprints classic English super-team publication The Seven Stars from the murky black-and-white reachers of 1964. A magnificent celebration of everything comics were, are, and could be, any appreciator or student of the medium would be unwise to miss The League of Extraordinary Gentlemen, Volume IV: The Tempest. Welcome to the story to end all stories. Two decades of literary League lunacy have all been building to this, the most ambitious meta-comic imaginable.

I actually thought you might have been saving this for Blimey's swan song in a couple weeks. There's something poignant about you , Alan and Kev sailing over the cliff together.

Anyway, you say this blog is ending soon. If this December is as busy as my previous ones I probably wont see your final posts until February. So just want to say how much I've enjoyed your posts over the last thirteen years and I'll be forever grateful to you for enlightening me on two (almost forgotten) artists of my childhood - Brian "Moon Madness" Lewis and the great Ken Reid.

This is the end of an era in many ways, but I know you'll keep drawing and I'll certainly keep reading as long as Pat Mills is delivering scripts.

Not so much "goodbye" as "great news from your chum , the editor".

No, I just got way behind with reviewing comics. The intention of Blimey! wasn't to be a review site but it kind of went that way. I was always happy to plug the work of Alan and Kevin though.

Thank you for your kind words. My last post will be on New Year's Eve so there'll be a few before then. I'll still be blogging on my lewstringercomics.blogspot.com though so I hope you'll drop by there once in a while.