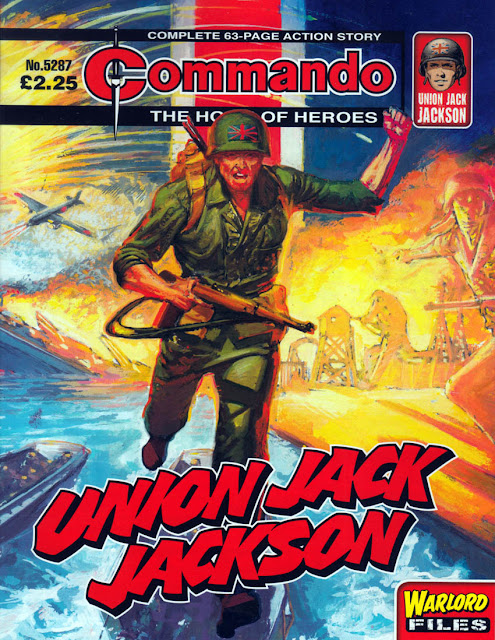 D.C. Thomson's Commando comic has been on fire this year with the revival of Code Name: Warlord and Braddock in recent months (along with the off-the-wall Commandos vs Zombies issue) and now this week Union Jack Jackson is back!

Union Jack Jackson originally appeared as a prose series in Hotspur in 1957, becoming a comic strip in 1962, and was revived in 1974 in D.C. Thomson's groundbreaking Warlord comic. He hasn't been seen since 1991 but now a brand new Union Jack Jackson story is in Commando No.5287, out now.

The issue, written by Commando's editor Georgia Standen Battle and illustrated by Paolo Ongaro retells Jackson's "origin" with a new story. It's fast paced stuff and very well accomplished, sure to be a hit with collectors and new readers alike. Hopefully we'll see him again soon, along with other classic characters.

Four issues of Commando are published every fortnight. Heres the lowdown on the other three editions that are out now...

There’s nothing like a Commando with two RAF pilots who hate each other’s guts — and Call It Quits has it in spades! Like chalk and cheese, Mike Boyd is a hothead show-off while Ian Harper is cool as a cucumber and by the book. What’s more, Mike has sworn to prove he’s a better pilot then Ian, but after writing off a Spitfire and getting branded as a menace, will the headstrong pilot ever be able to ‘Call It Quits’ with his rival?


5289: Action and Adventure: The Wombat and The Tiger

Brent Towns writes a fist-pumping action romp in The Wombat and The Tiger. As one outdated and one new Royal Australian Navy destroyer finds themselves outclassed and outgunned by a Japanese behemoth warship on the prowl in the shipping lanes outside Port Darwin, can the fiery Aussie crews work together to take down the devil from the Far East? Read it to find out!

When it’s cold, it’s freezing in Issue 5290 Destination Siberia! And you couldn’t get a frostier reception from the likes of evil NKVD Major Henkel — former SS Captain and member of the ruthless gang of murderers called ‘Henkel’s Hangmen’. Somehow, the scab of a man has wormed his way into the position of commandant of a Soviet labour camp where a specific German prisoner is being held. But two British men and two Americans were going to save that German and get revenge on Henkel to boot!

Got it.
Read it.
Collected it.