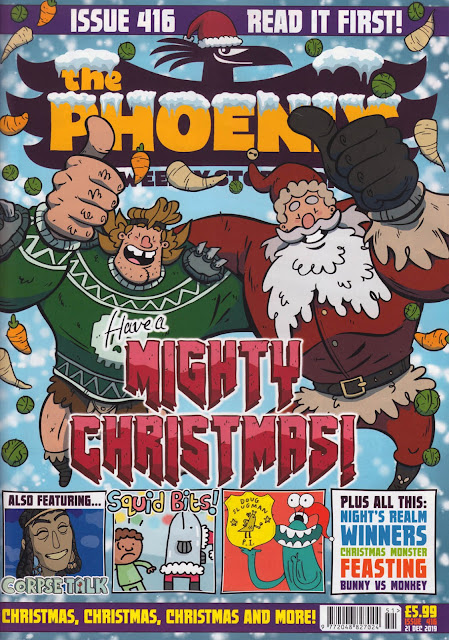 Back in the 1930s it was the tradition for comics to have a Christmas "double number" and be twice as thick because they were skipping a week. It's good to see that tradition has been revived for the last few years and this week's Phoenix is once again a bumper 64 page edition.

The gimmick The Phoenix uses is that the double issue has the second half as a flip comic, so when you reach halfway you turn it upside down and start again with the next cover... 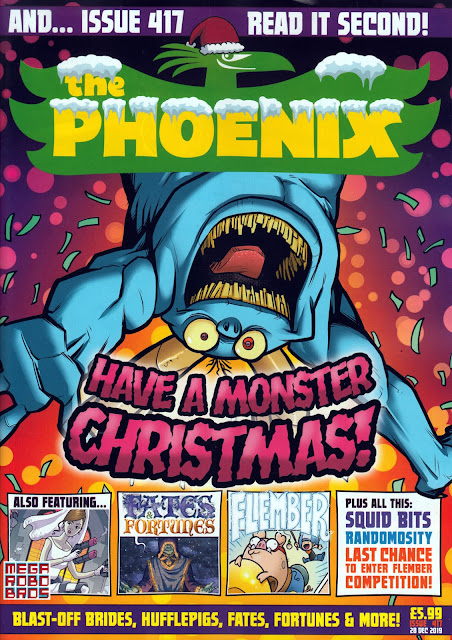 Yes, it's a seemingly expensive £5.99, but as you're actually getting two issues in one it's actually a little bit cheaper than buying two regular issues.

It's packed with good stuff too, so you're getting strips by Jamie Smart, Jess Bradley, James Stayte, Neill Cameron, Adam Murphy and more. The Phoenix tends to employ the relatively new comics creators, although I'm sure that's just them wanting to set their own style for the comic and not them being ageist. It's understandable that they want to forge their own path, and its certainly worked for them so far.

There's news in this issue that The Phoenix will have a new look in the New Year. I'm a little apprehensive about that because change for the sake of change doesn't always sit well with loyal readers. In fact, offhand, I can't think of a title in the history of comics that's boosted its sales by having a makeover, yet makeovers are sometimes necessary to bring it to the attention of new readers. However, as The Phoenix is mainly subscription-based I'm sure its readers will have time to get used to the revamp and will accept it. The stories will no doubt be as strong as ever and that's the main thing.

The Phoenix Christmas double issue No.417/418 is in WH Smiths now for £5.99 or you can subscribe at this link:
https://thephoenixcomic.co.uk

That reminds me - I need to get this and the Christmas Viz for my Xmas Collection. I got Beano but not sure if there is a Christmas Toxic.

Bear in mind that Toxic went reprint a year ago so if there is a Christmas issue, and I doubt it, it'll just be old material from me (that they haven't paid me a penny in reprint fees).

That's bad. Can you do anything legally, Lew?

Not really. Egmont own the five main Team Toxic characters.

However, I didn't sign away rights to every villain I created for the strip so I'll be using some of those characters elsewhere in the future.

"I can't think of a title in the history of comics that's boosted its sales by having a makeover," - maybe Sparky, when it introduced that new logo and Barney Bulldog in 1969? Notably, it definitely didn't work for The Dandy, which drastically changed it's look three times in it's last decade (the third one in 2010 finally got it right, in my opinion, but it never recovered from the losses of the Xtreme period). In contrast, Beano has gained readers since it's last revamp three years ago, hasn't it?

Phoenix has looked the same since it launched, hasn't it? After 417 issues - almost eight years - it's not really a surprise to see it get revamped. As for the usage of newer creators, they're probably just actively avoiding anyone known for being in The Beano, as you rightly say, because they're following their own path. Isn't Jamie Smart the only one who's been in both Phoenix and Beano? He drew Roger the Dodger at one point.

Were Sparky's sales higher in 1969 than when it started? I doubt it, and the Beano has increased sales over the last few years but that wasn't the result of a revamp.

Revamps give a temporary boost but they tend not to halt any decline in sales in a significant way.

Gary Northfield has also worked for Beano and Phoenix, as has Jess Bradley.