It was 40 years ago today that Simon and Chris Donald launched their little home made (or rather shed made) comic called Viz with a print run of (I believe) just 200 copies. They sold it in pubs in their home city of Newcastle and to say it caught on would be an understatement. By the 1990s it was selling over a million copies an issue (and read by even more, as it was shared around universities and classrooms) and became a national institution. The independent comic that outsold the established mainstream.

Chris and Simon retired from the comics biz years ago but Viz is still going strong, published every five weeks, ten issues a year, and edited by long-term contributors Graham Dury and Simon Thorp. It doesn't sell a million copies a month any more but it's still the top selling comic in the UK.

And, yes, it is as funny as it used to be. It was an honour to contribute to the comic on and off for about 20 years and I hope to do so again next year.

In the past, there have been parties and celebrations for the various anniversaries of Viz. I was at some of them. A bloke called Boris Johnson was at one too, wearing his bike clips over his suit trousers, putting a rolled up copy of Viz in his pocket. I wonder what happened to him? Screaming Lord Such, a much nicer politician, was at one event too. I liked him.

No party this time, but if you're in Newcastle next week you might like to visit The Stand Comedy Club where Simon and Chris will be performing their Donald Trumps comedy act. More details here:
https://www.thestand.co.uk/performances/772-8033-donald-trumps-20191217-newcastle/

Not many comics reach 40 years so it's an achievement to be proud of. The latest issue of Viz is No.291 and, like issue 1, is the Christmas edition. Out now! 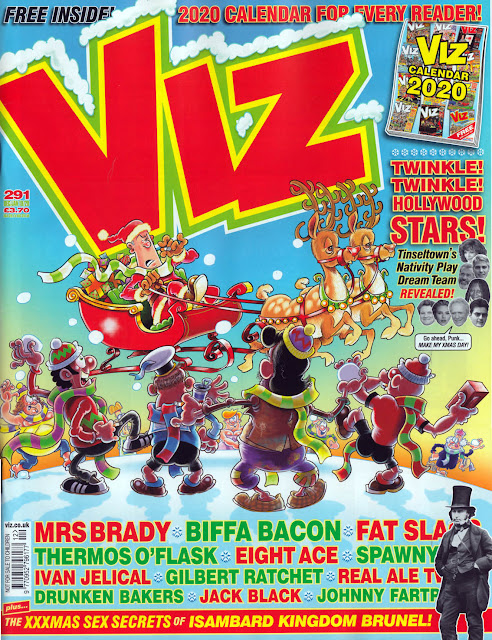 Further to your recommendation I saw the first incarnation of Donalds Trumps at the Stand in early 2018. It was a riotously funny evening, played in the style of a TV game show, with a host and two team captains, the titular Donalds. Rounds included 'Donalds where's ya troosers?' (a pair of trousers were photoshopped onto various locations and landmarks pertinent to the Viz story by one brother for the other to guess that location and then regale us with a most amusing anecdote relating to it for bonus points) and '_ankety _ank' (a Wogan style quiz show with added Ws where a word from a character's catchphrase or tagline was missing- the audience got to join in on this one was we had to write our answers on a card whilst the Donalds drew their respective characters, again very similar to Les Dawson's missing word quiz from the 80s); They also threatened a round relating to the antique value of Viz things I've bought off eBay, which was inspired by Tim Wonnacot, David Dickenson, Jeremy Hunt (I said Hunt), et al, which would have been called something like 'Bargain Hunt' (I don't mean Hunt) if they'd got round to doing it... It's a brilliant night and well worth about 50p less than the price of admission*.

Still an avid reader and collector of Viz to this day, I would have been going to the not especially important 40th anniversary iteration of Donalds Trumps, but for the fact that I will be celebrating Madness' 40th birthday in Camden Town the same night. Never ones to miss a trick, Madness appear in a spoof feature in the latest Christmas issue of Viz, out now. Titled 'From Isambard Kingdom Brunel to Madness-The Story Of Modern Britain' it could only be Viz comic, despite it being about 17 years since there was last a Donald brother writing Viz.

*actual value of show in relation to ticket price may settle in transit.

Brilliant stuff! Thanks for commenting, Paul!

Billy the Fish was my favourite strip. One had to laugh at the cliffhangers in that serial - and how they used Deus ex machina to resolve them the next week.

Mothra, from the Godzilla movies, showed up during one match, but next week's instalment revealed it to be a cardboard cut-out. Another cliffhanger saw Billy the Fish, a goalkeeper, found guilty of treason and executed by a firing squad, but next week's strip revealed he was dreaming; he had simply knocked himself out on a goalpost during a match!

It did elicit huge laughs from me at times. Johnny Fartpants, who had a flatulence problems, had it so bad one day that he ruptured the space-time continuum and created a time warp. Who could fail to laugh at such absurdity?

The letters page made me laugh, too.

It's nice that it's still going strong.

Interesting that so powerful was Viz's parody of weekly comics that you remember it as a weekly, not 10 issues a year. :) I liked Billy the Fish too.

I remember some "pretenders to the throne". One was Smut. The other was Zit. I would suspect they lasted fewer than a dozen issues. Imitation may be the sincerest form of flattery, but sometimes one can try too hard!

I don't think it's a confusion over how often Viz is published. If I had a quid for every time the phrase: "next week..." appears in my Viz collection I think I could probably buy most of the collection again. It has been used as a fairly standard ending to cartoon strips, written features and spoof 'how it works', 'who is who and what do they do?- this week the mortuary', and 'the story of...' Most recently the strip illustrating I K Brunel's life ends with "next week Madness'

The next week's never pay off except in the case of the Deux ex machina device used for Billy The Fish. By the way thanks for spelling that out. Having spent a lot more time reading Viz than I have on the dramatic arts I had heard of the phrase, but didn't know exactly what it meant, other than being able to translate it into English.

Regards their competitors there are some brilliant anecdotes about them in Chris Donald's superb book 'Rude Kids'. Apparently one of the knock offs tried to sue another of the knock offs for passing themselves off as the other. On finding about this (and loving pool) Chris Donald reputably asked the Viz legal team if Viz could play the winners...

By the way I may have stumbled upon why the comic was called Viz. The Donald brothers claim not to remember. However they state that Monty Python was a massive influence on them as kids growing up. I have recently bought the new Norwegian Blu-ray Box Set of the series. One of the sketches uses the word 'viz' repeatedly. It is entirely possible that it got stuck in the back of their minds...

Whenever anyone asked me what 'Viz' meant I used to tell them it was an abbreviation of Visual Comic. It wasn't of course.