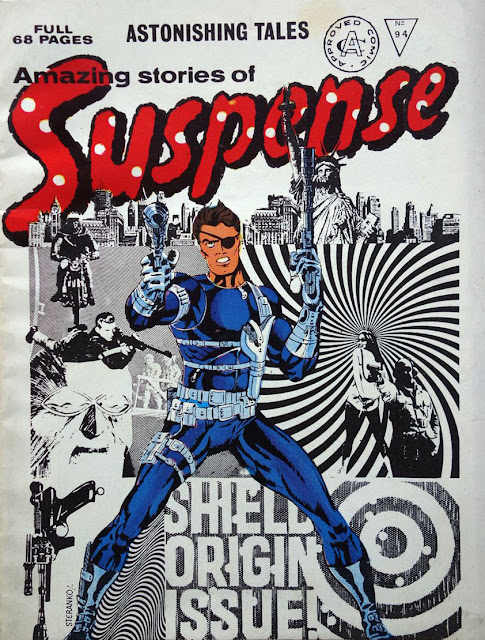 I loved Alan Class comics. For those of you who have never heard of them, they were 68 page black and white reprints of American comics. You'd get a mixture of strips from Marvel, Charlton, and ACG packaged into each issue. The selections were mostly random, so you might have a Fantastic Four story in there one month, but a Spider-Man one in the next issue, - regardless of whether the stories were cliffhangers or not.

Alan Class was the publisher and the comics ran for years, eventually becoming reprints of reprints, and with a publication frequency as random as their content, until one day they stopped altogether.

I wrote about them a few years ago (here) but the reason they're on my mind again today is that I just noticed that the eBay seller phil-comics has an issue of Amazing Stories of Suspense No.94 up for auction, which reprints Nick Fury, Agent of SHIELD No.4 from 1968. Yep, the one with that iconic cover by one of my favourtite artists, Jim Steranko, that many artists have since homaged in their own work. (The story inside is drawn by Frank Springer, by the way.)

This is the first time I've seen this issue since it was in the shops around 1969 so I thought I'd post the cover here, and of course acknowledge Phil with a link to his eBay page where you'll find many wonderful old comics:
https://www.ebay.co.uk/str/philcomics

I've got a copy of the American original. The only one I could afford.

The Alan Class reprints were my introduction to American comics.
First Fury#7 with the Dali cover. Inside: splash page of Fury as half skull (hours of madness day of death), next page: a dozen men fighting Fury but he's still moving, injected with lethal hallucinogen, next double splash of Fury falling from window into street, hallucinating wildly...
Then Fury#2: So shall ye reap death. The finest American comic ever, bar none.
My father would buy me one Class comic a week at the train station kiosk. But as you say, the material was completely random, he never found another Fury issue and I had to make do with The Fly & The Shield. Until the fateful day, I enquired of my parents of the character "Stretchpants Stella". When the comics stopped altogether.

I got the impression that Marvel never knew what to do with Fury, resurrected with ever diminishing returns, until he finally makes it onto TV and is played by ... David Hasselhof. Then Hitch & Millar deliver the Ultimate indignity: rebooting the character as ... Laurence Fishburne. These days Fury walks the Marvel wastelands, stripped of his infinity formula, his only appearances as LMDs.

Actually the Ultimate Fury was based on Samuel L. Jackson, who later played him in the movies. Not Laurence Fishburne. In the comics he's become the new Watcher on the Moon. Seems you've missed a few years. :)

It's a running joke to mistake Samuel Jackson for Laurence Fishburne. Ricky Gervais started it in Extras, then American TV AM programmes continued it as a wind-up.

I saw where Fury killed the Watcher, that's kind of what I mean.

Okay, I'll bite : who/what was Stretchpants Stella, and why did it cause Mike's parents stop getting the comic for him? I've tried Googling it, and the only results I get are for Stella McCartney stretch pants... which would be enough to stop me getting a comic!