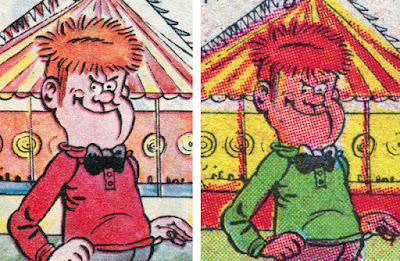 During the 1970s IPC were never shy of reprinting old strips and changing the character's names to try and convince readers they were new. Quite a few characters from Wham! were reprinted this way. The Tiddlers and Super Sir became The Horrors and Puffing Billy, General Nitt and his Barmy Army became Sir Hector and his Hardnuts, The Wacks became The Beat Boys... and so on.

In 1970/71, new IPC weekly Thunder reprinted Biff from Wham! retitled as Sam. Quite a bit of a dull change, that one. (No offence to any Sams of course.) Here are a couple of examples. Art by Leo Baxendale on the first one... 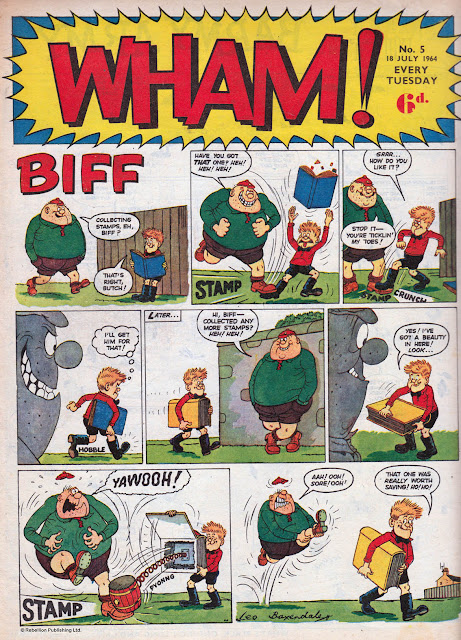 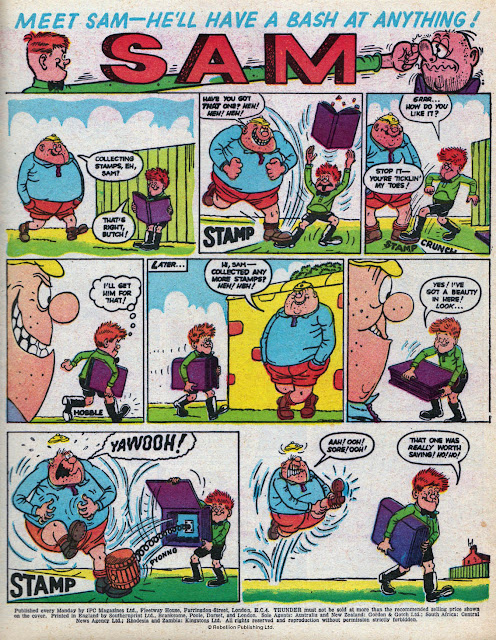 Apart from the name change, the big difference is that because the early issues of Wham! had a superior printing technique that allowed painted artwork, the art had to be recoloured using flat tones for the cheap newsprint that Thunder was printed on. (Otherwise the pages would reproduce in a muddy mess.) Unfortunately, any subtlety in the colouring was replaced too. Leo Baxendale's technique of having a face in the foreground in shadow, to give a sense of depth, was replaced by a flesh tone, making the bully look like a giant on the same level as Biff. The other big change is that Leo's signature was removed from the reprint. Although Odhams were happy for artists to sign their pages, IPC were not, - at least not in 1970.

This next example is drawn by Graham Allen... 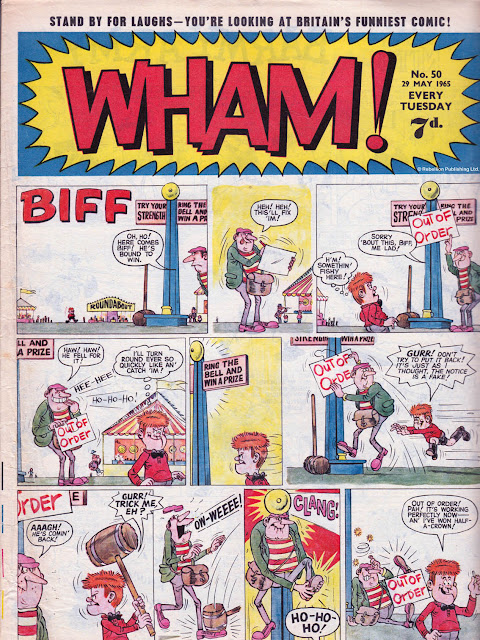 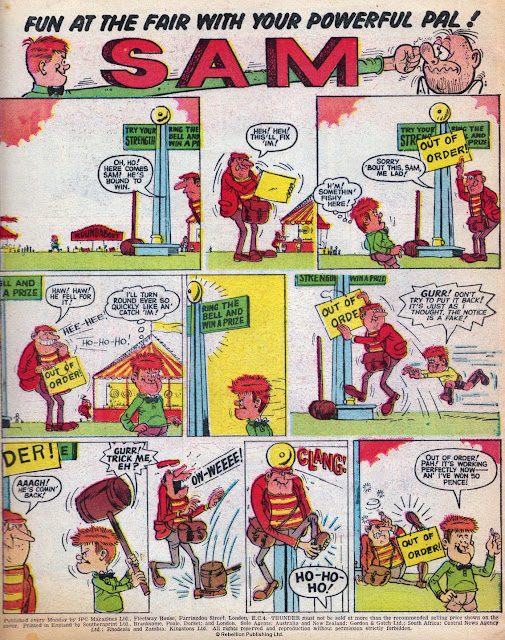 Reprints such as this were a major factor in why Leo Baxendale quit mainstream comics a few years later. (Bear in mind that creators received nothing for reprints.) The lack of respect that publishers showed towards creatives in that regard cost them a great artist/creator, and reflected badly on the UK comics industry for years.

always interesting to see the differences side by side...sad they got rid of Leo's signature...very cheap..

Seems a bit outrageous that they could get way with reprinting without any payment being made.to the artist. The difference in quality and finish between the original and the later reprint is order pretty dramatic.

British (and American) publishers took "all rights" back then, meaning that after a one-off payment for the first printing they could use the stories as often as they liked, change them as much as they wanted to, etc.

Or at least that's what IPC assumed. As I understand it, some artists never had contracts, so the publisher's claim to ownership might not be as clear cut as they thought. In most cases, characters were created by staff writers and/or editors, and an artist was commissioned to draw them, so in such cases it's clear that the publisher owns those characters (as anything created by staff is owned by the company, - same with any occupation). However, in the cases where a freelance artist has conceived the characters, written the script, drawn it, and created the strip entirely themselves, then taken it to a publisher, I don't see how that publisher could own the rights without a contract stating so.