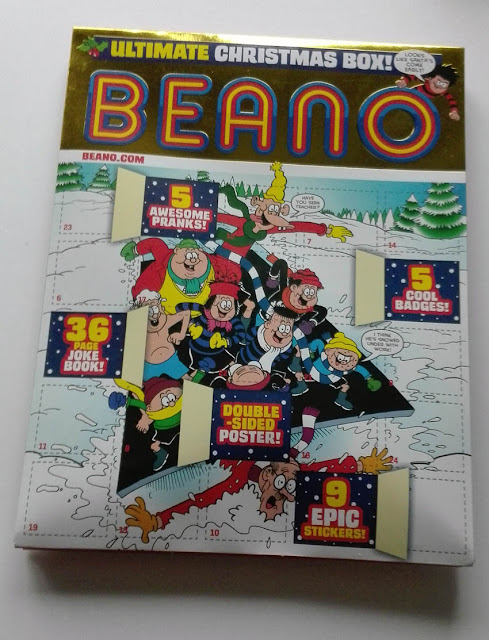 This year's festive issue of the Beano gives a new meaning to the phrase "Christmas box", as it is actually in a box! (Somewhat squashed in my local WH Smith, but still a box, albeit a slim one.) 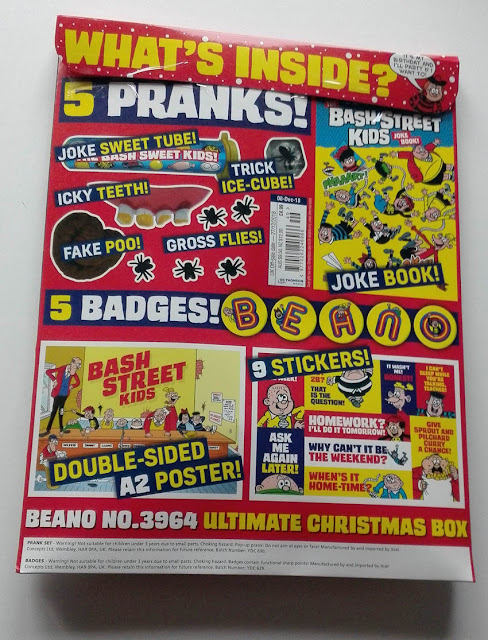 Headlined the Ultimate Christmas Box, Beano No.3964 comes packaged with a set of pranks, a joke book, a double-sided poster, 9 stickers, - and 5 badges... but unfortunately the badges were missing from my box! (A pity, as they look like the most collectable item in there, with each badge being a letter of the word BEANO, and featuring a tiny Bash Street Kid.) 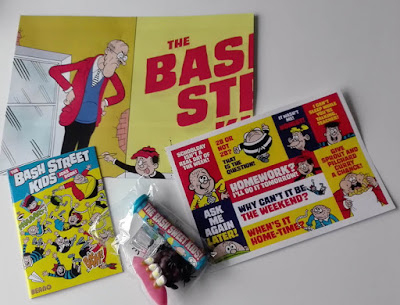 The comic itself is the usual 36 pages of fun, with all-new Christmas strips featuring the regular characters. I don't work for the comic these days unfortunately but you'll find top comic contributors such as Nigel Parkinson, Wayne Thompson, and Hunt Emerson in there. 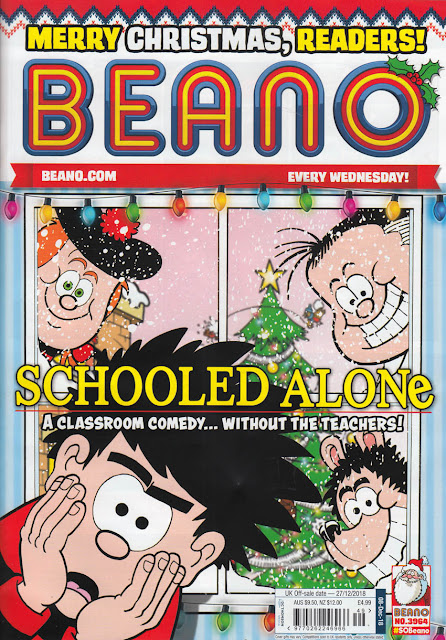 Beano No.3964 is on sale now in all good newsagents and supermarkets, and will be available until 27th December, priced £4.99. The next issue of Beano won't be out until 21st December. 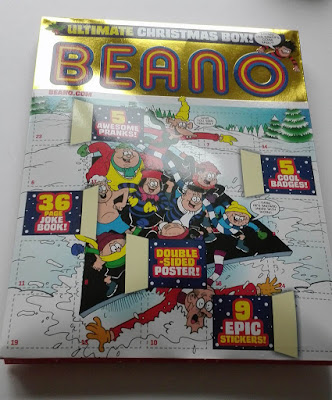 What, no snow on the logo...? Outrageous!

Apart from that looks fab, a proper Christmas treat.

Is there a Beano Christmas Special (bookazine) this year? I haven't seen one in my local Tesco.

Yes, oddly enough it came out in August!

Good for you, Varszava! Sometimes Smiths charge too much if they haven't adjusted their system after a special issue so always check your receipt!

Nice that the gifts are focussed on The Bash Street Kids for once, rather than Dennis The Menace. I just can't understand why the Christmas fortnightly issue is on sale now : the next issue will be out just before Christmas, so wouldn't it have been better saving it till then? (Mind you, I still can't fathom why the Radio Times etc. feel the need to bring out out three issues - covering four weeks - in the space of a week in the lead-up to Christmas!)

Simple. The longer the Christmas Beano is on the stands (three weeks) the better chance it has of selling, not just to regular readers but to newcomers attracted by its festiveness.

As for the Radio Times, and all other TV mags, they publish a bunch of issues in order to get ahead for when the double Christmas/New Year edition is published. Again, there are people who only buy the Christmas issues, so the longer it's available the better. The Xmas TV Guide is already out, and I expect Radio Times, TV Times, and the others to follow tomorrow.

The other thing is that production schedules have to get ahead for the Christmas season due to holidays / limited service from printers, suppliers, distributors, etc.

Yeah, it's not just Beano and the TV guides. My Mum buys Chat magazine. The one that went on sale yesterday was a bumper double edition, and so was the previous issue two weeks ago. I think the other similar women's weeklies do the same thing. It means that, like Beano, they publish 50 issues a year, skipping a couple of weeks at the end of the year. I assume that allows the printers to get the next couple of issues ready early, so they can still be shipped for release on their normal dates.

2000AD also publishes its Christmas issue a few weeks before Christmas. It'll be out on Wednesday.

Never Be Without A Bebno!

Anyone know where I can pick an intact copy of this up from. Got x 2 for the cousins but need a 3rd - off to delivery late Xmas presents in Feb over in the states and they'd love them!

It's a bit late now, Chris. They went off sale a few weeks ago I'm afraid.

I know its a bit late and hence why i'm posting on here and not picking one up in the shops, what I was asking is does anyone know where I can pick up a copy seeing as this is a Beano blog.

What I meant was I don't think you'd find one online now, but good luck.

People tend not to read old posts here very often so you might be better off contacting the Beano.