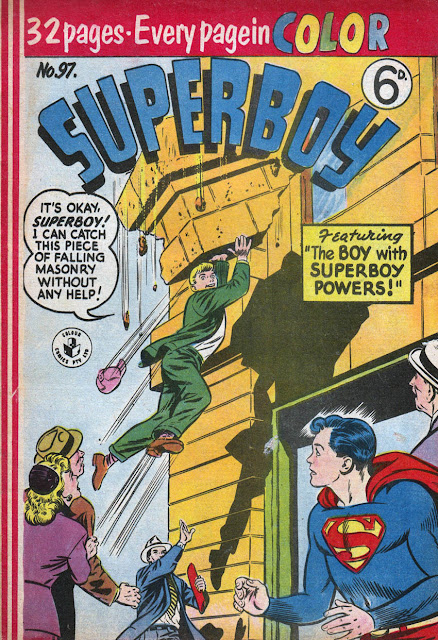 Back before Titan Comics, before London Editions, even before Super DC, reprints of DC comics appeared in the UK in the 1950s. Many titles such as The Flash and Challengers of the Unknown were published in Britain, but some were produced in Australia, sold down under, with some copies imported into the UK.

It might seem crazy now, but the import restrictions between the USA and UK that arose during World War 2 were still in place in the 1950s, and apparently it was easier to import reprints from Australia than the originals from America! 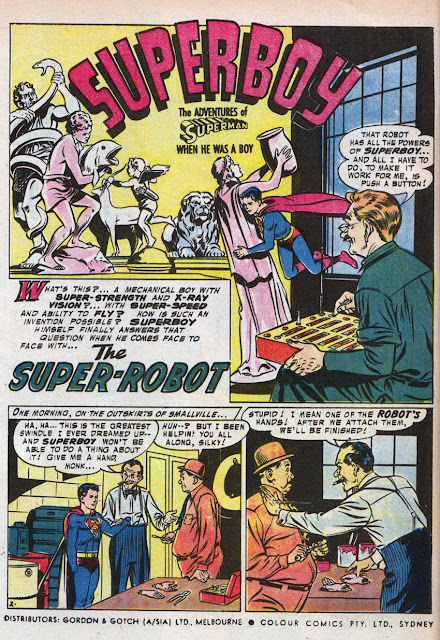 Right away, there are big differences between the Oz edition and the American original. The Australian Superboy comic is printed on rough newsprint throughout, including the covers. Secondly, the stories have all been recoloured, - and although they attempt to follow the original colouring the reprint version is crude and sometimes off-register. Worse, some pages lack flesh tones, giving the characters pasty light yellow or white skin! 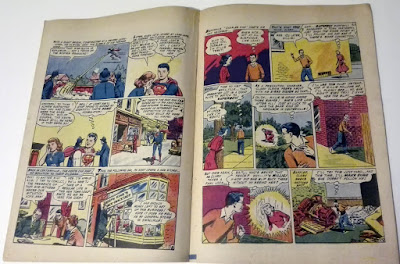 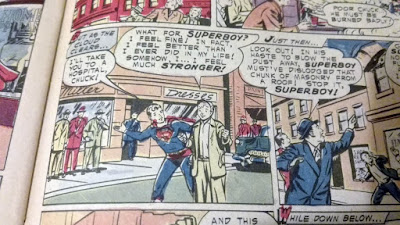 Onto the positives, the comic is packed with stories, with 30 pages of strips, giving the reader one extra story compared to the U.S. comics. In this case, the bonus story is Zarara in Three Tasks for a Hero, which originally appeared in World's Finest Comics No.45 in April 1950. (The Superboy stories in this issue are from 1955 /56.) 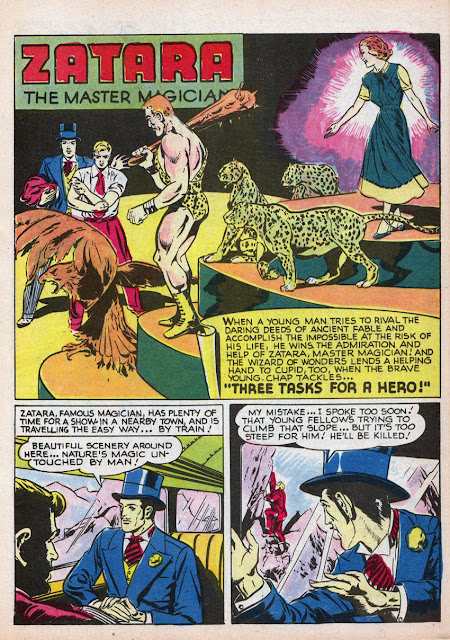 This issue would have appeared on the stands in the late 1950s. Like most UK (and Australian) comics that imitated the American format, it was priced at 6d. Not a bad deal for 30 full colour pages, back when most UK comics still only had a few pages in colour. Obviously it was popular as this issue 97.

According to Comic Vine, the Australian Superboy comic ran until issue 129, which reprinted Superboy's Voyage to Krypton from U.S. Superboy No.74 (July 1959). That adds up, because 1959 was the year that normal service of U.S. comic imports resumed in the UK.

I had some Aussie DC reprints back in the day. A couple of issues of Superman, Superboy, Batman and some Westerns.Only the covers were colour though.

Yes, for most of their history Aussie reprints were in B&W; this particular issue is from one of the rare periods when they experimented with colour.

Although Australian import restrictions on USA periodicals were abolished around the same time as the British ones, these Aussie reprints, mostly of DC material, persisted up until the mid 1980s. Some of us who grew up with them still collect them obsessively - even though, as kids, we'd much rather have had the American originals.

There's an excellent website on Australian reprint comics at https://ausreprints.net/

Now I want to know about Millie Trent's apparent power to be in two places at once. The Internet does know this story, but only reveals that the Kent home was destroyed by a meteor (!) and they are hiding out because revealing that Superboy saved them would give away his secret identity, this is the only comic in which Millie Trent ever appears, and someone called "Billie Trent" also appears. So I infer that Millie has a twin sister! And maybe that is a clue to solve the Superboy identity problem...