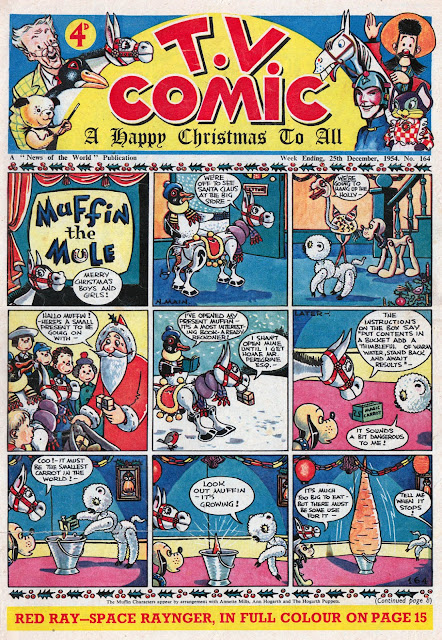 The second in our flashbacks to Christmas Past comes in the form of TV Comic No.164, dated 25th December 1954 (but published several days before of course). Back in the early years of this comic, it was aimed at a very young audience, and Muffin the Mule was the cover star, drawn by Neville Main.

The Muffin strip continued onto the foot of the centre pages, which it shared with three other strips. I have to mention that this issue was in poor shape when I bought it, with tears and chunks ripped out, so please excuse the state of it. 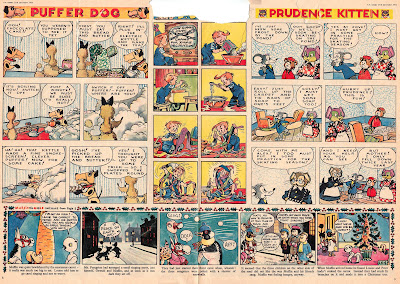 Another popular character in TV Comic was Sooty, based on the glove puppet. He had legs in the comic strip though! Note who the artist was, - Tony Hart. Yes, the same guy who appeared on television for many years, known for Vision On, Morph, and Take Hart amongst other shows. 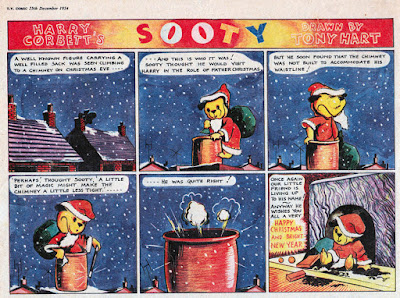 TV Comic in 1954 had 16 pages, comprised of 8 in colour, 8 in black and white. Here's one of the monochrome pages; the lyrics to Silent Night and a Nativity image by Barbara C. Freeman. You can't get much more Christmassy than that. 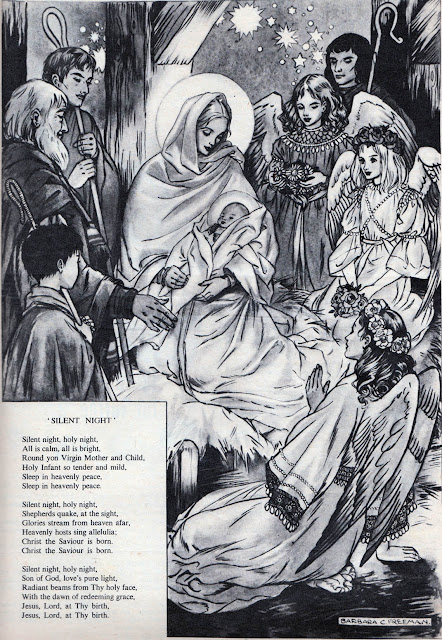 The Holland Toffee Twins is, presumably, a sponsored strip by Holland Toffees. Having adverts as comic strips was a nice idea that doesn't seem to be used in UK comics now, although DC Comics in America are currently running ads for Snickers in comic strip form.

Finally in this selection, here's Red Ray, Space Raynger, drawn by Roland Davies. Interestingly, this British superhero was not based on a TV show and was exclusive for TV Comic. He became very popular with readers, and even had his own fan club created by the publishers. 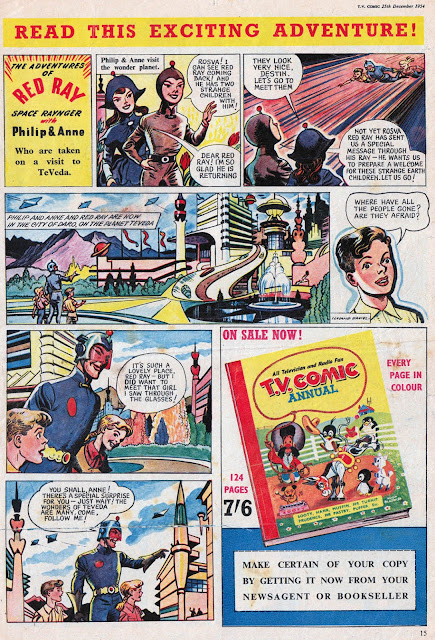 Come back again tomorrow for another Christmas comic from a different year!

I like the pencil colouring...also some top art...nice to see Tony Harts art on Sooty..

On the subject of comic strips based on adverts, I have -somewhere! - one (TV Comic, I think) from the late '60s/very early '70s featuring two dogs, based on adverts for some kind of dog-food. I was too young to remember if the characters appeared in the adverts, but I rather liked the comic characters.

I don't recall that one, Kevin, but I'm sure I must have seen it as at sometime or other I tried every UK comic (except for girls' comics) during that period.