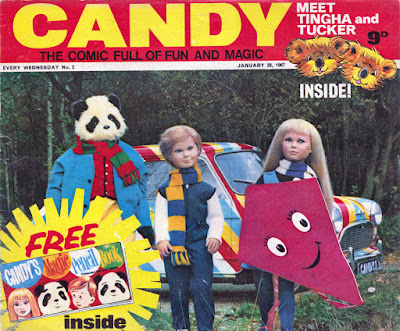 The last in my occasional series of Comic Oddities brings us to the weirdest one ever. It's hard to believe that the company that gave us the greatest comic of the 1960s in TV Century 21 also gave us the weirdest in Candy in 1967. Like TV21, Candy was a co-production between City Magazines and Gerry Anderson's Century 21 Publishing company. The concept was that as Anderson's puppet series had proved to be so incredibly popular then perhaps a comic featuring life-size mannequin children would also work. Er... maybe not. 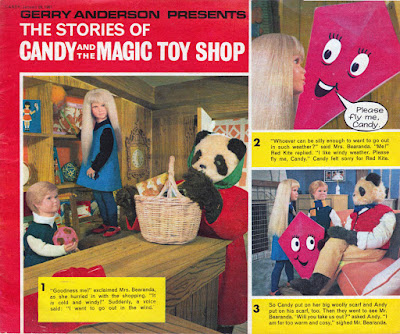 Gerry Anderson's puppet series worked because they operated within their own universe, and frankly it was the hi-tech craft, dramatic storylines, and explosions that thrilled all ages, and the puppets had personalities too, thanks to expert modellers and scriptwriters.  With Candy, all that was removed, putting the "puppets" (or in this case life-size dolls) in the real world, in twee stories for the very young.

If that wasn't creepy enough, Candy (and her brother Andy) were looked after by Mr and Mrs Bearanda... two adult-sized panda dummies. 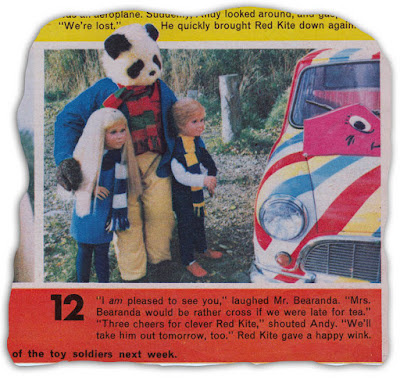 The results ended up looking very odd, unintentionally disturbing, and more like a comic created by David Lynch than Gerry Anderson. Adding to the weirdness, the comic was printed landscape rather than portrait sized.

The Candy and Andy photo-strip only took up a few pages in the 20 page comic (thankfully). Other strips were illustrated, and featured popular TV characters of the day such as Tingha and Tucker. art by Eric Kincaid... 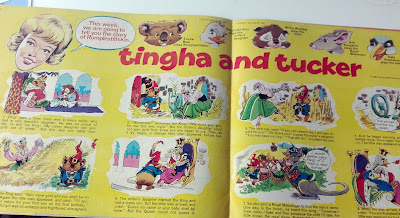 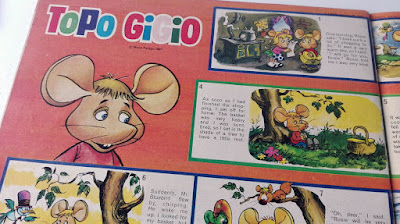 ...and characters from children's literature such as Winnie the Pooh... 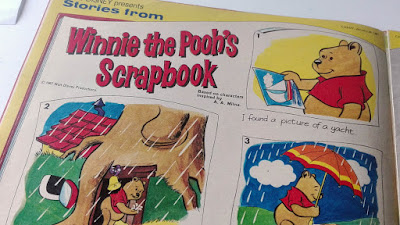 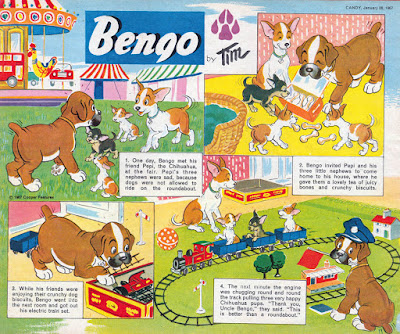 There was even a Thunderbirds comic strip! But... unlike any Thunderbirds strip we were familiar with. Aimed at nursery age children, and with it almost implying that the crafts were alive rather than being piloted. art by Gerry Embleton... 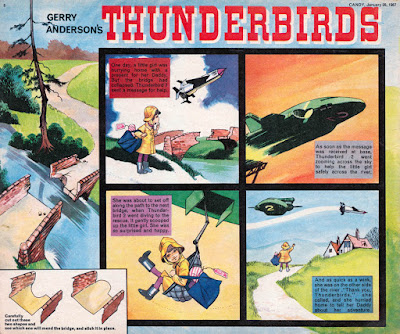 On the back page was Snap, Crackle, and Pop, a strip based on the characters from the boxes of Kellogg's Rice Krispies. This was the only strip in the comic that interested me when I was a child, and I remember being fascinated by the idea of those little characters secretly running around the breakfast table. The art on this is possibly by Eric Kincaid too, according to the ever-reliable Century 21 expert Shaqui Le Vesconte. 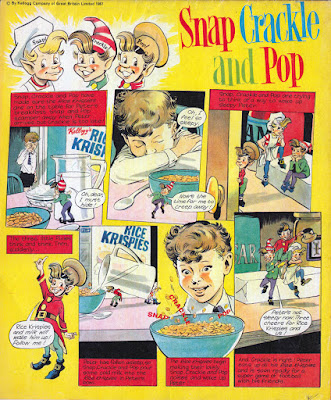 There were a few Candy and Andy Annuals. This one is from 1968 for the year 1969. Somehow the lighting and print quality on the annuals made Candy and Andy look more sinister than ever, like plastic versions of Children of the Damned... 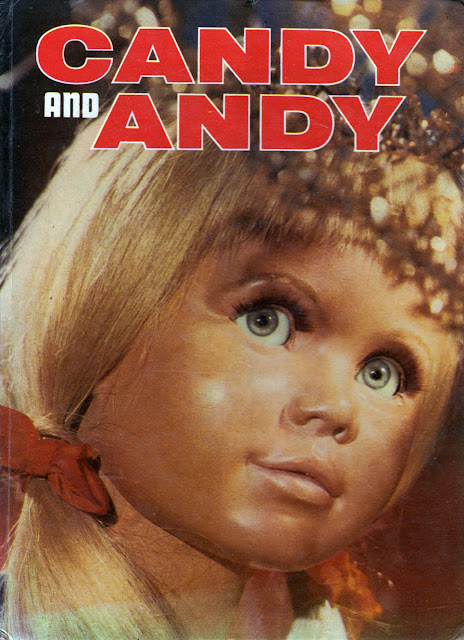 Presumably the idea of life-size dolls in photo-strips must have sounded good at some stage but I'm staggered it got past the suggestion phase. There's something very grimy and unpleasant about Candy and Andy's world, from the greasy looking dolls to the grubby looking house they live in. 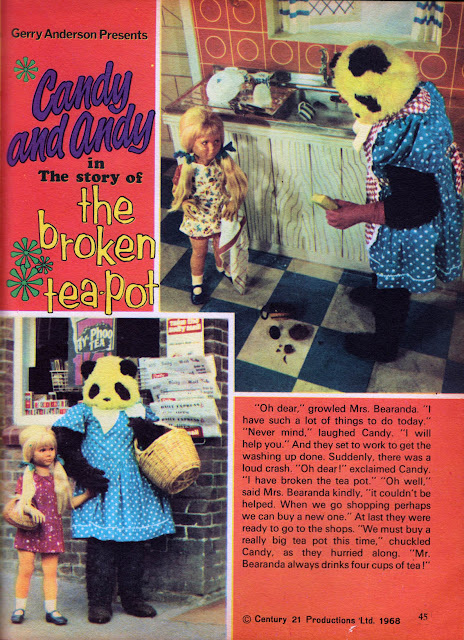 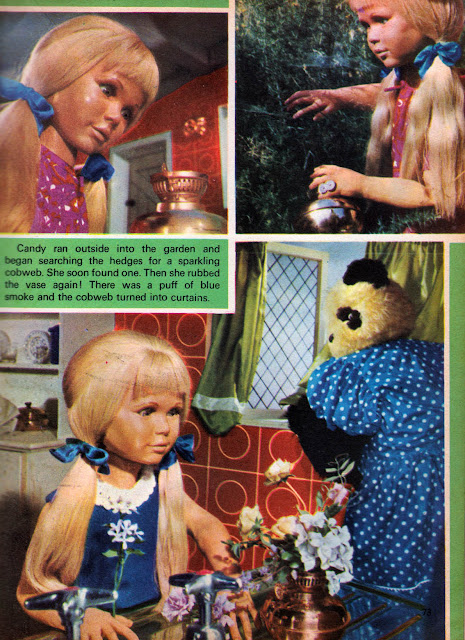 I think the publishers must have realised their mistake as later issues of Candy saw it dispense with the dolls and photo-strips and replace them with artwork and friendlier-looking characters. The format became more standard too, getting rid of the landscape shape. Some readers must have liked it though because it ran for 154 issues in total before merging into Jack and Jill in 1969. 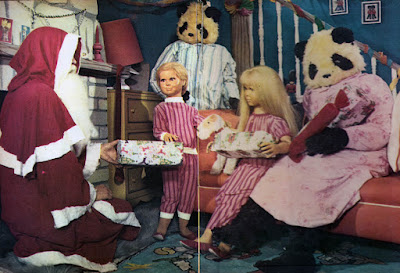 Today, early copies of Candy fetch high prices on eBay, so this weird comic oddity has some interest out there!

Update: Thanks to Shaqui Le Vesconte for identifying some of the artists.

This is one the most scariest comics I have ever seen. This would have given me nightmares as a child!! Well creepy.

And there are even more disturbing images in other issues I've seen. The whole concept is just bizarre.

I wonder if Candy and Andy inspired Dr.Who's Autons?

I was all ready to go: 'Oh wait, Lew, but what about...?
But no, you're right. Creepiest Kids comic EVER.

I loved the Anderson shows as a kid, but even so I thought there was a certain creepiness to the puppets, especially in close-up. The fuzziness of the television image softened the plastic look of the faces. The bright lighting and sharp focus in the comics do the characters no favors. As you say, the action in the TV show took our minds off the shortcomings of the puppets. It also helped that their mouths moved, which Candy's and Andy's obviously don't.

Eric Kincaid was a comic artist!?! I've recently picked up some children's books - such as Wind In The Willows - because I loved his artwork in them, so this is a huge revelation to me. Though seeing the Tingha And Tucker sample you included triggered memories of similar looking stories in comics aimed at younger children in the early 1970s, so I must have been seeing his work without even knowing it!

I didn't know either, Kevin, until Shaqui wrote to point out who'd drawn it. My first guess was that 'Auntie Jean Morton' was drawn by Mike Noble but I was mistaken.

Looks creepy now, but as a child, I remember enjoying it. I had a soft spot for pandas at the time

looks creepy now, but as a child, I enjoyed reading it. I had a soft spot for pandas at the time.