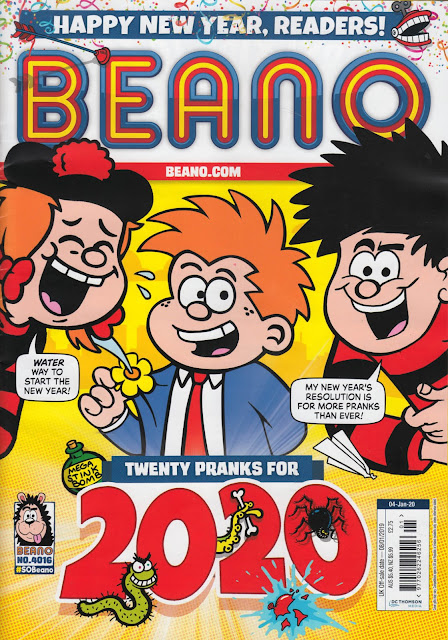 Here's the cover to look out for of Beano No.4016 which will be in the shops on Tuesday 31st December. Yes, a day earlier than usual because of the holidays.

As you can see, it's the New Year issue and it's celebrated inside with a four page Tricky Dicky story written by Nigel Auchterlounie and drawn by Rianne Rowlands... 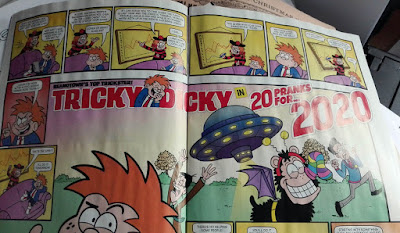 There are also 20 pranks from Tricky Dicky on following pages for readers to try out. (All harmless fun of course.)

All the regular characters are here too, including Minnie the Minx, Dennis and Gnasher, The Bash Street Kids and more. The mini-strips are back this week too, which means the return of Pup Parade... 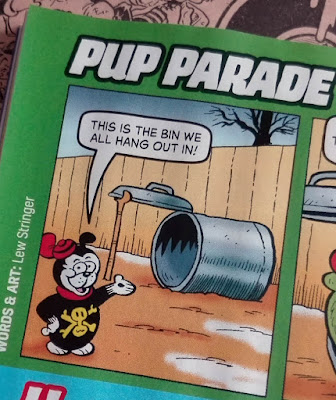 This was released early. Already got my copy from McColls, and it's still Monday!

Well, the official on sale date was Tuesday, just as it was last week. Shops and suppliers are a law unto themselves. They get the comics and mags early and are told when to put them out but the staff please themselves. Same happened with the Christmas TV Guide at some of my local shops, which was sold days before its official date. (Then the guy on the til couldn't understand why it wouldn't scan. Because it wasn't in the system!)

Because of Christmas, I couldn't get to the shops for last week's Beano. Not to worry, because I'd be able to get one when I went out yesterday. There were three left... but it turns out it was the new one, so because Sainsburys put it on the shelf a day early, I missed last week's! Grrrrrr! (Comic-style clenched teeth and waving fist!)

Yeah, the same happened to me about 10 years ago and I missed the Christmas Beano then. I subscribe now (we don't get free copies) so I make sure I get it, and it works out much cheaper too.

That's odd - apparently even the Newsstand website missed last week's issue, they're claiming this week's (dated 4 January, and they're showing the new cover with Dicky on it) came out on Christmas Eve.

Also, the current issue is cheaper than the next one, so it looks like the price is going up.