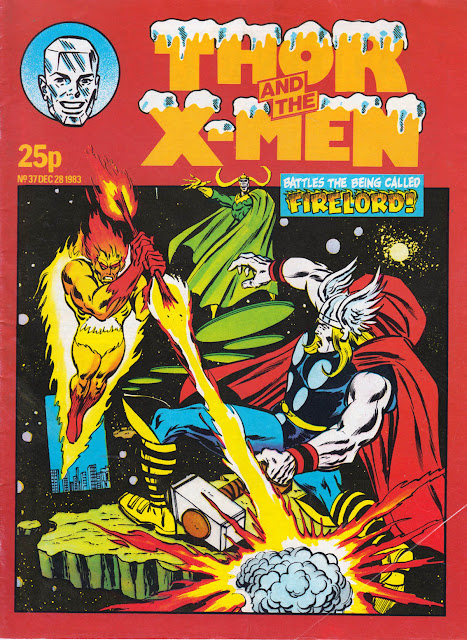 When is a Christmas comic not a Christmas comic? When it's a Marvel UK comic reprinting stories out of season I guess. The short-lived Thor and the X-Men comic from 1983 was a merger of two of their weekly titles and reprinted 1960s and 1970s material from their American counterparts.

The editor didn't have to make this a festive issue, as the stories certainly didn't reference Christmas, but snow still adorned the logo and Iceman appeared in the corner vignette so that was close enough. On page two, the Bullpen Bulletins editorial page (which would have also appeared in some of their other weeklies) also made references to Christmas, so all in all I'm calling this a Christmas comic. 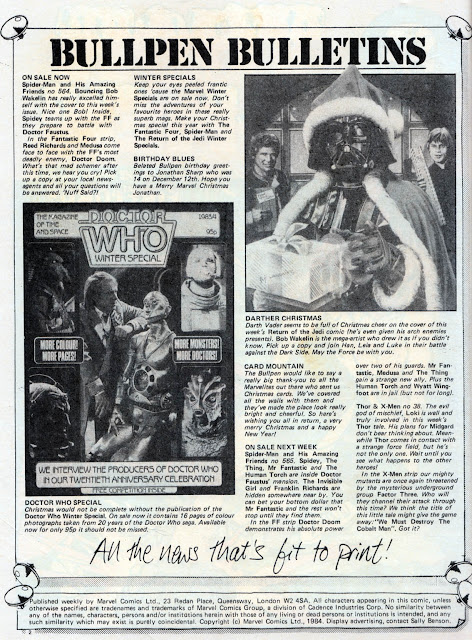 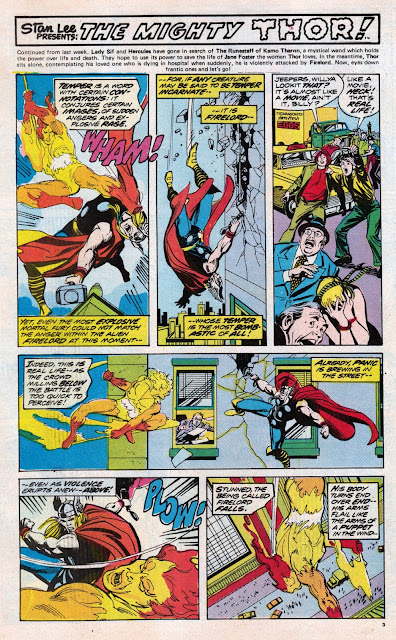 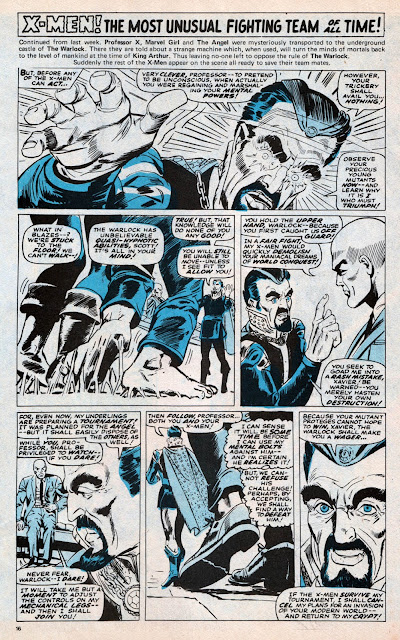 The rest of the comic included a few pin-ups and a readers' art page. There was also the classified ads page, where comic shops and sellers could advertise. How many of these comic shops are still in business? Nostalgia and Comics has become Worlds Apart, Forbidden Planet has moved and expanded to branches in other cities. What about the rest? 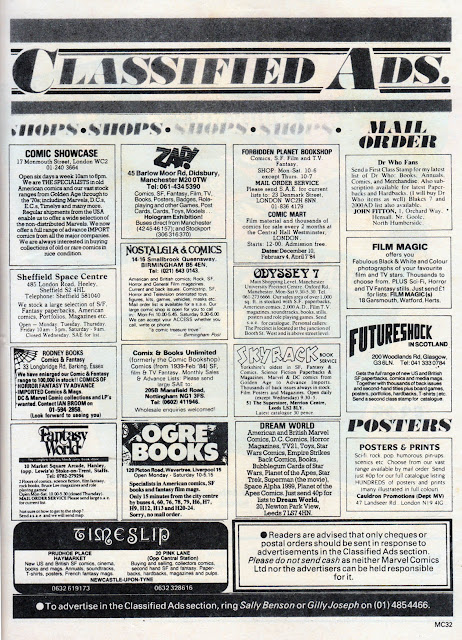 With it being Christmas, there were also adverts for the annuals that Marvel UK had produced that year. None of these TV shows appealed to me but I suspect those of you who are a bit younger will have enjoyed them... 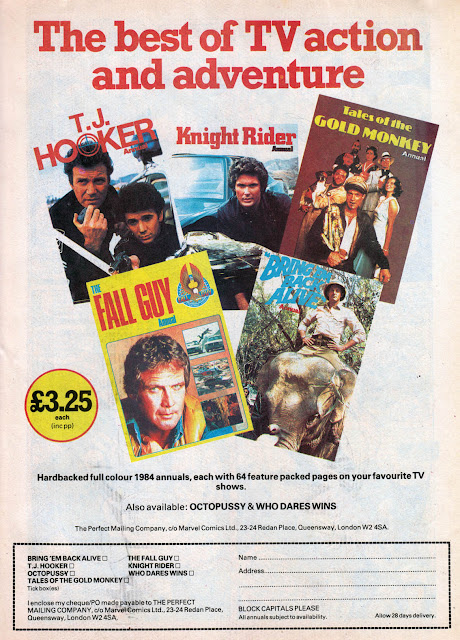 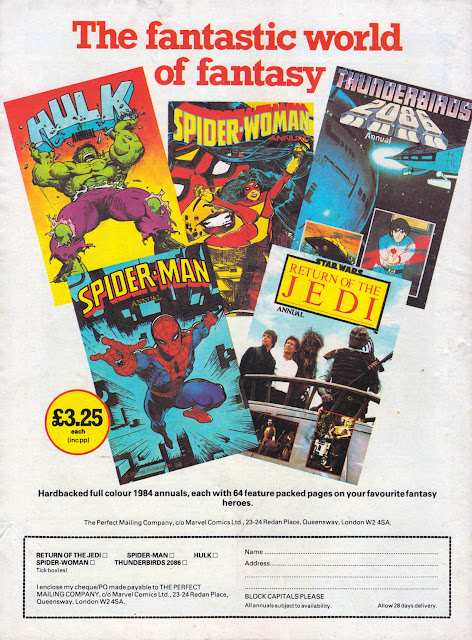 Sadly, after a run of many years, there are no annuals in the UK featuring Marvel characters this year. Surprising, as I would have thought at least a Spider-Man Annual might still appeal to kids, but evidently not. Times are changing fast.

Keeping that UK Marvel tradition alive, Panini editor Brady Webb always makes sure The Astonishing Spider-Man has a festive look every year. This week's issue is on sale this Thursday, 19th December. 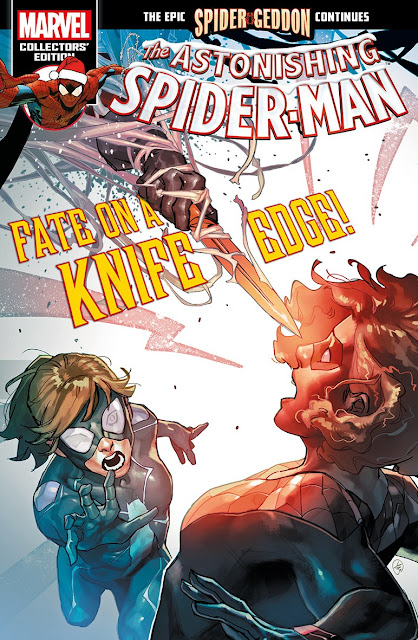 Panini's Spider-Man comic for younger readers also has a festive touch with Spidey swinging through a snowstorm. In the shops now. 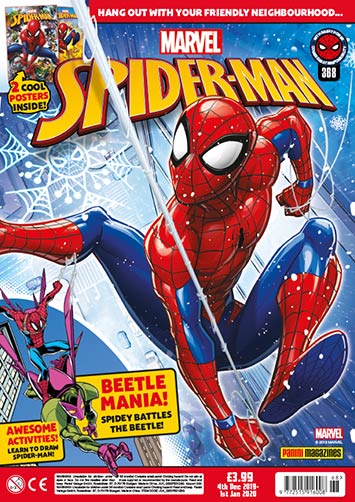 Another classic Christmas comic soon, and next time we're going way back!

Ogre Books was in business until around 1990 when he moved to Southport I believe. It was at Ogre Books around 1981 that I discovered the Ally Sloper Denis Gifford mag and the new SIG mag.

I missed a lot of the UK Marvel weekly comics from this time and dont recall seeing Thor and XMen at all. Furtureshock in Glasgow was in business until around 2015 when the owner sadly passed away, the shop remained closed for a few years after that until the stock was sold off. In its day it was a great traditional comic shop but was very run down during its latter years despite being in a great location

Sky Rack, open daily EXCEPT Wednesday? You wouldn't see that on an ad for a comic book store nowadays, considering Wednesday is when the new releases go on sale! I guess things were different in 1983.

Yes, Thursdays were the delivery day up until a few years ago James.

I think most Marvel UK comics didn't last long around this time, Paul. They'd used up the early material and the later stuff just didn't work very well chopped up into two or more parts.

Thanks for the info Nigel. I guess you missed Ally Sloper when it was in newsagents in 1976? Indie newsagents that is. I don't think Smiths took it.

I suppose the rival that Iceman most feared was Thaw.