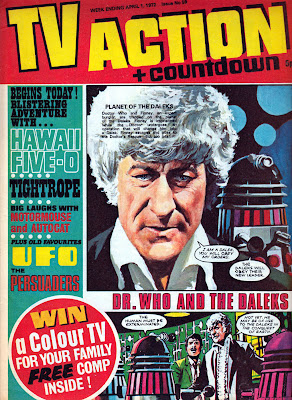 On this day in 1972 Polystyle's Countdown comic had a complete makeover and was re-titled TV Action.

Countdown had launched in 1971 with high production values and top class strips based on sci-fi TV shows and features about science and technology. Ironically, for a comic that dealt in science fiction strips, it was a bit behind the times because by 1971 the space race was over and many kids had diverted their interest elsewhere. During the course of its run, Countdown gradually broadened its focus, running a cover strip based on light adventure thriller The Persuaders TV series and tweaking its title logo to become 'TV Action in Countdown' and 'Coundown for TV Action'. Finally, with issue 59 came the major revamp into TV Action (or TV Action + Countdown as it was for the next 40 issues or so).

With the license to publish Doctor Who strips being its greatest asset since Countdown No.1, TV Action put the strip on the cover with superb artwork by Gerry Haylock. Inside, readers could win a 17" colour TV if they won the Draw Your Enemy competition. As you can see, I designed my monster but never sent it off. therefore The Clawhawk remained in limbo... until today! (Somehow I don't think I'd have won anyway.) 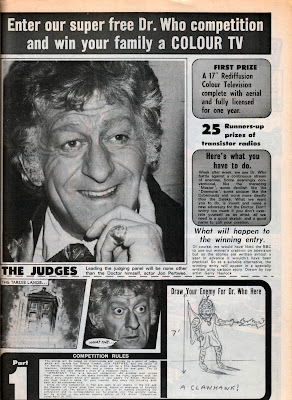 Interestingly, this competition is currently at the root of one Doctor Who fan's legal claim that he created Davros, which he alleges the BBC imitated right down to every switch and shoulder pad. Considering competition entries were sent to Polystyle and not the BBC, and that Terry Nation wasn't a judge, I have my doubts (to put it mildly).

If new readers picked up TV Action thinking it was a new comic they may have been a bit disappointed to find that so many of the strips continued from Countdown. The sophistication and space politics of the Countdown strip could go over the heads of regular readers sometimes so new readers must have been particularly confused. Nice artwork by John M. Burns though. 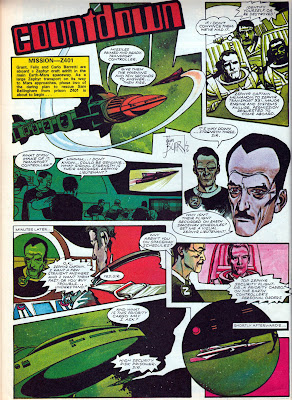 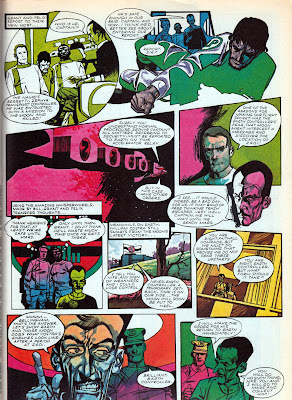 One of the new strips debuting this week was Hawaii Five-O, based on the highly popular Friday night TV series. One of the good things that TV Action carried over from its previous incarnation were the use of artist's credits. This was highly unusual for the period, when most artists for rival comics were still prohibited from signing their work. (Polystyle also allowed artists to sign their pages on companion title TV Comic.) 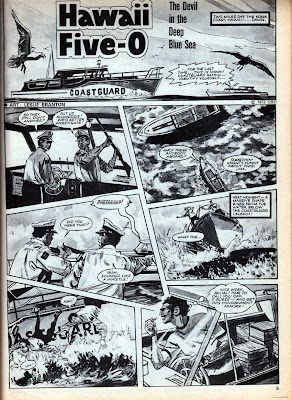 Relegated from the front cover, The Persuaders still had two pages inside the comic, and with Harry Lindfield on the art it was still impressive stuff. 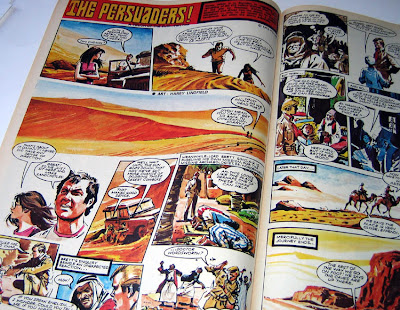 One of the best artists of the time was Brian Lewis, who had contributed many pages for Fleetway and Odhams in the 1960s. Drawing the latest UFO serial Let The Aliens Land, Lewis was able to take advantage of the high production values and embellish his work in a grey wash. 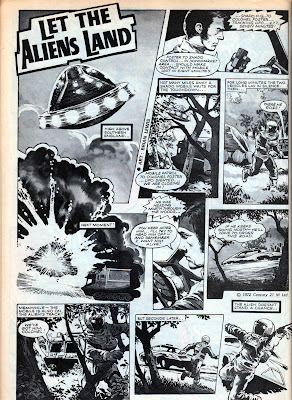 Other Gerry Anderson strips included new Thunderbirds adventures drawn by Don Harley and a Stingray reprint from TV21. There were also several intelligently written articles including one on the then-proposed Thames flood barrier. Like Countdown, TV Action tried not to dumb down to its readers. I doubt an article this in-depth would appear in a children's comic today. 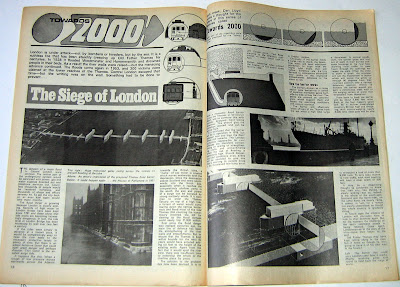 On the back page, the comic's token humour strip Hanna-Barbera's Autocat and Motormouse drawn by Peter Ford. 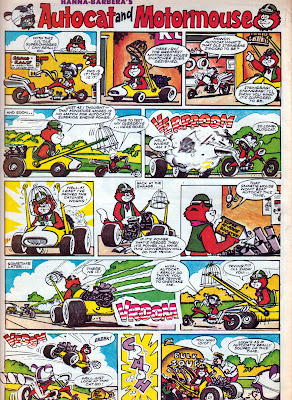 Of the comic's 24 pages, 17 featured strips, two of which were reprint. The rest were taken up with articles and "filler" as some might call it today. Yep, it wasn't 100% comic but we didn't care. Like Countdown before it, TV Action was an excellent comic but, outside of fan circles, it never really caught on in a big way. Nevertheless, the revamp as TV Action gave it a good boost and it carried on for over another two years, finally ending with issue 132.

My earlier blog post on Countdown No.1:
http://lewstringer.blogspot.co.uk/2011/02/40-year-flashback-countdown-no1.html
Posted by Lew Stringer at 00:01

The quality of British artists never cease to amaze me!

I seem to remember that John Burns' excellent Countdown strip didn't last many weeks beyond the name change. One thing I did like, however, was the way in which later issues reinstated the idea of an extra-long, self-contained story of one of the regular series in each week's issue. This could be especially worthwhile when the strip in question was something like Gerry Haylock's Doctor Who.

One 'Countdown' strip I liked was 'The Secret Service'. I had not seen the television series ( and would not do so for another twenty years! ) so it was very welcome, especially as it was an origin story to boot!

A great overview of the re-launched TV Action.

I had the pleasure of interviewing Gerry Haylock a few years ago. Gerry was astonished and humbled to learn that his artwork was still fondly remembered and held in such high regard.

I would note though that the 'TV Action + Countdown' phase of the comic lasted rather longer than 'several months' - that version of the title was retained right up to the end of 1972.

It's good to hear stories of veteran artists realizing how much their work meant to readers. So many of them probably never knew how enduring their work was as they didn't have the convention circuit to interact with other artists or meet readers.

I actually won a runner up prize of a small blue transistor radio.
I drew the Gorn (not very original name) it was a kind of human-bird-horse.
I've still got the letter from the editor somewhere.