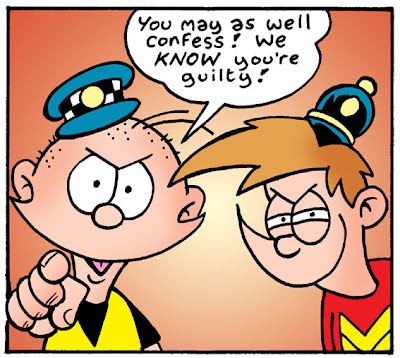 Just a quick plug for this week's Dandy which will be in shops on Wednesday 7th March, priced £1.99.

It's not easy being impartial about it as I'm one of the contributors but I genuinely feel it's on a high now with some very funny material from Nigel Auchterlounie, Jamie Smart, Wilbur Dawburn, Andy Fanton, Nigel Parkinson, Wayne Thompson and more.

Humour does of course depend on state of mind and whatever tickles your funny bone, but I think it's fresh, inventive, witty, lively, and it works for me (and thousands of readers). Britain's oldest comic has a spring in its step these days. Check it out and see for yourself. 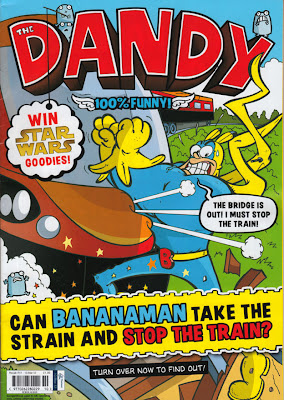 Cover of the latest issue by Wayne Thompson.

looks like dandy is now influenced by simpson comics - but im only looking at the cover.

Has Harry Hill gone for good?

@Adrian, Yes, unfortunately I believe so.

@Anon, I think it's a modern cartoon style that's in the zeitgeist. For example someone once asked me if I'd based Tom Thug on a Simpsons style until I pointed out that Tom pre-dated The Simpsons by a year or three.

I think the current design for Fred from Fred's Bed has similarities to Bart Simpson.

I see they're going for another turn-over cover this week. Personally, the Bananaman covers are a bit boring, the Desperate Dan ones are more witty but every week you see a dull picture of Bananaman doing something on the cover. RE: Simpsons similarities, I think Fred from The Beano's Fred's Bed slightly resembles Bart Simpson.

Funny enough, when Harry Hill was in The Dandy all I saw was criticism. Now everybody loves the strip. By the way, good Kid Cops this week, Lew.

Unfortunately, Toby (my son) seems to have drifted away from Dandy and gone over to The Simpsons comic.
Sad days indeed. I have to by it myself now!