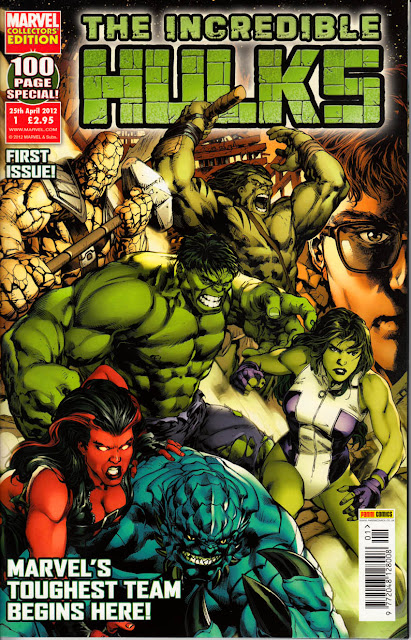 When Panini UK reluctantly had to close Fantastic Four Adventures last month due to falling sales another title was needed to take its place on the schedule. And who better than The Incredible Hulk, who will be one of the stars of the Avengers Assemble movie in a few weeks?

The Incredible Hulks No.1 is out now from WH Smith and other newsagents, with a titanic 100 page premiere issue for the usual price of £2.95. Yes, that's "Hulks" plural, for this comic reprints the recent American editions where ol' greenskin had a whole team of Hulks.

Personally I think the Hulk works better as a loner and I feel the addition of multi-hulks only dilutes the concept of him as one against the world. On the other hand, it's good to see new twists on the old concept. The Hulk has been around for 50 years now and "team Hulk" is just the latest spin on keeping the character fresh. I hope the title changes to Incredible Hulk (singular) soon though. "Hulks" just sounds daft.


This issue reprints stories from the American edition of The Incredible Hulks Nos.612 to 614. Next issue, the comic adds the Red Hulk with stories reprinted from Hulk.


The Hulk was the first Marvel character I saw, back when Odhams began reprinting his saga in Smash! in 1966 (see here for details). I've read it on and off ever since, so it's good to see him back in his own British title. If you haven't kept up with the character for a while this is an interesting jumping on point.

That sounds utterly ridiculous - Hulk was always a loner. I never liked Hulk but I preferred him more when on his own - I didn't like the adventures that also featured She-Hulk who irritates me just as much.

Plus that title is terrible. Still, maybe it will be all right. But I know I won't be buying any copies soon.

My favourite Hulk stories are those from the 1960s, although that's to be expected as they were the ones I grew up with. It was a great saga though; one long continued story, rather than the comparatively shorter 'story arcs' of other Marvel comics of the time. And it defined the character well as a sympathetic loner with the whole world against him. Giving him a family, even a dysfunctional one, moves too far away from the heart of the concept to me, but good to see them keeping the comic fresh anyway.

Same here. Loved the early stuff. Great artwork around then with Trimpe. I still get a warm feeling inside when I see Buscema's work as well. It seems that latter day Marvel have lost the plot with the hulk. Nothing interesting seems to have happened or worked for about the last 20 years (exception being Planet Hulk IMHO).

Picked up the first issue on a whim.

The Hulk has certainly changed since my day ! There's now a whole army of them and it's more of a space fantasy than a superhero comic.

I guess it's a tribute to the enduring nature of the character that it lends itself to this kind of re-invention. I think it's a bit of a shame though that supporting characters like Betty Ross and Rick Jones have been Hulked up.
Takes away from the uniqueness of the character. Can't really imagine Spider-Man's entire supporting cast suddenly getting the same super powers.