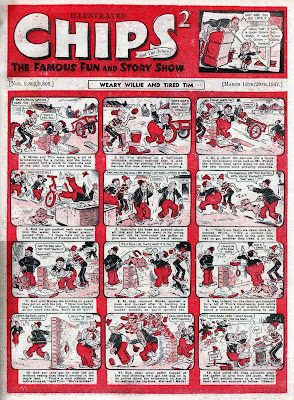 Beginning a new series of occasional features where I'll be looking back at a few strips from one or more classic comics related to the coming week. This time, it's the copy of Illustrated Chips that went on sale exactly 65 years ago this week in March 1947.

The first thing you may have noticed is that the issue number combines two editions and is No.2805/2806. However the page count remained the usual 8 pages. Paper rationing was still in force in these post-war years and because of this, Chips was one of the comics on a fortnightly frequency, but in March 1947 it skipped another two weeks. It seems the editor felt a four week gap necessitated a double number. (You'll note the date is also combined: March 15th/29th. The following issue wouldn't appear for another month and would be dated April 12th. After that it resumed fortnightly production.)

The cover strip, Weary Willie and Tired Tim, is by the brilliant Percy Cocking. Note that smoking is portrayed without any concern for health, as was the norm in those days.

Smoking was also a plot device in one of the interior strips, Peter Quiz, with "Marmaduke the man-hole man" asking young Peter for a light! The typical cause-and-effect sequence stretches credibility (just how weak is that lamp post?) but it's nicely drawn by Arthur Martin. 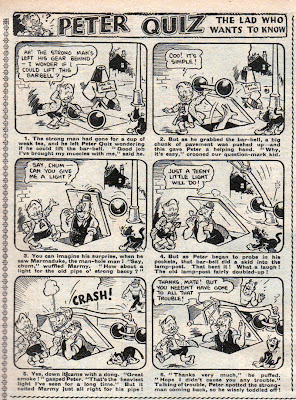 Advertisements didn't feature too heavily in these 8 page comics thankfully but this issue carried a quarter page advert pointing out the nutritional value of Mars bars! (Different varieties then too, with vanilla in some and nuts in others - in those pre-Marathon/Snickers days.) Sadly it's unlikely you'll see ads for chocolate in today's comics due to tighter guidelines on advertising to children. 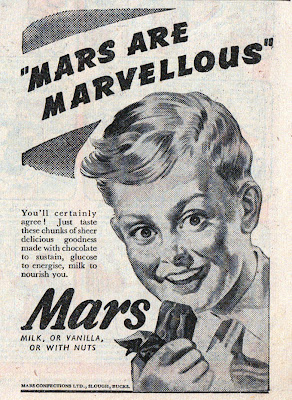 The usual lively back page of Chips was an excellent way to end the comic until the following issue. Casey Court this time made light of fox hunting whilst the Alfie the Air Tramp strip by John Jukes saw Alfie meet celebrity Ginger Podgers. (Why use real star Ginger Rodgers when you can get an extra laugh by spoofing her name?) 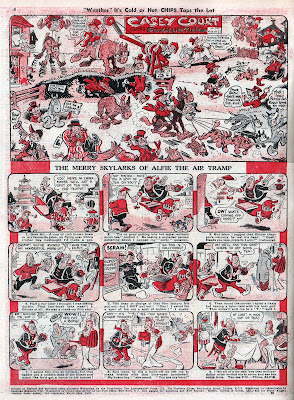 It's funny how smoking was accepted in comics back then - whereas its unthinkable today!

I saw somebody in a topper annual lighting their pipe using a magnifying glass and the sun!

Yes, smoking was very commonplace in comics even into the 1960s. Then the anti-smoking strips started to appear:

I'm kinda in two minds about Smoking in kids (or youth, I should say) comics. While i'm a non-smoker and i know and believe in both the harm of first party smoking and third party smoking, I don't believe you should just ban smoking in comics out right, but at the same time, you shouldn't encourage it really. Giving someone that facts is good, trying to do it without being bias is tricky. Maybe having someone smoking in one strip, and having an anti-smoking strip in the same comic, Or a brief note or something.. i'm not sure.. it's tricky i think..

Oddly some of the older story papers were quite anti-smoking. Though thier text format was better suited to "sermonising" than wasting a panel of a picture strip with a character spouting health advice would be.
The Boys' Friend editor's page in 1903/4 regularly told readers that they ought to give up smoking, or published letters from readers who say that, having smoked too much, their "nerve had gone". The League of Boy Friends also had "to refrain from smoking until 21 years of age" as one of it's rules.
Later in 1911 the Boys Realm Sports Library features snobby boys at a school "sitting around smoking pipes and considering themselves quite too big for the likes of us". They are later lectured by a teacher who tells them it will "ruin their wind".