This week, Egmont UK's Toxic comic-magazine reaches its landmark 200th issue. This would be an impressive achievement for any publication in the history of comics but particularly so in recent years when many comics have stumbled before they've even made half that number.

Launched in 2002, Toxic was squarely aimed at the juvenile market of 7 to 11 year old boys. Often a tricky demographic to win over these days, but with its combination of "gross humour" comic strips and breezy topical features on the latest movies, games, and sport, Toxic became a success. It spawned imitators and even influenced DC Thomson to rebrand The Dandy as Dandy Xtreme for a while but Toxic still remains the top selling comic-mag of its type. (Latest sales figures saw a climb from 40,503 of Jan-June 2011 to 41,521 for July-December 2011.)

Issue 200 is actually fairly quiet on the celebrations (perhaps holding out for the mag's 10th anniversary in September) but I've produced a Team Toxic story that sees the vilest villains of the past 200 issues team up to try and beat the heroes.

Team Toxic has been running in every issue since No.1, and I've written every episode (and I've also been drawing it since issue 15). However I'd like to give a big thanks to the Team's original artist John Rushby who designed the five Team Toxic characters, and also to Lorna Miller who coloured the strip for many issues until a few years ago.

These days every other issue features a Team Toxic classic reprint in order to accommodate new strips such as Russ Carvell's Luke's Spooks and Captain Gross. Issue 200 features all-new material though, including a two page Captain Gross strip. 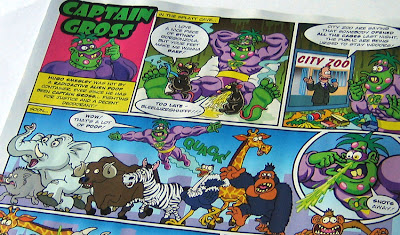 Another new recent addition is the I-Spy double page spread, which I draw; a large busy image for readers to seek out various characters. Watch out for one of those in issue 201. Speaking of which I'd better get cracking on the next one! 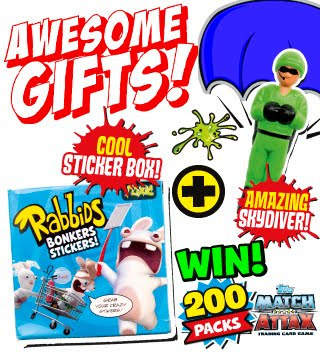 Wow, what a milestone! Toxic are certainly doing something right!!

I must admit, I didn't think it'd run for this long when I started on it back in 2002. I expected it to last five years at most as the market wasn't looking healthy. Very pleased that it has thrived though as it helps to pay the mortgage. :-)

Toxic isn't the kinda mag aimed and me so i've never taken much of an interest but its good it see it doing well.. But something i've been wondering about.. What is the Orgin behind the creation of Team Toxic? It's just, I know you have written them all, and John Rushby was the original artist/designer, but you have things like the Editor (I don't know if he is still going) Matt Yeo who claims (or has claimed) he co-created them with John Rushby, which might be true, he also comments on them running as two page strips since issue 5 as if they didn't appear in issue 1.. I don't think anyone is lying, persay, but i would be interested in knowing that origin behind them and there creation.

No one is lying. Matt Yeo, Toxic's first editor, created the five Team Toxic members and John Rushby designed them. (I came up with the name 'Bog' for the smelly one and created all the villains.)

For the first few issues, Team Toxic was a mini-strip that ran across the bottom of four pages. Then it swiftly became a two pager.

^_^ like i said, i didn't think anyone was lying, but not telling the full story. Even though most origins are pretty dull and simple, i fine them pretty interesting ^_^