The Dandy - History in the making 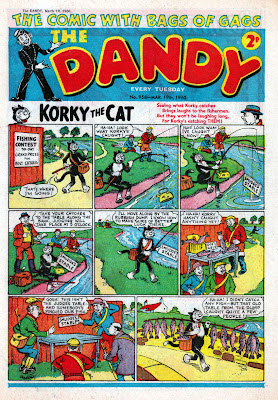 Waverley Books have officially announced on Twitter that this summer they will be publishing a book to celebrate the 75th anniversary of The Dandy.

The Art and History of The Dandy will be published in August, showcasing pages from the comic from 1937 to the present day. Waverley Books also published The History of The Beano a few years ago, written by Morris Heggie. It's thought that Morris, who had a lengthy run as editor of The Dandy himself, will also be authoring this one and will once again be digging through the DC Thomson archive to bring long-unseen artwork to the readers.

More news on this exciting project as it develops but for now here's a couple of classic pages from my own Dandy archive, - a Korky the Cat cover by his original artist James Crichton and a Desperate Dan page by DC Thomson's greatest, Dudley Watkins. Both pages are from issue No. 956, dated March 19th 1960. 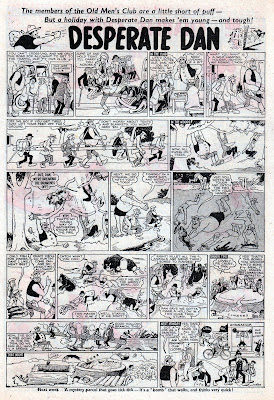 Thanks for confirming that George.

Yes, I think lots of people will be looking forward to this book. Roll on August!

This will be a 'must buy': I have started collecting 60s Dandys----they are fantastic examples of the period.

Yes, there's some excellent work in those 1960s Dandys from all contributors. My favourite era for the comic.

Just love that Korky and Dan..
The old folks learning the Dan way was very funny..a good smoke is very important for health:))

I'm so over the moon its happening..what a relief..and with The Dandy still going and funny..would this book had happened if The Dandy wasn't still going? Thankfully we'll never need to know..if only Buster was still going it might have resulted in some fine books like this as well..
Peter Gray

I doubt such a book would exist if it wasn't for the comic's 75th anniversary so even the critics should be grateful that The Dandy is still going.

Yes, it was a great disappointment that Buster was canceled just a few months short of its 40th anniversary. I doubt there would have been a celebratory book even if it hadn't though, as Buster simply wasn't as widely known by the public as Beano and Dandy.

Latest info on the Dandy 75th book is that it will be "less heavy" than the Beano one, so presumably that means a smaller format.