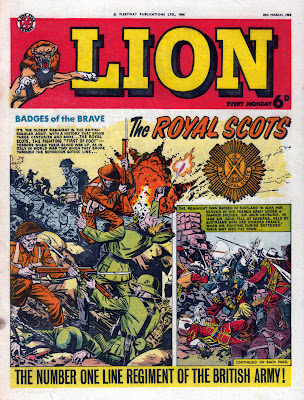 The issue of Lion that was on sale this week in 1964 is a good example of the high quality of the comic back then. Arguably the early to mid 1960s was Lion's best period, with some of the top comic artists in the UK regularly contributing to the weekly.

The eye-catching cover by Joe Colquhoun sets the scene. Tough, dynamic action with a meticulous amount of detail. The strip continued on the back page in black and white, for in those days Lion only had the front cover in colour. Here, Colquhoun draws scenes of World War 1 several years before he'd return to the subject with Charley's War. 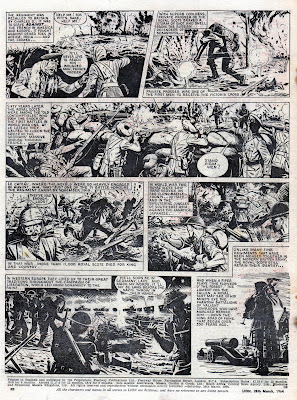 This period in Lion's history saw the comic bring two interesting tweaks to the usual look of British adventure comic. For one, the serials were given individual titles, so Karl the Viking was headed The Voyage of the Sea Raiders for example. Secondly, the large opening panel was rendered in a grey wash, giving it more of a realistic photographic effect. (Sadly this didn't always reproduce well on newsprint.) Stunning artwork here from Don Lawrence... 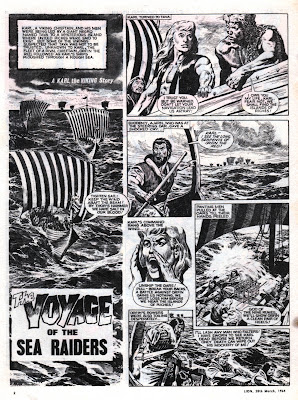 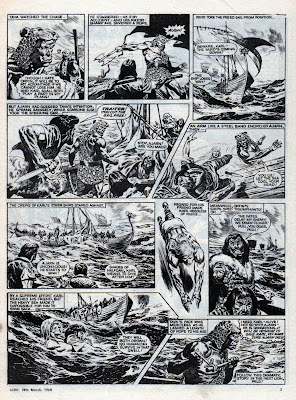 Britain in Chains, drawn by Geoff Campion, was a relatively new addition to Lion at this time, but the series character Vic Gunn would continue his fight against the tyrant occupying Britain in several sequels such as The Battle for Liverpool and Rebel Island. The series was later reprinted in Smash! as The Battle of Britain. 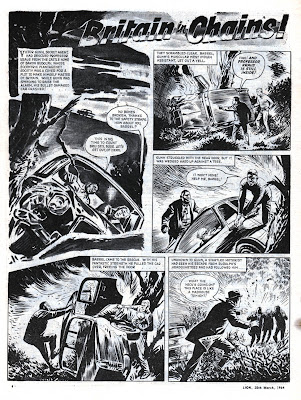 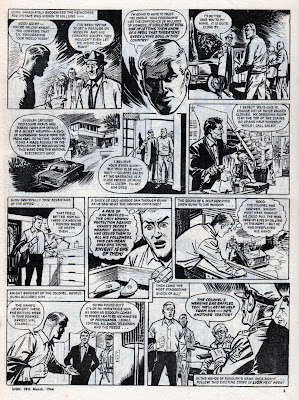 Robot Archie had debuted in the first issue of Lion in 1952 (as The Jungle Robot) and had been a regular in the comic since 1957. The Curse of Dragon Island (drawn by series regular Ted Kearon) still has Archie as a silent robot, before he developed a boastful personality in the slightly lighter stories that came later. 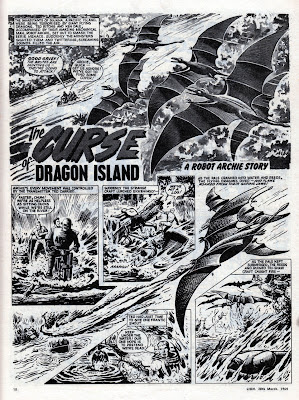 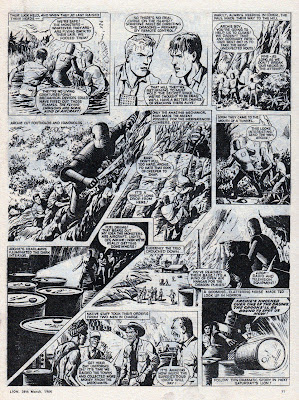 The great thing about the Fleetway comics is that they understood how to pace a comic. Page after page of adventure strips can make a comic look duller than it actually is so Lion added a few features and humour strips to break things up. Its most notable humour strip being Mowser, drawn by Reg Parlett, which ran for ten years. The strip had only been running a few weeks when this example was published and Mowser's relocation to Crummy Castle and meeting his nemesis James the Butler was yet to happen... 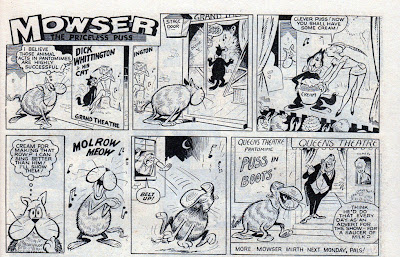 The other humour strip in Lion at this time was Spy Smasher Smith, latching onto the spy craze of the 1960s... 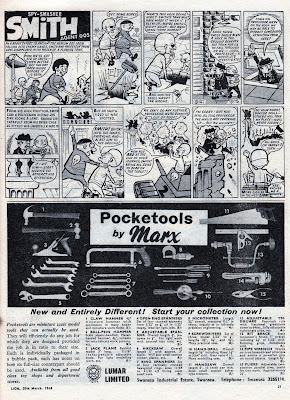 The anti-smoking campaign was starting to get underway back then and comics often featured advertisements to discourage young readers from smoking. (See here for an old blog post I did on the subject.) Here's an ad that featured in Lion this week in 1964... 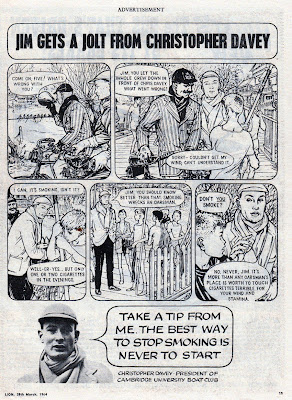 It may have only had 28 pages but Lion of 1964 packed a lot in and was a strong rival to the DC Thomson adventure papers such as Victor and Hornet.

"We're fine, thanks to the safety straps!" must be an early effort at encouraging kids to belt up, too!

As usual seeing pages like these just makes me wish there was a collected edition of some of these strips.

Yes, apart from a handful of strips, nothing's been collected. It looked promising when Titan published one volume each of The Steel Claw and The Spider (titled King of Crooks) a few years ago (and their Albion collection) but there's been nothing since. Presumably sales were not high enough. Problem is, as time goes on the potential market for older material diminishes. I doubt we'll ever see collections of the old Amalgamated Press comics now. Our comics heritage, lost forever.

Depends what source material they have and if they think there's a big enough market, but it'd be good to see some 1960s material back in print. I didn't read Lion until 1969 and only have a handful of issues before then so it'd be nice to see what I'd missed.

For some reason Britain in Chains popped into my mind today which led me here. At the time as an 8 year old the idea of Britain reverting back to feudal dictatorship seemed frightening but far fetched. Not so sure now!

One feature of the story always stocks in my mind. Vic Gunn had a black sidekick called Barrel. Was he the first recurring black character in a Brit comic?

Mind you, their living arrangements might raise eyebrows nowadays. The innocence of youth and a lovely trip down memory lane.

No, there were others before then (such as Dick Turpin's sidekick in the picture libraries) but sadly more caricatured.

I suspect that's why it always stuck in my mind as Barrel wasn't.

I was a Lion reader throughout this period. My teacher took my copy, announced to the class that it wasn't suitable reading, and promptly tore it up in front of them as to what would happen if she saw another comic.

Of course I bought another copy next week.

Teachers like that were idiots. Sounds like they'd believed the anti-comics paranoia of the decade before. Fortunately my teachers in the 1960s/70s were perfectly fine with comics.