ThunderCats return in a brand new British comic this week 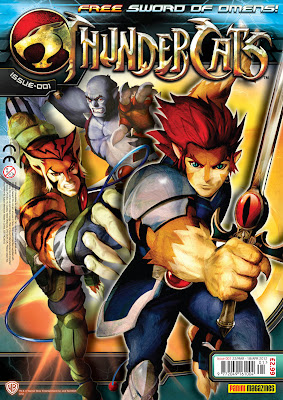 Who says mainstream British comics are dead? The last few months have already seen the launch of Strip Magazine and The Phoenix, and now this Thursday (March 22nd) another all-new UK comic makes its debut with ThunderCats No.1.

Published by Panini UK, the 36 page ThunderCats Magazine will be published every four weeks and is based on the new series of ThunderCats animated adventures currently being shown on Channel 5 and Cartoon Network. The original ThunderCats TV series aired in 1987 and fast became a pop-culture phenomenon, spawning a regular comic from Marvel UK along the way. Fans of that comic will no doubt be pleased to see its return. The new ThunderCats Magazine is aimed at 7 to 12 year old boys (although I'll bet some girls will enjoy it just as much) and will feature brand new comic strip expanding on the ThunderCats universe along with fact files, puzzles, activities, competitions and puzzle pages. 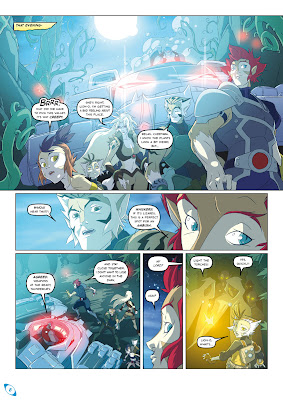 As you can see from the samples that editor Simon Frith kindly supplied, the standard of the comic strip is very high, with scripts by Ferg Handley, artwork by Cosmo White, and colours by Kat Nicholson. This is definitely looking like a quality production. 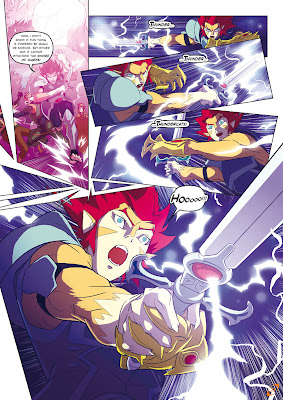 There's also a one-page action figure photo-strip in the first issue, which I'm sure will go down well with younger readers and inspire them to make up adventures with their own action figures. A nice idea, and well executed. 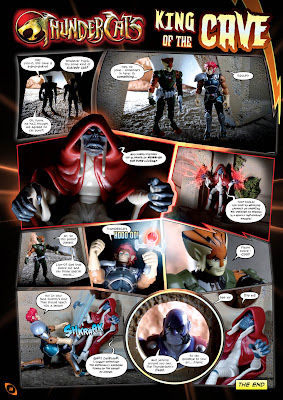 When the new ThunderCats cartoon show first aired in the UK on Cartoon Network it was viewed 157,000 times, and its screening on Channel 5 on December 18th gained it 197,000 viewers. There's clearly a potentially large market for this new comic so let's hope it does well.

ThunderCats Magazine No.1 will be on sale Thursday March 22nd priced £2.99, available at all major retail outlets across the UK. Every issue will carry a gift, with the first one being a Sword of Omens. Here's the polybagged comic and gift below to look out for in the shops: 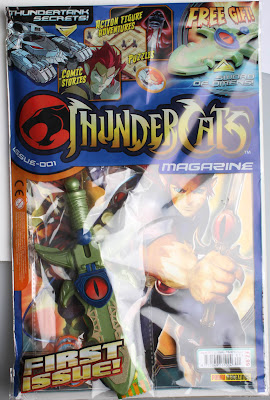 Will include puzzles and fact files as well? I admire your tenacity Lew but if it isn't 100% comics (excluding ad pages) it can't be called a comic.

The comics that defined the medium (Comic Cuts, Chips, Funny Wonder etc) only had 50% strip content, and the legendary Eagle wasn't 100% comics either. As they qualify as comics I'm sure ThunderCats does as well.

I studied Graphic Design with Cosmo, and recently bought his Blue Spear comic after he told me it was published by ComX. Well worth tracking down. He's a phenomenal British talent, I reckon. I hope the exposure that Thundercats gives him will ensure more people see his work. A shoo-in for Dredd, surely!

I'm not sure if I've seen his work before but I'm impressed by these ThunderCats pages. I'll be rushing 'round to Mr.Newsagent in the morning clutching my £2.99 to buy a copy.

A small detail I notice, not that it takes away enjoyment from the comic but the thing is, the writer apparently mistook Wilykit for Wilykat.

The comic strip content appears to have been dropped.
http://comicsuk.co.uk/forum/viewtopic.php?f=1&t=278&start=2160

That's a shame. Last I noticed they'd halved the strip content to run one story across two issues so this must be due to another budget cut. Comics are having a tough time out there, folks. :(