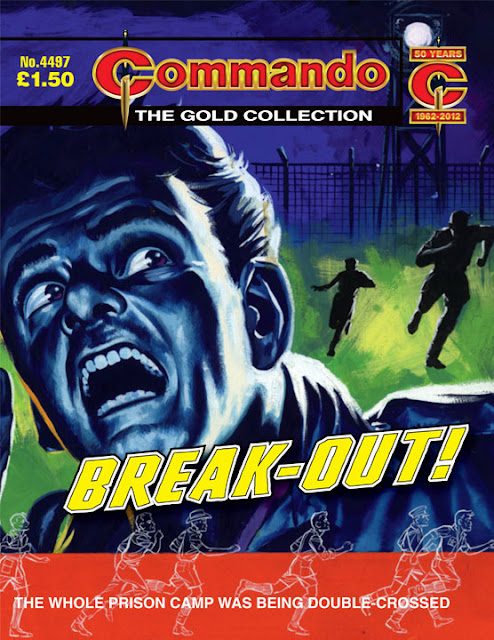 The latest info from Commando editor Calum Laird on the four issues that will be in shops this Thursday which includes the return of the Convict Commandos by Alan Hebden and Manuel Benet in issue 4495 and a classic cover by Ken Barr (above) for the 1962 reprint Break-Out in issue 4497... 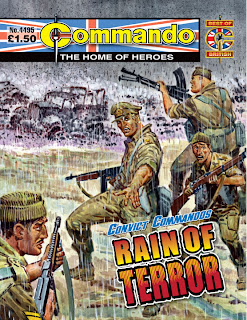 In action once again, the Convict Commandos — Jelly Jakes, Titch Mooney, Smiler Dawson and Guy Tenby — undertake their most dangerous mission yet.
As if ruthless Nazis and silent stranglers weren’t hazardous enough, even the skies are loaded with death…and it’s raining down on them!

In 1956 the Russians invaded neighbouring Hungary to quell a popular uprising. The newly-operational T54 tank — successor to the wartime T34 — was used by them to devastating effect in the campaign.
When British Intelligence learned that Hungarian rebels had captured a fully operational T54, a team were sent to recover the mighty machine’s design secrets.
But with Hungarian government troops and the Russian Army on their trail, this mission was going to be no walk in the park! 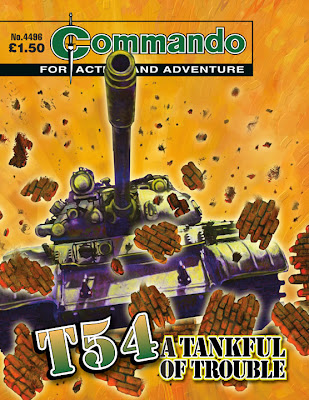 Night after night the tunnel leading from the German prison camp grew longer. Day by day the hope of escape increased.
Then came THE NIGHT…and only one prisoner knew that German fingers were ready to press machine gun triggers; that cold Nazi eyes peered through the gun sights…WAITING.

This is well-crafted tale and no mistake. Sort of “Ice Cold In Alex” meets “The Great Escape” to use a film comparison. The author manages to make what could be a tedious trek across the desert riveting by introducing a…well, let’s just say a wild card to stop spoiling it. It’s skilfully done and works really well.
The cover is a magnificent piece of work — you could almost see it as a film poster, too. There’s menace and fear in that face rendered in blues and blacks.
The inside art holds up its end well, lots of dark half-shadows matching the tension of the tale and plenty of movement when the action gets going.
Well worth another airing 50 years on. 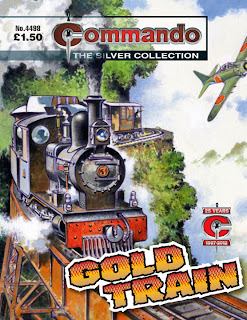 With the Japanese war machine making swift advances through Java every day, it was vital that the country’s gold reserves were moved to safety. Captain Jan Ruiter was assigned this task. All he had to do was escort a train carrying the gold to the coast. An easy enough job, you might think. But not when the troops under your command are a bunch of rookies and a group of battle-hardened Japanese veterans are hot on your trail!

Every Commando story needs a good hero — so more than one must be even better. A mix of characters — and the ensuing conflict as they clash — is essential. Writer Alan Hebden is a master of making memorable characters. At first glance, the hero of Gold Train is Captain Jan Ruiter, tasked with transporting gold reserves to safety. However, for me, Aussie train driver Hogey Dubbs — and even his clanking, trusty steam engine “Esmeralda” is like a character — steals the show. Now let’s find out if they can stop the villains from stealing their gold!