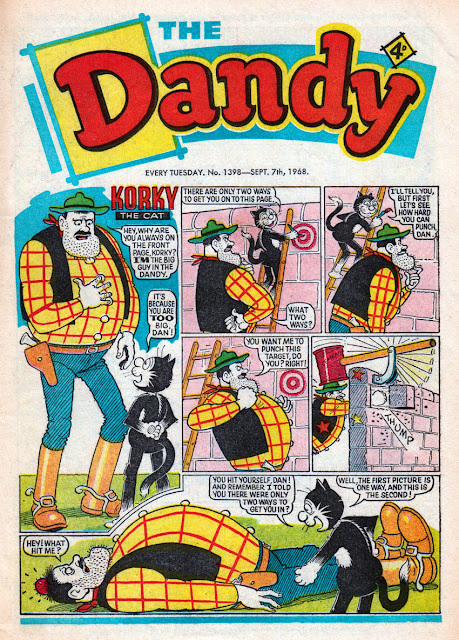 Desperate Dan was always one of The Dandy's top strips, right from his debut in issue No.1 back in 1937. How could it not be, with fantastic artwork by Dudley D. Watkins?  However, editors chose not to make him the cover star until 1984! My guess is that perhaps they felt that Korky the Cat was a more appropriate opener, with its simplicity and slapstick. I loved both strips as a child but for me Korky was the ideal cover strip.

So, Dan was kept off the cover for almost 50 years. Well, not quite. Here's an example above from The Dandy No.1398 (September 7th 1968) which actually addresses the situation with Dan wanting to know why he's not the cover star. Artwork by regular Korky artist Charlie Grigg who would also become the artist on Desperate Dan in the annuals and specials after Dudley Watkins' untimely death a year later.

Dan also guest starred on the cover of The Dandy No.1663 (October 6th 1973) in the Korky the Cat strip promoting that week's free gift.

The idea was repeated nine years later on the cover of The Dandy No.2105 (March 27th 1982). The concussed cat could also be considered as Dan getting his own back on Korky for the prank the moggy pulled on him in 1968!

A year later and Desperate Dan takes up residence beside the new Dandy logo for The Dandy No.2149 (January 29th 1983). A waxwork of Dan also appears in the Korky strip, along with figures of other Dandy characters. Korky's star was falling... 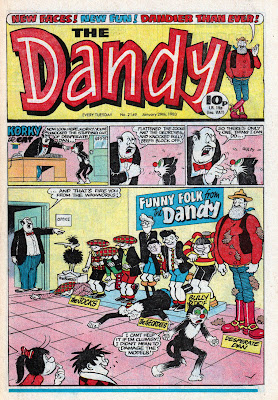 That same issue saw the beginning of all-new Desperate Dan strips running across the centre pages. Previous to this Dan had been a single page black and white strip, and reprints of Dudley Watkins' classics had been running since 1969, with occasional new ones by Charlie Grigg. But Charlie was about to retire from regular comics work so for the new colour series came a new artist on the strip, - Ken H. Harrison - and a shift towards Dan's personality becoming more childlike... 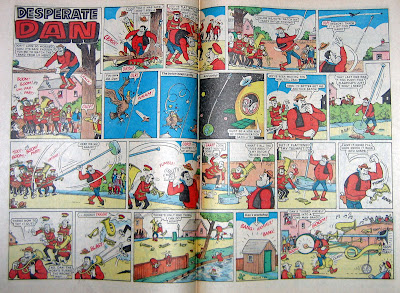 Finally, with The Dandy No.2243 (November 17th 1984) Desperate Dan was established as the new cover strip, elbowing Korky the Cat into the interior pages, although Korky gained a place by the masthead with a vignette drawn by Charlie Grigg. (Korky's first interior strips, now drawn by David Gudgeon, were obviously originally intended for the covers as a large Korky logo and house ad took up the space where the cover masthead would have been.) 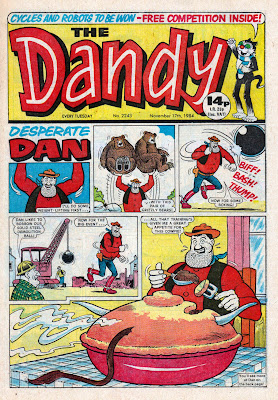 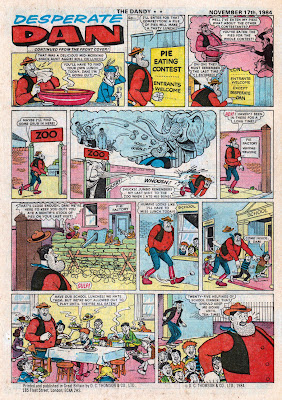 Desperate Dan appeared as the cover story for over ten years, eventually being replaced by Cuddles & Dimples, Jak and various others, but he still makes an appearance on covers at times, now drawn by Jamie Smart. You can't keep a good Dan down. Besides, who's going to argue with him?
Posted by Lew Stringer at 15:27

Some happy memories from the 80's for me..

I like The past Dandys even more now as an adult..always a Beano fan..my sister got The Dandy and I used to read hers..until she got into Hi! magazine!!

very interesting read.
I really miss the days when the cover had a strip on it.. it's like when the 'American' comics decided no more speech balloons.. and today.. where most covers are just posters.. often with little or no direct reference to the inside.. atlest British comics aren't quite that bad yet..

anyway, I felt covers gave you a good look at what the comic inside is like. They often say never judge a book from it's cover.. despite that fact that the cover (which includes the back cover) gives you a pretty good idea of who the writer is and what the story is about..

Simon, Thanks for the info on that 1952 issue. I didn't know about that. There were probably other appearances of Dan on the cover before his strip took pride of place but the featured ones are the only ones I have. British comics have long featured a shared universe of characters.

Manic, yes I always liked strips on the cover too. I felt it attracted more attention than a single image. The longer a person looks at a cover, the more likely they are to buy it, so if someone starts reading the cover strip in a shop it's possible they may buy the comic. At least that used to be the theory, but there's a good case for powerful single images as well.

I remember Dan being on the cover in the early 70's eating popping candy which sparked out of his ears with Korky..
Dan came on the covers for free gift issues sometimes..

Of course, Dan has even invaded the BEANO cover too! There's one Dennis strip where Dan sleepwalks "all the way from America and the Dandy", resulting in Dennis's Dad facing a repair bill that for once, wasn't due to Dennis's menacing, but because of a Dan shaped hole in the wall of the house!

Lew , I think you've opened up a can of Dans here! Or maybe even created a monster , and a fine Dandy one at that :-) Okay , I'm done LOL!

P.S. Seriously though , that's the great thing about research sometimes. Just when you think you've got it covered , along comes more interesting tit-bits to add to it.

Yes, it's interesting that Thomson's obviously knew Dan was a strong contender for the cover position for years. I still think Korky was the best choice for his time though.

It's also interesting that Dan had a slight personality change, into a more naive, childlike character, before he was promoted to the cover. Perhaps Thomsons felt the slightly harder, more aggressive Dan of 1937 to 1983 wasn't suitable as a cover star?

Not forgetting that after he was replaced by Cuddles & Dimples, he eventually made his way back there (with a story that had Cuddles & Dimples being kidnapped by ninjas and taken back inside the comic!).

As I said, Dan was on the cover for over ten years. Probably closer to 15 or more, without checking.

Dan appeared on the Beano cover before he ever did the Dandy. It was Beano #390. I,m not sure whether it was just him on the front or him and other characters?