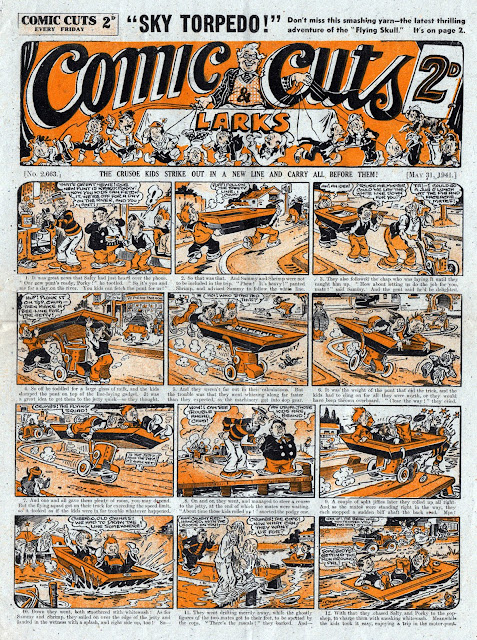 Wartime cutbacks were taking hold and had already caused the end of Larks comic, which had merged into Comic Cuts in 1940. The price of the comic had also risen. No longer the penny comics of the 1930s, Comic Cuts now cost 2d for just 8 tabloid pages.

The cover stars are The Crusoe Kids and this example is a smashing piece of work by Cyril Price. A slick inking style and lots of background detail pull the reader into the story, - and is 'The Pig and Faceache' one of the funniest names for a pub or what? This is top quality work printed on very cheap paper but it has been preserved by some careful owners over the years so is still immaculate. As for the bits of wood chip and greyness of the paper, - that's how it is. The paper is actually as grey as cardboard, but the orange spot colour livens it up considerably.


Inside, one of the various strips across the centre pages was Waddles the Waiter. This strip's first series ran from 1912 to 1925, drawn by Alexander Akerbladh. Later, the editor obviously thought it still had legs so it was revived from 1938 to 1947 by Terry Wakefield.

Here's a typical wartime strip which sees Plum and Duff resourcefully deal with the enemy, in this case, Italian soldiers. Sadly, a sign of the times mean it's any excuse to use offensive nicknames for foreigners. Artwork by Albert Pease. 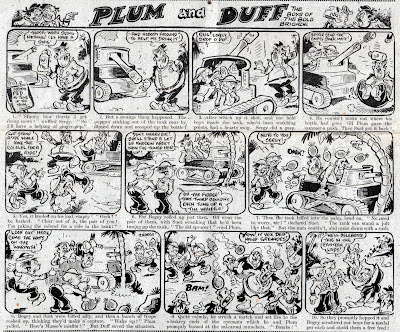 The League of Ovaltineys was the wartime equivalent of social networking, with kids eager to be a part of it. No video games to partake in back then though of course but instructions on how to make a paper plane would still provide entertainment...

On the back page, Pinhead and Pete drawn by Bertie Brown. Again, there's some racist language used casually here, but Pinhead (the big white guy) and Pete (the little black chap) are clearly good friends and equals, which hopefully was the message that filtered through to readers. 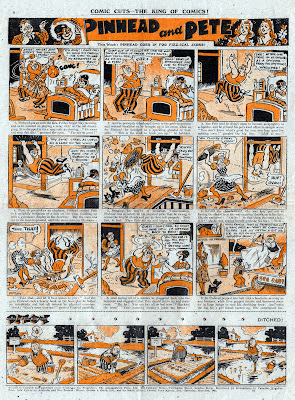 The somewhat surreal strip at the foot of the page, Dizzy, was another fine Cyril Price job. All in all, a great issue with some of Britain's top humour comic artists of the era.

One thing i would disagree with these days is when the one artist said that today, art has to be SOO detailed because of the quality of the print, and its want everyone wants, that's why comics get delayed. But, like i said, I disagree with that on soo many levels. Here, in 1941, we see High quality artwork. Hell, some of that is much more detailed then comics today, and yet it is printed on cheap war time paper, so it's grey and bitty with only 2 tone print (Black and Orange). Great work by artists and creators doing the best, if not better, then that could with the tools at hand. This is one reason I'm a old time gamer.. People pushing the sky on what could be done. Okay, sometimes they fail, but they try. And in todays world of click-click-work-done, people who try should be praised as gods, not insulted by others.

Oh and personally, called Pete a coon isn't really racist. For it to be racist, it should be said and carry insulting meanings. Pinhead is (in that script) shown to be the dumber one of the two, and no hate message is being shown. To put hatred into a word no-matter what, reminds me of the last planet of the Apes film (Battle for the Planet of the Apes) where it's now a major offence for a Human to say 'No' to an ape, no matter what, YET apes can say it to apes, and apes can say it to humans.. And that's called `equal rights`.. yeah.. special treatment for one race is equal... ¬_¬;

I have pretty much no 40's comics so thanks for posting that.

Blogs are the only way I can read these titles so that's why I've voted for the 40's! :)

Interestingly , I'm developing a love for 1920s and 1930s papers , especially seeing as they were the birthplace of many '60s and '70s characters ( now in their picture incarnation of course ). 1950s I can take or leave though ( oops! ). Definitely an era that deserves better coverage before its all forgotten and the paper on which they were printed crumbles into dust,

hi lew,
did you say only 8 pages?
looking at those pages - it would take as long to read 1 panel as to read an entire page of a typical dandy strip today...

Yes, the 8 page (approx 380mm high x 280mm wide) format was the standard for most comics throughout the early 20th Century. Some had 12 pages. Comics in a smaller format such as Film Fun, Kinema Comic, Knockout, Radio Fun (which, like Dandy and Beano were approximately A4) had more pages.

That's what I like about things such as The Boys' Friend (or, today, Shonen Jump), it's a weekly comic that can entertain you for a significant part of the week! (Mind you, I say this as somebody with a full time job. The intended audience could probably occupy only half an afternoon with it!)

I was suprised to find this copy of comic cuts on the net. I have a 1943 copy of Comic cuts in good order.