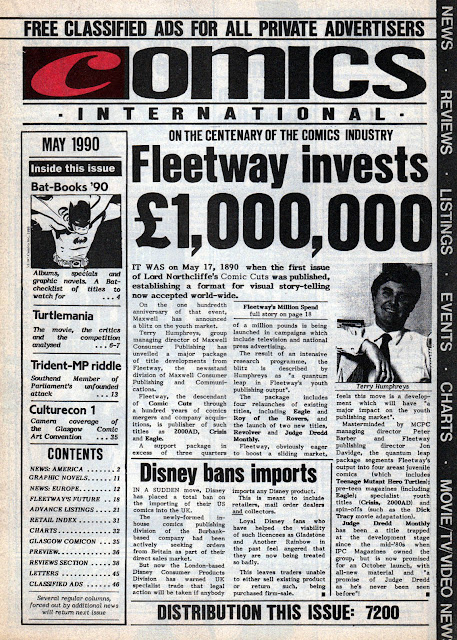 It all seems very optimistic now. A UK publisher investing £1,000,000 to reinvigorate its line of comics. However that was the situation in May 1990 when this issue of Dez Skinn's Comics International revealed Fleetway's big plans. 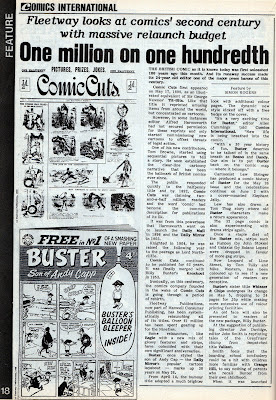 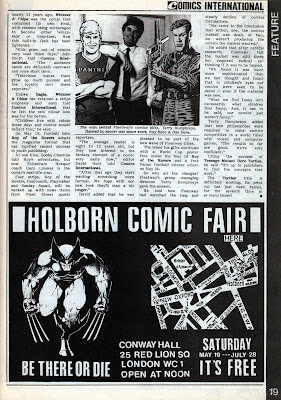 Fleetway were taking a risk back then, as sales of comics had been sliding for some time. Rather than abandoning comics, they decided to try and reinvigorate what they had and launch a couple of new titles. Ah, how the comics industry was buzzing over the publication of Revolver and the new Judge Dredd Monthly (or the much-better titled Judge Dredd Megazine as it was renamed before its launch).

What high hopes we had for the 30th anniversary of Buster, which editor Allen Cummings said "deserves to be talked of in the same breath as Beano and Dandy". Little did we know then that Buster would be axed just under ten years later, and that the new publishers would focus more on children's magazines than comics.

Here then is the news of 22 years ago, when it seemed that British comics were on the verge of a renaissance. Noble thoughts, but of all of the Fleetway titles mentioned in the article, only Judge Dredd Megazine is still running (now published by Rebellion). 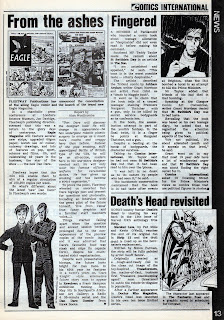 For those critics who think that the drop off of comic sales are a recent problem (and that modern content is to blame) it's worth considering the words of Fleetway's group managing director Terry Humphreys in 1990 when he spoke of falling sales being a "long and steady decline". The million pound investment back then was their way of trying to fight the increasing disinterest in comics, and today publishers try other ways and other investments to try and turn the tide. In some ways it may be seen as fighting a losing battle that's been waged for decades, but hopefully publishers will continue to fight and keep British comics alive.

PS: It's a good article by Simon Rogers but the bit about Tom Browne introducing comic strip narrative to the UK is quite an exaggeration. Browne was brilliant, and his style was (and still is) massively influential to British comics, but he didn't invent the comic strip.
Posted by Lew Stringer at 18:02

...and all produced on an electric typewriter with Letraset headings. Ah, the kids of today don't know how lucky they are!

And it still looked great, Dez. Perhaps it's just me but I think there's something more organic (for want of a better word) and more readable about pages produced like that. Modern mags designed with Quark, In Design or whatever can seem a bit, I dunno, soulless or sterile sometimes.

Not wanting to tread on too many toes here , but the advent of modern technology has taken quite a bit away from the old school artistry. One can instantly see whether someting has been hand drawn or computer assisted. Organic is infintely more pleasing as it more closely replicates the real world than any unnatural method. I am drawn to the famous late 70s vogue in pixellated art ( dots and blocks ) , where you had to stand back to focus on the subject. The human brain will inevitably fill in the blanks ; but still the old way was more earthy. And hence more pleasing to the eye than most modern efforts and ultimately more " real " .

I must admit I prefer *colouring* by computer far more than physically using a brush and bottles of ink. However where lettering is concerned I like to hand letter if possible, particularly on sound effects. If I'm lettering an effect I "hear" the sound in my head and try to convey that with the design. Using a display font comes close, but it's someone else's energy that's gone into conveying the feel of it. If that makes sense.

I remember CI, I was even a bit of an Elvis writer for a while, but the moment it was shipped to the states it grew senile and buried itself up the American way. I remember it was pathetically behind the times, especially as the web was wupping it to the by line, it slashed its letters pages in half, ditched most of it's columns, increased the font size so there was less actual content and fifty percent of it was adverts.

Started out good, ended up a sad effort.

Hmm, it mentions Whizzer and Chips getting a revamp in May 5 1990... obviously didn't work, since it merged with Buster later the same year.

Well, in the case of Whizzer & Chips it wasn't so much a revamp as a considerable cutback to keep it going a little longer. It was already a doomed comic and losing 8 pages (and its dual identity) was just preparing it for the merger with Buster really.

Indeed, the revamp was the last nail in the coffin for Whizzer and Chips. 17 at the time, I remember believing that it was a terrible move - at 35p for 24 pages, it was far more expensive per page than Buster (which was then 40p if my memory serves me correctly), the new logo was rubbish, the loss of Bob Nixon and Tom Patterson to the Beano and Dandy hit W&C particularly badly (apologies to Graham Exton, you may be responsible for many amazing Sweeney Toddler scripts and designs, but your inked artwork was awful to my eyes!), Jimmy Hansen never quite gelled on Mike Lacey's old strips, and the yellow/purple/green pages were colour on the cheap. On top of that, it lost its identity with the end of the rivalry between the two parts of the comic.

That the relaunch only lasted four months suggests that other readers felt the same.

Unfortunately, my view hasn't changed in 22 years! I wonder whether it could have lasted longer with a more conservative revamp - 40p for 32 pages, keep the rivalry (didn't all us Whizz-kids read both sections?) and full colour might have served it better with the 1982 logo.

My feeling was that the "two comics in one" factor had long ceased to be convincing so a change was inevitable. However, destroying the concept and cutting back the pages was no way to win new readers. Truth is though, I'm pretty sure they knew by that stage that it was doomed and beyond salvage so the idea was to merge W&C with itself, then keep it coasting along at a reduced budget ready for its merger into Buster.

I started reading W&C in 1990 after the relaunch - so the relaunched version is my reference point for the comic. Felt like I read it for ages, but it must only have been a few months before it merged into Buster.