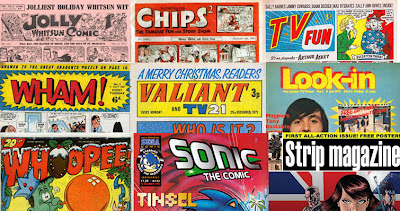 I've added a poll to the right hand side of this blog for you to vote for the era of British comics that you'd like me to cover the most. I've excluded the decades prior to 1930s as I don't have a great deal of material from that time (but what I do have will continue to be featured here from time to time).

Why do you visit this blog? Is it to familiarize yourselves with comics of your childhood, or to learn something new about comics from before your time? Post your comments below and let's discuss it.

Which era would you like to see Blimey! cover the most? Now's your chance to vote! (Poll ends in three weeks time.)
Posted by Lew Stringer at 13:26

I visit the blog to catch up on the new stuff as well as the comics from my childhood. Being not that well off at the time we, my sister and I, were only able to get one comic each per week for a long time and so missed out on a lot of titles (made up for it now though)so reading about what was available then is always interesting. I also like the way its written and always go to your blog first and use the links to catch up on the other stuff. All the best.

I like looking at stuff from various eras - and there's definitely something appealing about seeing comics from before my time.

I'm not sure what polls like this really accomplish. Most people are bound to vote for the period they grew up and the last thing we need is yet another blog that centres on comics post 1970. I voted 1940s because no one else is covering the golden age of British comics like you do. Please let's not lose that at the expense of turning blimey into another blog that only looks at 1970s and 1980s comics. Keep blimey unique!!

I visit for news on new english comics, especially like the commando rundowns, it's another three months before these issues get to australia!

also like reading about 70s and 80s english comics that I grew up with in NZ and the 50's and 60's which i got to experience with the odd tattered second hand issue here and there.

pretty much everything you cover is interesting!

Anon, thanks for your comment. Don't worry, - I'll still be featuring comics from all eras, including the 1940s. I just wanted to see where people's preferences lay, so I could give a better balance for readers. But other decades will still be featured.

Hi Anon , the Cap here.I can't understand your post about Blimey being turned into another blog that ONLY concentrates on 1970s and 1980s comics. A quick search will reveal a myriad of blogs who go outside that era , my own being one example. Sure , we all like the era we grew up in because it is familiar but I would also say that we delight in unearthing tresures from before we were born and also give a nod to new ventures that crop up now and again. So anon , have a look at http://theyellowedpages.blogspot.com/ Sorry Lew , for the unashamed self plug here. But it does prove a point ;-)

hi lew,
the1970s were my era for comics, but i voted 1960s, i think this was the time of great pop culture in movies and tv and music and fashion and writing and british comics reflected that time, when british creativity was at its peak, i think all this atmosphere rubbed off on the comic artists/writers in the 60s, it must have been an amazing period to be writing or drawing comics then...

I like all aspects of your blog but I particularly love the 60s and 70s. I get a warm,fuzzy feeling seeing the likes of Smash, Pow!and TV21 on these pages. Being one of 7 siblings, a lot of comics passed through our house so I have strong memories of a great variety of both boy's and girl's comics.Having reached 50 a while back, the nostalgia is stronger than ever.

I also like the Radio Fun-type material as I remember a friend's father had a number of annuals which I borrowed and read many times.

I have not and wil not vote. Not for any thing against the poll or anything, but I personally don't know my own answer. Sure i like to remember comics from when i was growing up and stuff, But i know them. Sure, there are always tons of new things to learn, but i personally would prefer to learn more about what i don't know alot about, or even know nothing about.. So personally, I don't know how to vote and I wouldn't be happy with whatever I vote. Probably one of these 'all of the above' times for me ^_^

Lew, please keep your blog exactly as it is! It's a pleasure never knowing what's going to turn up next, and the best thing for me is that you add to the blog very regularly so there's usually something new to see every time I visit. It would be great to hear more about artists - who they are, their careers, how to recognize their work. Anyway - great stuff!

I haven't voted for the era I grew up in because a) I'm familiar with it already, and have many of my old comics to peruse still, and b) it was the late 70s / early 80s, so I can pick up comics and annuals from that time easily enough in charity shops.

I'm voting 50s, because, although it's widely acknowledged as a pivotal time in Brit comics (Baxendale, Law, Reid, Eagle, Lion, girls' comics, etc), there seem to be precious few actual online examples from that time - hardly any Baxendale, a tiny amount of Reid's Jonah, and, with all due gratitude and appreciation, much of the available images are in the form of low-res, badly processed scans.
Compare that to the situation with the US tradition: just about every Kirby comic and thousands of far less notable comics can be downloaded and studied - it's not surprising that most comics critics judge every artist in terms of 24 page action scenes or by comparison to Herriman, Segar, Stanley, etc, it's a bit like the way Received Pronunciation becomes misconstrued as the "right" way of speaking.

My second pick (if I had one)would be the 1930s because, again, it's an under-represented era, fondly spoken of, that's hard to find out about outside of encyclopedia type books where I see tantalising glimpses of Bertie Brown and the like and just have to take people's word for it what a buzzing time that was for British comics.

Whichever, if any, era you lean toward, I'm sure this will remain one of my favourite comics websites anyway, so I'll be happy as long as you continue with the excellent job you're doing.

Thanks Alec. I don't have a lot of Beano material from the 1950s unfortunately but I have quite a bit of material from AP and other publishers.

The 1930s; again, not much DC Thomson stuff, but some AP material I'll be showing here soon.

I voted for the 1960s era. i imagine not much material exists before that time anymore.
I think in 40 or 50 years time the publications prior to this digital age will fade into obscurity.
I imagine in the future very few will know the genius of leo baxendale and the other pioneers, probably Lew Stringer will have a bigger fan base (no offence) and others who were around in the typewriter and pen & ink days of the 1980s and are still working now in the 21st century.
I am younger than you, but i have seen so few examples of the work of artists prior to 1970s.
The copyright holders dont publish much material from their archives. There are all these old comics in the hands of a few collectors and for legal reasons i presume, they cant publish scans on the internet.
The Americans are proud of the heritage of their comics and so are the Europeans.
I personally only buy the book reprints of certain series from 2000AD. But i do like humour too, but i have not found a current British publication that suits my taste in humour, but there is only a very small pool i can choose from. I hope that does not all sound too pessimistic. But, if there was a regular god quality collection i would buy it, probably to read on my ipad.
Thanks for your blog Lew, i am a regular reader.

I'm actually even more pessimistic. I think the digital age will fade into obscurity too and blogs such as this will vanish when Blogger eventually crashes/goes bust/decides to cut down, so even preserving the stuff online isn't reliable.

There is still quite a bit of pre-1960s stuff out there, and on this very blog. Some comics have been very well preserved and I've purchased comics from the 1930s that are in far better shape than some from the 1970s.

I doubt I'll be remembered more than Leo. He's played a far, far more important role in comics history, and his stuff's top standard. Sadly I think some of his contemporaries will be forgotten, undeservedly of course.

Regarding scans of old strips, publishers are pretty good about a few pages from a comic being shown. It's the bloggers who publish entire comics who they keep their eye on. And of course sites that offer downloads of full comics are being monitored.