A time of change 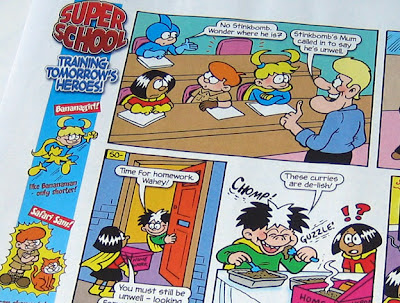 I almost missed this, and it's been out for a month. BeanoMax No.67 features the last Super School for a while as, sadly, the strip is being rested. If you want a copy you only have a short time left to buy it as the next issue will be out on Wednesday. And it's an important week for Beano fans as this Wednesday (8th August) will see both BeanoMax and the weekly Beano undergo a redesign.

For now though, BeanoMax No.67 is still on sale, £3.99, bagged with a couple of gifts (including the bow and arrow set seen in the Dennis strip) and featuring the aforementioned Super School page by me, along with great strips by Nigel Parkinson, Laura Howell, David Sutherland and more. 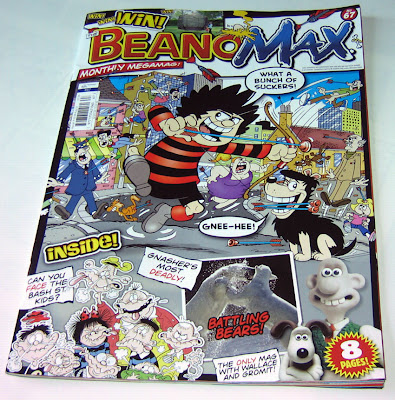 8 pages for four quid that's got to be the worst value comic ever. Its finally happened, you pay for the toys with a comic attached, sad.

It has 44 pages. The "8 pages" blurb on the cover refers to the Wallace & Gromit section.

What are you drawing for the new look Beano Lew?

The bow and arrow was given a while ago in a different colour. One question Lew when Super School started Bananaman was not in the comic how would children know that Bananagirl was a relation of him?

@Gareth, Nothing yet unfortunately. I think they're just going to feature the core Beano characters for now.

@1000MB, I don't think familiarity with Bananaman would matter really. Readers would just see her as a character in her own right. If they were aware of Bananaman as well, that'd be a bonus for them.

@1000MB The Beano always used the tagline "Like Bananaman, only smaller" to describe Bananagirl. When Bananaman did end up joining the Beano (while still also remaining in the Dandy), they confirmed that the characters were cousins.

I wish a story had been done where they actually met though.