The little comic that made history 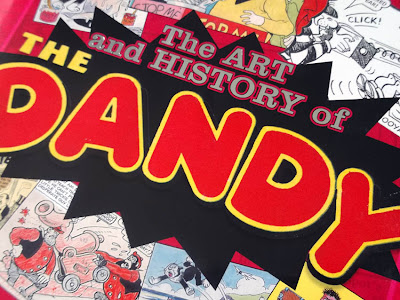 It couldn't have been easy to condense 75 years of a comic's history into 288 pages but Morris Heggie and his co-writers manage it well, with The Art and History of The Dandy being as close to a definitive book on the comic as we're ever likely to see.

The Dandy certainly deserved a book to be written about it. The comic that began way back in 1937 as a challenger to the mighty Amalgamated Press line of comics not only proved more popular than its rivals but eclipsed them all in longevity. The Dandy is now the world's longest running comic. The underdog that became a champion. 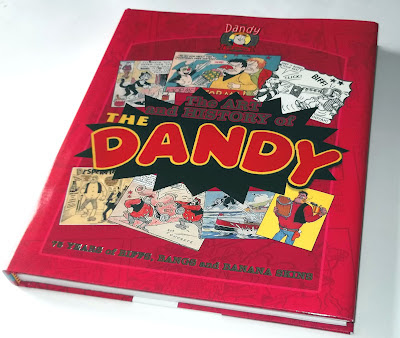 The Art and History of The Dandy isn't as large as the massive History of The Beano that was published four years ago but it still serves as a perfect companion to it. The design is similar to the Beano one, and covers the history of The Dandy from the first issue (reprinted in full) up to a few weeks ago with the debut of my Dark Newt strip and Nigel Auchterlounie's Olympikids. 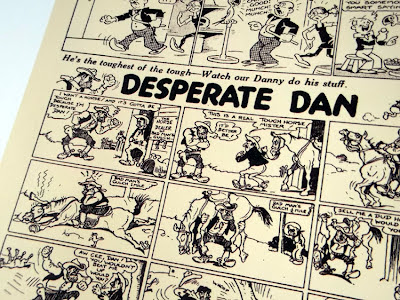 As it's published by Waverley Books, part of the DC Thomson empire, and written by staff members you're not going to get a warts-and-all exposé of the negative aspects of the comic or company. Then again, who'd want that in this book? This is a celebration of a great comic and the emphasis is on the positive. That said, the book still has depth, with the writers using their inside knowledge to reveal background information on artists and stories. (Interesting to read that Winker Watson once rivalled Desperate Dan for popularity and that Steve Bright was the creator of Bananaman.)


Another benefit of it being a book written in-house is that Morris Heggie is also DC Thomson's archivist, so many pages are photographed from the original artwork itself, showing every brush stroke and correction. Fascinating stuff.


The bulk of the book focuses on the golden years of The Dandy prior to the 1970s. Amongst many other things there's a selection of classic Desperate Dan strips from the war years and the 1953 Coronation issue is reprinted complete. 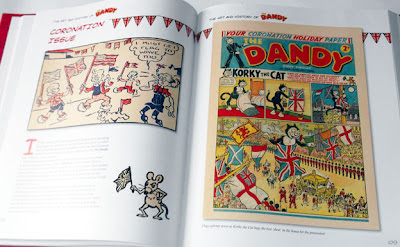 There's also a section on the best Dandy Summer Special covers of the 1960s showing Charlie Grigg's marvellous original cover art complete with visible paste up lines on the logos. 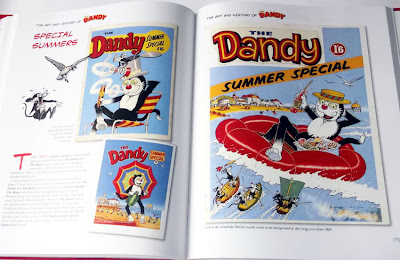 Sadly the 1970s are quite poorly served, possibly because the comic itself was fairly static during this period and in need of a boost due to falling sales. (A ledger from 1950 shows The Dandy's sales then to be a staggering two million copies a week!) When long-needed changes did come to the comic in the 1980s it changed it considerably. Perhaps it wasn't so evident then, but looking at the issues in a historical context they become brighter and more open in style. The comic has continued to evolve ever since. 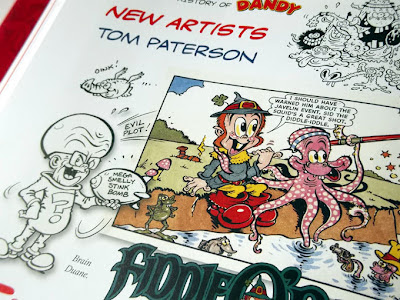 I couldn't help wondering if the change in 2007 to Dandy Xtreme is now considered a mistake that the company wish to play down. Focus on the Xtreme issues is just one page, barely a mention, before the book moves on to cover the most recent revamp in the final chapter.


The back of the book contains an index of stories and the issues they appeared in, taken from Ray Moore's Dandy Index. Unfortunately the information becomes more limited for the year's following Ray's input, but it still lists the issue dates of the first appearances of post-1986 characters.

Priced at a RRP of just £20, (cheaper if you shop around) this is a fascinating book on the evolution of The Dandy and a fine tribute to the longest running comic.
Posted by Lew Stringer at 02:20

Uh oh. I hope it at least makes it to the anniversary. http://www.bbc.co.uk/news/uk-scotland-tayside-central-19248459

Yes I saw similar today. It might be just scaremongering though? The numbers have been low for a while. http://www.dailymail.co.uk/news/article-2188036/The-Dandy-Britains-oldest-comic-faces-closure-75-years-sales-fall-just-8-000-week.html?ito=feeds-newsxml

Looks great - may end up being a swansong given the recent sad news your other commentators have picke up on...

I honestly don't know what's happening with The Dandy. Thought I did, but now I'm not so sure. I hope that all this publicity can boost its fortunes. SAVE THE DANDY!

Surely its a case of poor sales due to poor and low distribution? None of my local supermarkest and newsagents sell it - I have to subscribe.

Sky News have even had their scottish correspondant reporting from Dundee today and that dimbo newsreader Kay Burley giving her opinion on the art not being as good as when she was a child.

At least Commando still seems to be doing alright, better distribution and good online content seem to be helping it. I might pick up a copy of the Dandy with my Commando's this week

TV news reporters aren't as good as they were when I was a child.