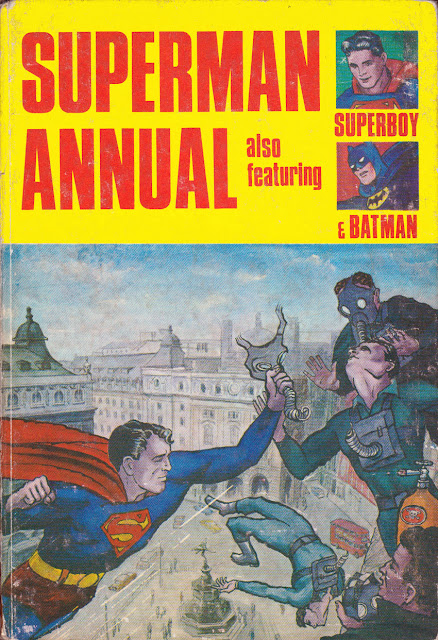 I picked up this Superman Annual in 1968 in a sale of remaindered annuals at the local Co-Op. I was never a big fan of the contemporary Superman of my youth (the mid-1960s to 1970s) but the stories in this book reprinted some late 1950s stories. Now those I did like, and even today it's still the only era of Superman I'm interested in. (Although I have followed the comics on and off for decades.)

The strips inside were all American but in order to appeal to British kids a new cover was commissioned showing Superman tackling some villains in the skies above Piccadilly Circus! The illustration had nothing to do with the stories inside, and I don't know who the uncredited artist was but it's an intriguing piece of art. The villains seem intent on some act of terrorism involving poison gas. We can just about see that the bad guys are perched on a roof. Superman is ripping off their gas masks and seems in no rush to save the life of the one plunging to his doom. Below, is London, going about its business, complete with familiar red bus. How could I resist such a book?

Superman Annual 1968 had 96 pages and was priced 10/6d (52 and a half pence). It was published by Atlas Publishing & Distribution Co. Ltd. of Brixton Road, London. The strips included some real classics, kicking off with The Story of Superman's Life from Superman No.146 (July 1961) which gave new readers (as I was then) a perfect introduction to the character. There then followed Superman's First Exploit (Superman 106, July 1956) drawn by Wayne Boring, my personal favourite Superman artist... 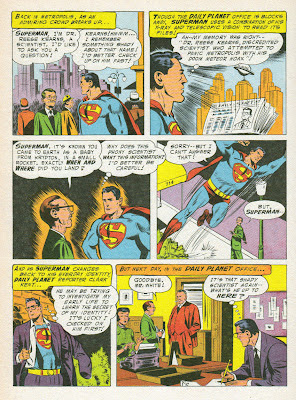 Although the original strips had been in full colour the strips were newly coloured for this annual. Some even appeared in spot colour (green or orange) to save money. I didn't mind this at all, as the artwork was pin-sharp anyway and the superbly written stories pulled the reader in. Here's the splash to Superman In The White House (originally presented in Superman No.122, 1958) by Al Plastino, another favourite... 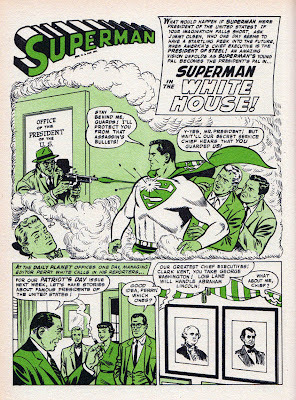 As you saw from the cover, Batman was listed as a co-star and he featured in The Invulnerable Super-Enemy from World's Finest No.158 (June 1966) with art by Curt Swan and George Klein... 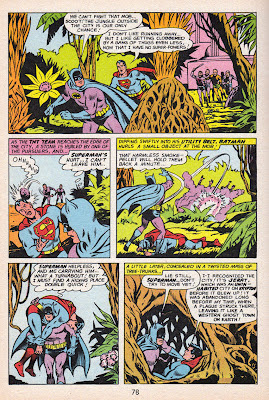 All good stuff from an era of simple but well constructed stories that were clearly illustrated and didn't take themselves seriously. That's the Superman I liked.
Posted by Lew Stringer at 22:11

This book was my first exposure to Superman, I absolutely love this book! The stories and art are top notch and I am really glad this was my first impression of Superman. What a great post to launch an enormous feeling of nostalgia. This book launched a lifelong passion.

Picked this up in the early eighties as a young lad in new zealand, seen dozens of copies there since, must have been quite a few shipped over.

I must admit that my own favourite Superman era was the early 1960s when they began printing a succession of epic book-length stories (particularly the legendary 'Imaginary Tales!'). And though Curt Swan will always be the number one Superman artist for me, Wayne Boring and Al Plastino (not forgetting Kurt Schaffenberger) provided a welcome touch of variety. In fact Plastino's version was the first one I ever saw way back in 1961 when, upon a day that changed my life forever, my Uncle Cyril ceremoniously presented me and my brother with a small bundle of brand-new DC comics which included Superman no.146. Since then the sight of *any* comic with 'Still Only 10c' on the cover is enough to send a shiver down my spine - even 'Our Fighting Forces' or 'Bob Hope'!

Of course, the nice thing about Al Plastino is that he eventually returned to the DC Universe after some years away from regular comic books when he took over the Batman newspaper strip from Joe Giella - just in time for the Man of Steel to team up with the Caped Crusader (not to mention Aquaman). And this sequence duly appeared on our side of the Atlantic in the pages of Smash!

(Incidentally I've often wondered why DC don't reprint the run of Batman Saturday pages that were serialized in Smash! - especially the ones that were ghosted by Bat-artist extraordinaire Carmine Infantino!)

I,ve got a few of those. Nice.