Daleks in the 21st Century 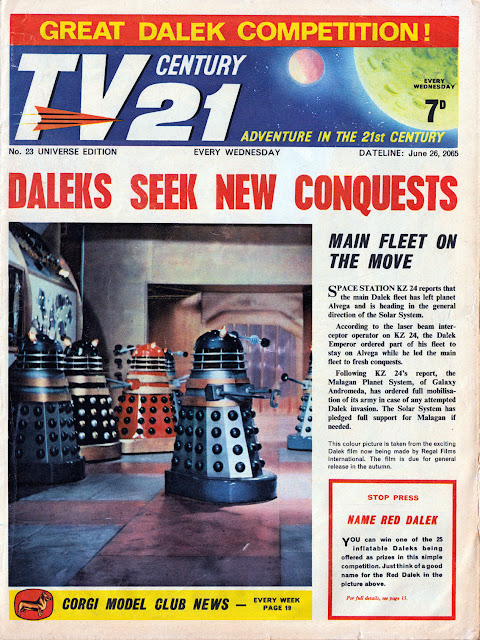 The Daleks return to our TV screens on Saturday night (September 1st, 7.20pm, BBC1) in the start of a five week run of Doctor Who. It occurred to me this week that I've actually seen every Dalek story that's been televised. Yes, I'm that old.

Back in 1965, or 2065 as the comic insisted, TV Century 21 ran a regular Daleks comic strip on its back cover. For me, this was an even bigger draw than the spectacular strips inside which featured Fireball XL5, Stingray, Lady Penelope and others. I was therefore over the moon when TV21 No.23 featured The Daleks as the main cover feature. I'm pretty sure this is the first time The Daleks dominated the cover of any comic, so it's little wonder that this issue is highly collectible.

Covers of TV21 at this time always featured Gerry Anderson characters, so this issue (and a subsequent one which also featured Daleks) were very unusual. The reason they were featured was to promote "the exciting Dalek film being made by Regal Films International". You'll note there's curiously no mention of Doctor Who, even though the movie would be released as Dr.Who and The Daleks. 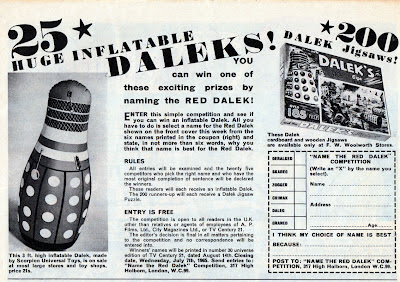 The other reason for the cover feature was because that issue featured a competition to win an Inflatable Dalek by giving a name for the Red Dalek. All readers had to do was explain why they chose one of the six names listed. Interestingly, the comic strip had already featured a red Dalek with a name, - Zeg, - which was a far better than any of those names listed.

Want to see what that issue's Dalek comic strip was like? Here you go...


This strip made such an impression on me when I was six that I distinctly remember making little Plasticine models of the Daleks, their flying saucer, and the snake creature so that I could re-enact the story.

What's great about The Daleks is that even today new generations of children find them just as fascinating as we did when they first appeared. TV21 was set in the 21st Century and now here we are in the real 21st Century and Daleks are still around. Long may they rule!

And is it only me who thought they were scarier in b&w?

Not sure. I never found them scary at all, just exciting! Most of the Thals and suchlike were such drips that I was eagerly looking forward to the next extermination.

lew,
did the daleks strip excite you so much because you had seen them first on tv? now you had comics featuring them that you could look at whenever you wanted. in those days there were no videos or youtube, i dont know if they ever repeat the dr who episodes like they do now. do you think you would have enjoyed them as much if they were only in comics and never were in tv or movies. btw did you go and see the daleks movie when it was in the cinema in the 1960s?

It was just the appearance and attitude of The Daleks that excited us as kids, whether they were on TV, in comics, in jigsaws or whatever. I guess it's the same for kids today.

I didn't know anyone who was actually scared by Daleks, or who hid behind the sofa when Doctor Who was on. I used to think that was a myth but some people have since said the programme actually frightened them. The big softies.

Yes, I saw both Dalek films at the local Ritz cinema when they came out. I still remember queuing to see the first one and looking at the lobby cards.

That inflatable Dalek looked rather like a bowling pin.

I guess the lack of mention of Doctor Who was because of Terry Nation's ownership of the Daleks, a thing apart from the BBC's interests in the Doctor. To this day the BBC has to negotiate with the Nation estate to continue using the Daleks in Doctor Who.

I don't think that'd be the reason because, as you can see, 'Dr.Who' was mentioned every week in the logo box of the Dalek strip itself. Perhaps they just didn't want to mention The Doctor on the cover. (Rival comic TV Comic had the rights to the Doctor Who strip so perhaps that had something to do with it.)

Yup...my young 'uns still get excited every time the Daleks appear on TV, just like I did back in the Seventies. They really do have an enduring appeal.

And they've always been a natural fit with comics, where they can be exactly like the ones in our imaginations. The ruthless chainsword fodder that attacked Abslom Daak are still my favourites.

I could be wrong but I'm pretty sure the design of the Dalek flying saucers used today is based on the ones envisaged by Richard Jennings for TV21 and the Dalek Annuals all those years ago.

When the first Doctor Who film was released I remember that the Daleks took over Santa's grotto in the local Lewis's store in order to promote it. Me and my mum had to queue for hours to see them gliding round their 'control room' with much talk about "exterminating the Doctor", but it was definitely worth it!

Its not the Daleks that are scary - its the Weeping Angels!!!! EEEKKKK!!!

lew,
maybe u be interested in this little piece of dalek ostalgia if you not seen it recently:-
http://www.youtube.com/watch?v=J-tWav99124

Thanks. I've never seen that before!

I wonder what happened to that half-size Dalek?