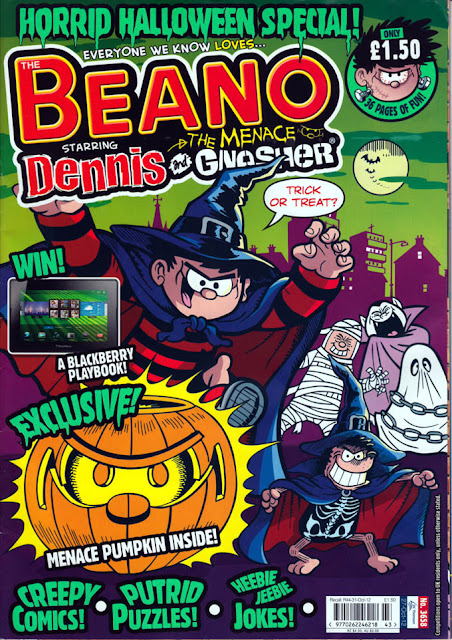 The current issues of The Beano, The Dandy, and BeanoMax all feature a spooky theme to some of the stories to represent Halloween.

As any visit to a shop from Poundland to Asda will reveal, Halloween is big business for retailers these days with masks, toy skeletons, fake blood, witch costumes and all kind of horror-themed goodies for sale. Therefore it makes sense for children's comics to get a piece of supernatural action. Such 'Halloween Specials' were unknown 40 or 50 years ago, and over the last few decades have pretty much replaced the old traditional firework issues. (Although The Dandy and Beano did do a few firework strips last year.)

This week's Beano kicks off with a great cover by Nigel Parkinson and inside he's also drawn a three page Dennis the Menace strip featuring... Frankenswine! There's also Ratz by Hunt Emerson, Minnie the Minx by Laura Howell, Ball Boy by Dave Eastbury and lots more, including a one-off Horrornation Street puzzle page that I did.

Over in The Dandy, a nice eye-catching Desperate Dan cover by Jamie Smart opens the proceedings. Halloween strips inside include The Bogies and Corporal Clott by Nigel Auchterlounie, Bananaman by Wayne Thompson, and My Dad's A Doofus by Jamie Smart. (Remember to keep checking that Dandy countdown clock as we head towards the final print edition!) 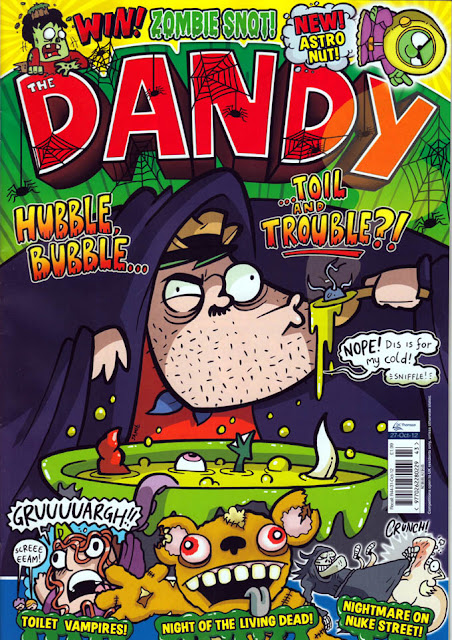 BeanoMax No.70 has been out a few weeks now but also has a monster theme. Spooky stories include The Monster Invasion of Beanotown drawn by Nigel Parkinson, Cuthbert and the Rumpled Pumpkin by Dave Sutherland, and Gnasher's Bite by Barrie Appleby. 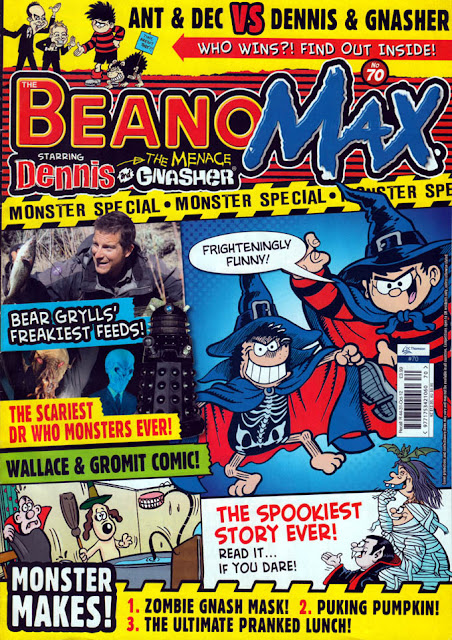 Email ThisBlogThis!Share to TwitterShare to FacebookShare to Pinterest
Labels: BeanoMax, halloween, The Beano, The Dandy

I really like the Haloween issues! I like the purple skies often used and the scary angles!

I don't know why, but comics always seem more creative when they have a theme such as Halloween, Christmas or Caster!

The Phoenix also had a Halloweeny theme with Planet of the Shapes and Bunny VS. Monkey both being Halloween-related. It would be nice if you could include it because The Phoenix deserves far more coverage than it gets!

I'm afraid I no longer subscribe to The Phoenix. When I re-subscribed before there was a serious error on their part (they claimed my credit card had been rejected, - it hadn't, - and I then discovered the subscription had gone through but I'd received no issues). It was eventually rectified with an apology "written" by one of their fictitious characters. Not a very mature way to handle such a serious error in my opinion so when my sub ran out I decided not to renew.

I sometimes pick up issues from Nostalgia & Comics in Birmingham. Good comic, but they need to sort out their admin.

Perhaps you were just low on funds the day they tried to process your order Lew? That's how your card got rejected? It's happened to me once or twice. Embarrassing isn't it?

Any embarrassment should be on their part. There was more than enough in my account to cover a paltry subscription to The Phoenix. As I said, they later admitted to their fault, after I spotted the sub fee HAD been taken from my account, but I don't feel comfortable subscribing again.

Their earlier comic, The DFC, also had problems with subscriptions, albeit not as serious as claiming a card had been rejected when it hadn't.

They need to sort out whatever human error is responsible because this sort of thing puts people off subscribing and it's the hard working contributors, hoping to make a living, who will eventually suffer.

Hmmm, it's not good. It happened to me too but I e-mailed Ross Fraser and mentioned I needed my subscription renewing and it was late so in return I received a free issue!

I eventually got the issues I'd paid for (after I'd notified them of their error) but I'm afraid I'd become too wary to renew once my sub expired.

If I'd been younger, and hooked on the stories, I may have taken the risk but, unless I'm actually working for the comics, I only buy children's comics to keep up with what's going on in the industry, so I'll just buy it occasionally when I see it on the shelves of a comic shop.