This week in 1968: The fate of FANTASTIC 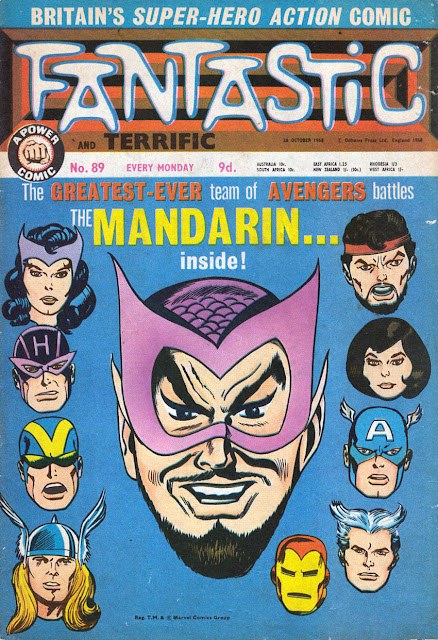 When Odhams began reprinting strips from Marvel Comics (starting with The Incredible Hulk in Smash! in 1966) it was, for many of us, our first exposure to the American superheroes. Therefore Fantastic was warmly welcomed by many when it launched in early 1967 reprinting the first adventures of The Mighty Thor, Iron Man, and the X-Men.

For some, superheroes were an acquired taste and it seems that most UK comic readers preferred the standard adventure stories of Victor or Lion to the extravagances of the heroes created by Stan Lee, Jack Kirby and all. Therefore, with its 89th issue (and having already absorbed its sister paper Terrific) Fantastic left the world of comics forever, as it geared up to merge into Smash! and Pow!

The cover (above) wasn't particularly fantastic, being a composite of vignettes from various Marvel comics and a newly drawn head shot of the villainous Mandarin. You'll notice there's not even a 'Great News Inside, Chums' topline for this last issue, but that was more Fleetway's gimmick than Odhams'.

Inside, all the stories reached their conclusions. Fantastic had been serialising the story from Avengers King-Size Special No.1 for a few weeks, and this issue saw the final part. The tagged-on caption in the last panel promised that Thor, X-Men and The Avengers would still be around the following week in Smash and Pow but that was quite disingenuous, as we'll see later. 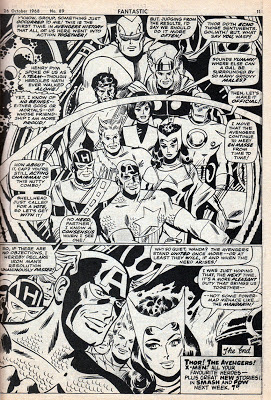 Due to the oddities of scheduling, the continuity of the X-Men was in advance of The Avengers strips, so whilst Fantastic had been reprinting Avengers stories from 1967, the same issue featured X-Men stories from early 1968. This created some confusion with an X-Men/Avengers crossover featuring a different team of Avengers than readers were familiar with. The Black Panther was a particular anomaly, as his introduction in the Fantastic Four stories hadn't even been reprinted yet, never mind his induction into the Avengers! 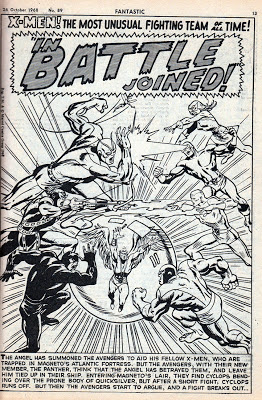 No matter. It featured superheroes hitting each other and that's all we wanted to see when we were nine. Its final page featured the dramatic death of Magneto! Hang on... he survived, right? Not for readers of Fantastic as this was the last X-Men story to be reprinted. It would be many years before Marvel UK got around to reprinting this story, so for a generation of comic readers this was Magneto's fate. Ditto Professor X, who had "died" a few weeks earlier, with his resurrection never to be reprinted. 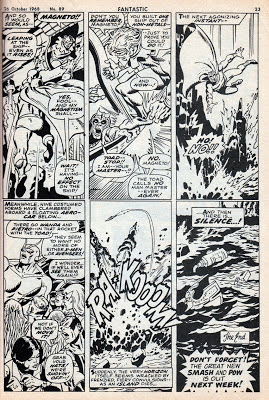 Fantastic had also been reprinting the Hulk and Doctor Strange strips, but those had concluded a few weeks earlier. To fill up a couple of spare pages in the final issue, editors Alf and Bart included a short SF story from one of Marvel's mystery comics. Following it, on page 26, came the official announcement that Fantastic was ending. I quite like the way the fatalistic editors broke the news. "It all has to come to an end SOME time! That's life!" 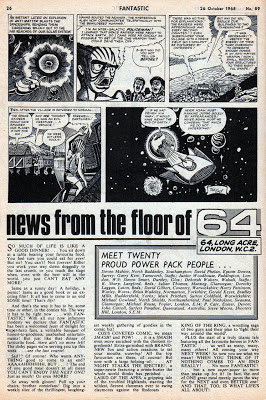 Following the Thor story came another announcement on the inside back cover, promising that all the Marvel characters, including the Hulk, would be in one "book length tale" in Smash! and Pow! the following week. Untrue, as it turned out. 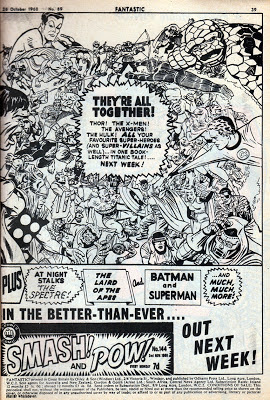 The following Saturday saw the united comic hit the stands with its gobfull of a title Smash! and Pow! incorporating Fantastic. The comic featured 36 pages and was very much a continuation of Smash and Pow, featuring a good balance of humour strips, adventure serials and a couple of Marvel reprints. 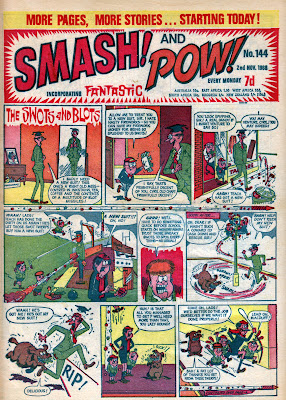 Thor was the only strip to actually make the transition from Fantastic and, because of the larger page size of Smash, the strip was now resized to fit approximately two Marvel pages onto one UK page. 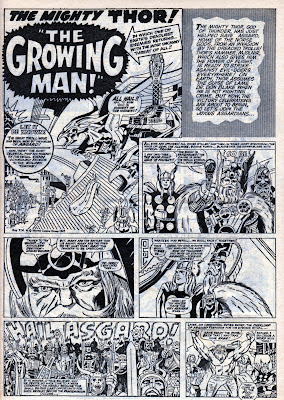 The other Marvel strip wasn't the promised Avengers or the X-Men. Neither of those strips would again appear in an Odhams comic. Instead, readers were treated to a serialisation of Fantastic Four Annual No.3. Admittedly, over the coming weeks it would feature most of Marvel's characters but it wasn't exactly the "book length tale" advertised. Part one ran to just three pages. Another shock for readers was that it took place in a continuity prior to the stories they'd read in Fantastic. As a pasted on caption helpfully told us "This story is set at a time when Professor X was still alive and leading the X-Men!" 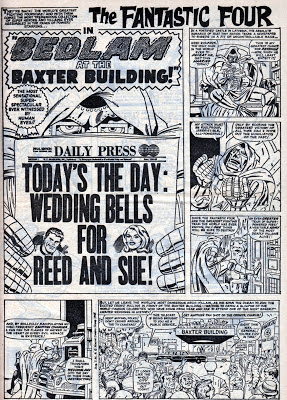 When the reprint of Reed and Sue's wedding was concluded, Smash continued with reprints of the Fantastic Four, along with Thor, until the final Odhams issue in 1969. Then, UK comics bid goodbye to Marvel heroes for a few years as IPC revamped Smash! into a traditional boys comic.

Fantastic may have only been around for a year and a half but for those of us who were children back then it certainly lived up to its name. It was truly a fantastic way to immerse oneself in the Marvel universe every Saturday.

Flashback to the first issue:
http://lewstringer.blogspot.co.uk/2007/02/40-year-flashback-fantastic-is-launched.html
Posted by Lew Stringer at 01:02

Wonder if Steve Moore, last listed in the "Power Packed People" frame on that editorial page, is the same Steve Moore of UK comics writing fame...?

Well spotted. Yes, that's definitely a reference to the same Steve Moore as he was an office junior on Fantastic, Smash etc back then. I'd guess that either Steve smuggled his name in there himself or the editors did it for him as a nice acknowledgement.

I remember buying that one. I was choked to be down to one weekly comic instead of the 5 I'd been buying a year earlier. My parents were probably pleased though - reading never went down well in my house so they were probably hoping I'd take up football or fishing instead.

Well at least I still had Smash! for a couple more months. Losing Smash! - and on my 9th birthday at that - was the catalyst that eventually pushed me away from UK comics. I especially missed the Cloak.

I enjoyed Countdown while it lasted but otherwise that was it for me until 2000AD started up a few years later.

The more I hear from people who enjoyed The Cloak, the more I think it was a bad decision by IPC to drop it. At one stage it was more popular than Spider-Man in Pow! but sadly it didn't conveniently fit into a category for the types of schoolkid characters that IPC wanted to do when they took over the comics. Sometimes editors ignore the wishes of the readers and reshape comics to suit their own agenda, which to me seems to defeat the objective of keeping the readers happy.

With The Cloak I also suspect that IPC weren't too keen on Mike Higgs' ground-breaking deal with Odhams whereby he retained some of his creator's rights.

I don't think that'd be the reason Phil, as IPC went ahead and reprinted a Cloak story in the Wham and Pow Annual 1974 without consulting Mike about it.

I'm not sure if any freelancer had a contract at Odhams. Obviously if a freelance artist worked from a script supplied by staff writers, or an artist took over an existing strip, then copyright would still presumably belong to the company, but in Mike's case he solely created The Cloak and wrote and drew the stories himself.