This week in 1915: ILLUSTRATED CHIPS 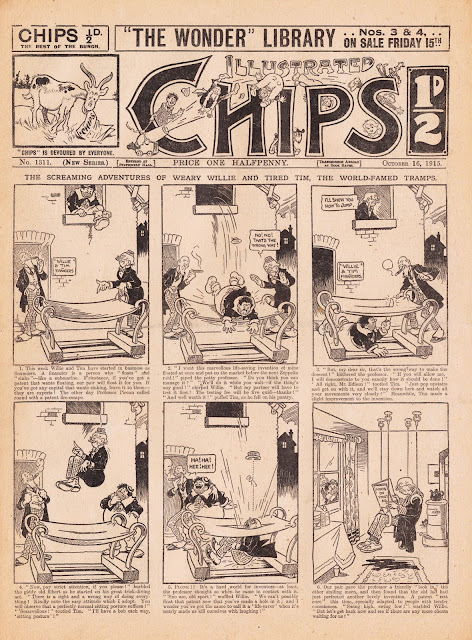 Here's a few bits and bobs from the issue No.1311 of Illustrated Chips, that would have been in the shops 97 years ago this week! On the cover, as always, were Weary Willie and Tired Tim, now drawn by Percy Cocking following the passing of original artist Tom Browne five years earlier. Cocking would draw the strip until the final issue in 1953! A fantastic achievement. 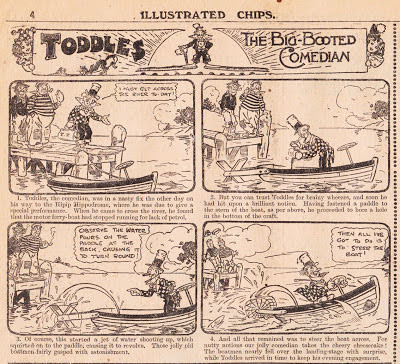 In 1915 the Great War was raging and comics reflected this. Chips featured The Artful Allies Tommy and Jacques clobbering a couple of German soldiers... 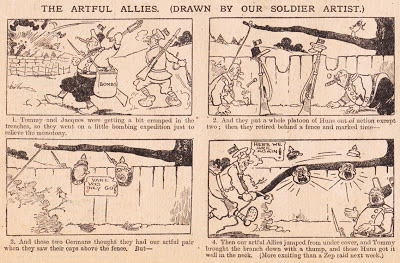 Amalgamated Press' The Wonder Library books, promoted on the cover topline, were also plugged inside with an advert for the latest two books. It appears they were 120 page complete novels priced 3d (1p) each. A Google search reveals they featured reprints of stories that had originally appeared in Chips and other A.P. comics, published two issues a month, and had a very short life, ending after just 14 issues. 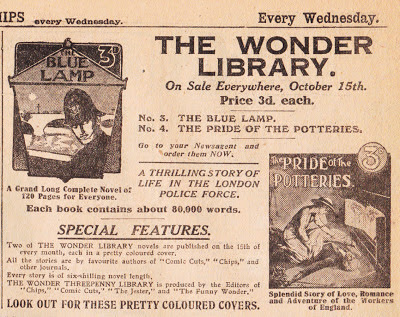 Advertisements in old comics are always useful for providing a taste of the times. 97 years ago, long before Wii games and DVDs, Chips was advertising rings, pushbikes, air rifles, magic tricks, cures for blushing and aids to increase height! It's evident from this that the demographic for weekly comics back then was definitely not confined to 6 to 10 year olds. 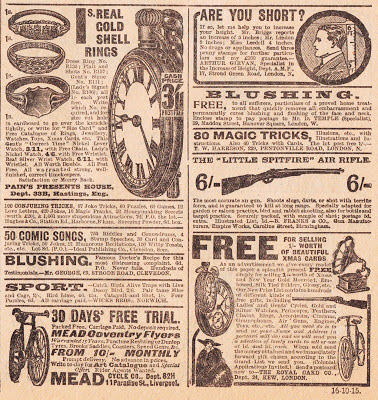 On the back page, the ever-present and always entertaining Casey Court. The cartoon had a number of illustrators over the years but going by the little 'V' signature smuggled into the bottom right, I'm guessing this one was drawn by M.C. Vietch. 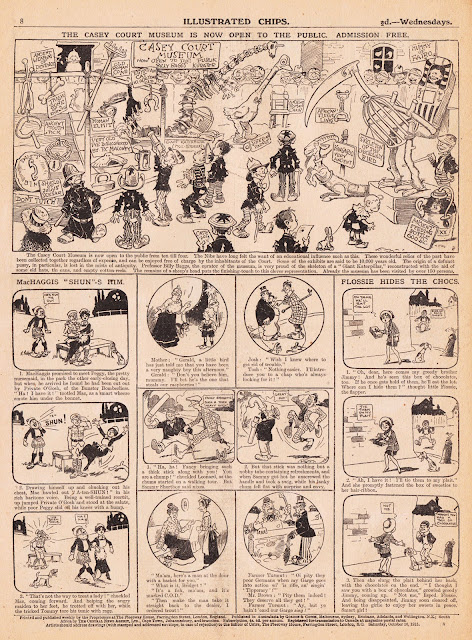 Great to see the whole issue..

Of course Casey's court is the best..

I remember a postcard size book with lots of Casey's court in the 80's..there was another one on Tiger Tim I think...wished I'd bought it at the time..

It's not the whole issue by the way. Just two pages and a few small sections from other pages.

Mike Higgs produced that Casey Court book. I remember the bound collections of Chips being in his studio, on loan from Fleetway, for him to scan. The book he did was bigger than postcard size though. It was about A4. I have it somewhere. Must dig it out when I get a minute or two.

The Wonder Library doesn't sound any different to the already-running Boys' Friend Library, which began in 1906. No wonder it ended so quickly!
The Sexton Blake Library also began in 1915, is it possible one was "converted" into the other? I beleive the first two issues of The Boys' friend Library were actually called The Jack, Sam & Pete library, but it was given a more general title and used to reprint serials (or stitch several short stories together into one long one). The first SBL was definitely marked "No 1", though.

As a resident of Stoke-on-Trent I'd love to see a copy of 'Pride of the Potteries'. I guess this was a testimony to the enormous vogue for Arnold Bennett's 'Five Towns' novels such as 'Clayhanger' and 'The Card' (I've even got an advert for 'Sexton Blake in the Five Towns' somewhere!).

Yet another new comic for me to adore! I'm loving 'Casey Court', must start digging more of this out soon! :D