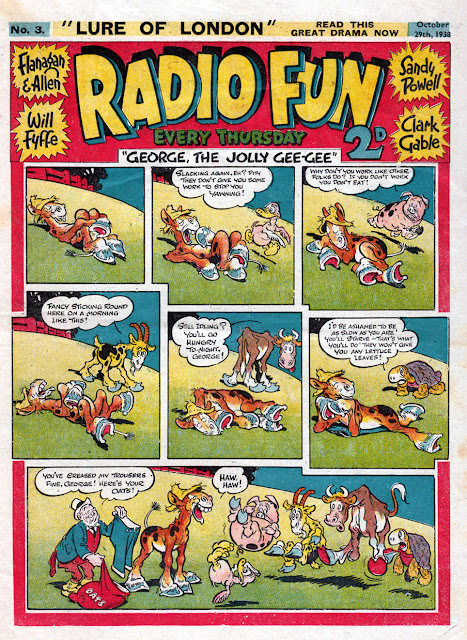 You've seen samples of Radio Fun on this blog from the 1940s and 1950s but here's a few pages from No.3, the earliest edition in my collection, which was on sale exactly 74 years ago this week, in October 1938.

In these early issues, Radio Fun had a bright full colour cover. Sadly WW2 put paid to that and printing limitations confined it to red spot colour for the rest of its long run. Here though is an eye-catching full colour cover where publishers Amalgamated Press are clearly trying to emulate the style of their rival comics Dandy and Beano. Like their rivals, Radio Fun even had an animal star on the cover, even though it had nothing to do with radio! However, despite lovely artwork by Roy Wilson, George the Jolly Gee-Gee was no Korky the Cat. By issue 18 (seen here) the nag was relegated inside the comic, whilst Big Hearted Arthur (Askey) was promoted to a more fitting position on the cover.

Like its DC Thomson rivals, Radio Fun had 28 pages in this pre-war era. The contents were evenly divided between comic strip and prose stories. Variety act Flanagan and Allen were the stars of the first strip inside the comic. Artwork by veteran illustrator Alex Akerbladh, a Swedish born artist who had been working for AP comics since 1909. 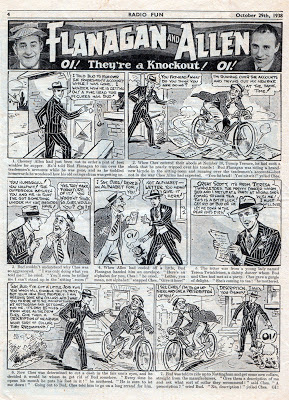 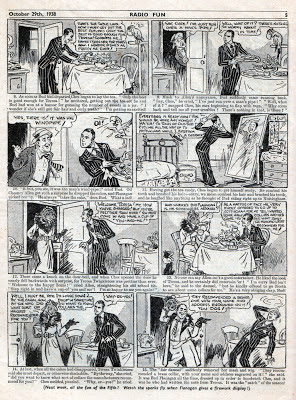 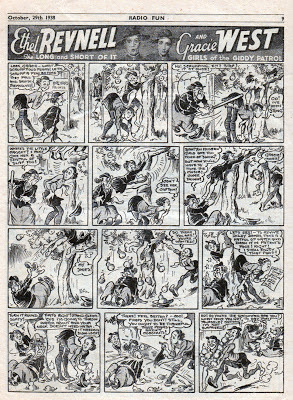 Whilst it was obviously a bit of fun for the comic to show comedy performers getting involved in scrapes, it seemed more surreal when the same practice was employed for the adventure strips. Here's the actor Clark Gable portrayed as having a lifestyle of deadly danger and intrigue. Artwork by George Heath... 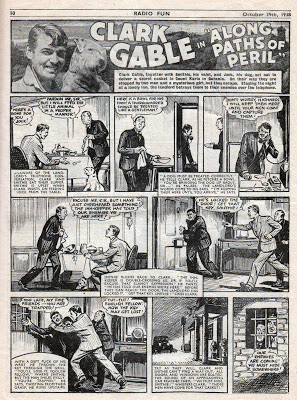 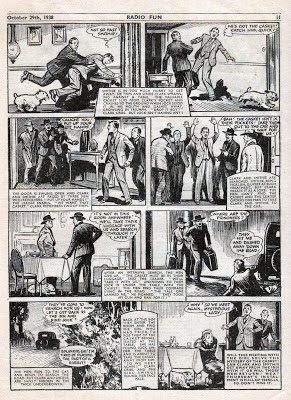 The centre pages of this issue featured a fantastic strip drawn by George Parlett. Radio Fun Music Hall broke out of the conventions of traditional framed panels, preferring to use a fluid mixture of artwork and hand-lettered text. Notice how tight the blouse is on Sweet Nell (or "a nice bit of stuff" as she's called here). Clearly, Radio Fun was aimed at kids and their dads! 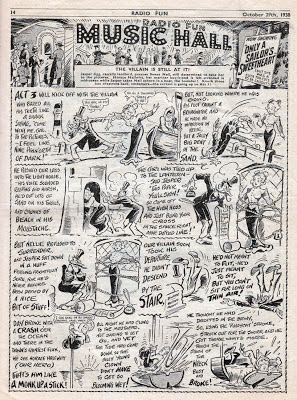 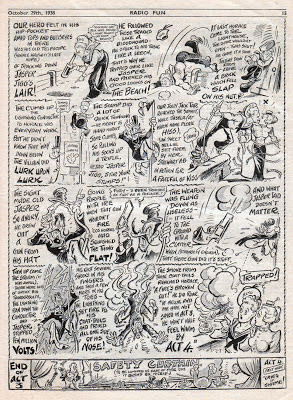 On the back page, Big-Hearted Arthur, another Reg Parlett strip. As I mentioned earlier, this would become the cover strip for a while from issue 18. 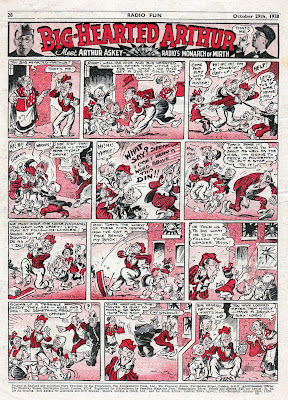 I hope you've enjoyed this brief time-trip to 1938. Click on the images to see them much larger, and you may need to click again to see them larger still.

Ethell Revnel appears to be giving out some overt sexual body language! Was that intentional, and was it considered appropriate?

I think she's supposed to resemble an ostrich in her stance but I see what you mean. Just a bit of fun for the dads again I guess.

Always wondered how many of the famous people gave permission to use there name and likeness, and how many were just there 'agents', without even telling them, so they never even knew about it...

Legend has it that when George Wakefield was drawing the Laurel & Hardy strip for Film Fun, the publishers forbade him from meeting Stan and Ollie when they toured the UK because A.P. had never asked their permission to use them in a comic.

It was a different world back then. These days licences are water tight and celebs (or their agents) have to approve their likenesses. Some, such as certain Doctor Who stars, are kind enough to let comic artists on set so they can sketch them for reference.

I've just remembered that Mike Noble said that he visited the ATV studios in 1970 when he was drawing Timeslip so he could do some likenesses of the actors.

You're welcome, Peter. I thought you'd like this issue.

Great to see an early issue! Its a pity those bright colourful covers didn't last longer!

What is the 'Lure of London' advertised at the top of the front page?

Lure of London was a prose serial about someone's adventures in the bright lights of London. I might upload part of it later when I have time. Deadlines beckon at the moment.

Oh, and another quick thing.. didn't George the Jolly Gee-gee move to 'Wonder' in the 40s?

Yes, I think they may have been reprints but I'm not sure.

That jug of tea has a rather beery looking head on it!

Yes, I think "a jug of cold tea" implied something a bit stronger. There seem to be quite a few innuendos in these old comics. All part of the fun in the days before such comics became exclusively aimed at children.

The reason Ethel Revnell is bent double in most of the frames can be found in their 'bill matter' at the top of the strip. The duo's disparate heights meant that she and Gracie West couldn't both be depicted standing upright in the same frame.

Not sure about that. They both manage to stand upright in a cinema frame. :)