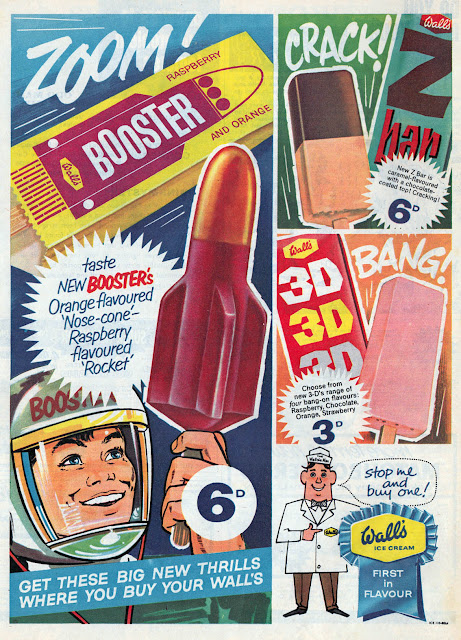 From Boys' World this week in 1963, an advert for three tasty looking lollies that are no longer produced. Z Bar looks familiar, and I think that would have been my choice out of the three. (I was never keen on ice lollies, only ice cream ones.)

I know some people hate to see advertisements in comics but I like 'em because they're representative of their period, both historically and in terms of design. They also helped finance a comic to keep it going!

If you're interested in seeing more old adverts from British comics you can click on the following links:

Email ThisBlogThis!Share to TwitterShare to FacebookShare to Pinterest
Labels: advertisements

I wouldn't call most of those advertisenmens for old comics, more like advertisemens for produce I would say like confectionary and such, is there a poiunt to it really, I don't see it lew but perhaps you can explain there is the sugar angle but thats topical but thats topical but I dont see why it is anything to do with comics there are sweet free gifts some times some times but there arent any connections with comics as i see it, thats as i see it but there arent any connections

If you're asking what the connection to comics is, it's simply that the ads appeared in the old comics. I thought they'd be of interest to readers of this blog.

And some of those like this one are illustrations. Sometimes created by the same artists as the comics, sometime others. And it's certainly interesting

Yes, some top quality art on some too. Working in advertising was where the money was back then so they attracted some excellent artists.

Some are illustrated and some use photos and of the produce but why is it here I don't know but maybe ma you van ellucidate or what they are here Lew, you know I won't go into details now but there was there an ad vert for jam and it was here but why I dont know, you remember the golllywoggs they were banned and it was right so I see that but why the sugar topic, we need some sugar and now its cionsreed evill whicj is where I'm coming from, you see I'm rambling but excuse the phone

I think you'll find less sugar is good. Thanks for commenting.

I liked wiz and Lord toffingham which had toffee inside the ice cream. Yummy!

Pew BSTs comments had me ROTF LMAO! Thanks for printing them! I find advertising quite interesting btw and often buy old magazines from WW2 in part for the ads!

It’s always nice to see some of the old adverts that appeared in the old comics. Buying a sweet, pop (ginger) or an ice lolly was very much linked to the comic buying experience back then. As soon as we got our pocket money we would make a mad dash to the newsagents to pick up our favourite comic and a wee treat . For me I will always associate the first issue of “Jet” with Cremola foam (not sure if that was UK wide or just Scotland) and early 1970s Lions comics with “Super Mousse “ (it took ages for them to come north of the border and was always advertised on the back page on the comics) . And the adverts for “Blobs”, “Count Draculas deadly Secret” (ice lolly) and “Cresta” drink (“its frothy man”) always reminds me of buying my UK comics back in the day. No doubt when I click on your advert links I will remember more of these. Saying that I don't recall any of the ice lollies in the advert (I thought it was Zoom at first).