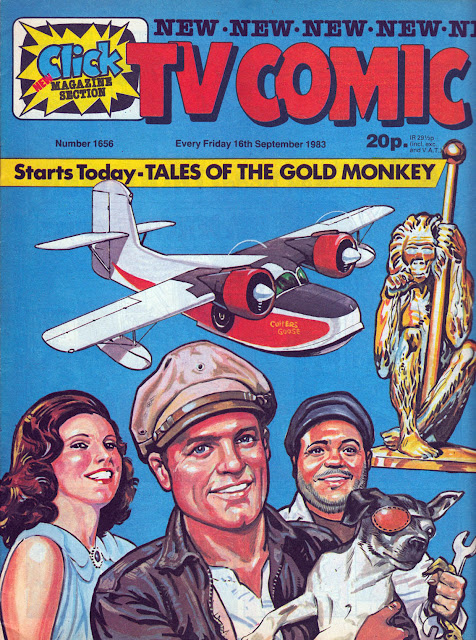 After posting some of Geoff Campion's work here the other day it reminded me that although Geoff was usually associated with IPC comics, he did also contribute to Polystyle's TV Comic for a short while.

In TV Comic No.1656, cover dated 16th September 1983, the weekly began a new series called Tales of the Gold Monkey, based on the American TV show. (Which was basically a Raiders of the Lost Ark for the small screen.) Geoff Campion provided the cover for the debut issue, and the artwork for the early episodes of the strip. Here's Geoff's opening episode, and a nicely drawn spread it is too... 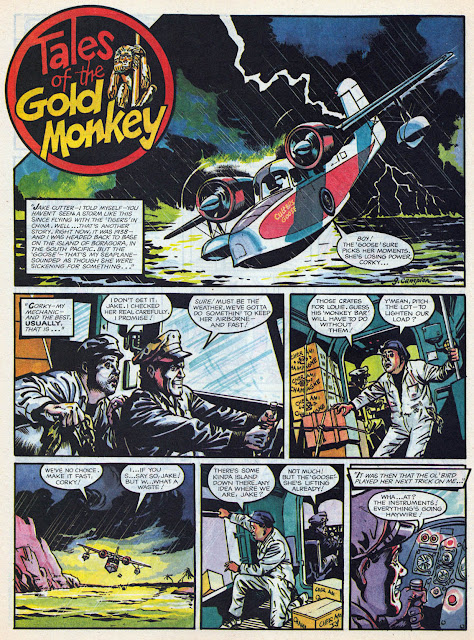 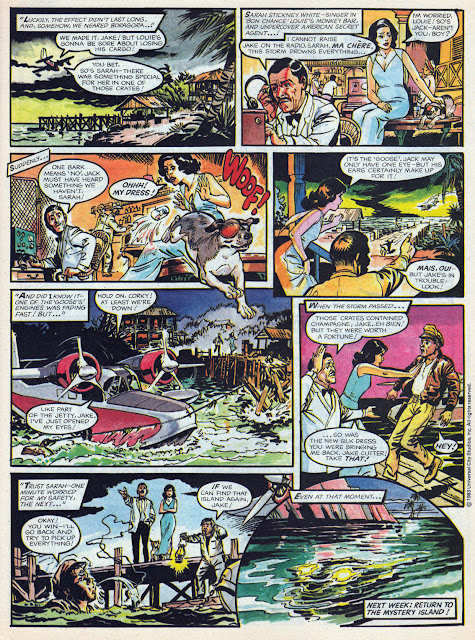 Tales of the Gold Monkey ended with the final issue of TV Comic in 1984, and the later episodes were drawn by Keith Page.

Very good to see this. TOTGM was a great show (shown on Monday nights in BBC ONE's 'imports' slot) that should have ran longer than a single season. Apparently there was friction between the creative team (who saw it as a straight adventure show) and the network (who wanted a RAIDERS style fantasy) which contributed to the swift cancellation.

Amazing to think that the bulk of the Pacific-set show was actually shot on the Universal backlot. The abandoned Monkey Bar and dock can be spied in a final year episode of KNIGHT RIDER.

TV COMIC was quietly doing a range of adventure strips in its final half-decade. It also ran original BATTLE OF THE PLANETS strips (overlooked during the animation revival of the early 2000s when the contemporary US strips were reprinted) and THE A-TEAM (before LOOK-IN took on the license). The latter strips were repackaged into a hard-to-find one-shot special.

Thanks for that info. I think I only saw one, or part of one episode. It wasn't really for me, and in the 1980s Monday nights was one of the evenings I'd be out.

I'll be showing a Battle of the Planets strip soon! I started buying TV Comic again in the early 1980s after a gap of several years. It was past its best by then but it was distinct from other comics so I liked it. The final issue was strange, as it didn't even mention it was ending but there was still a finality about the tone of it that you just knew it was the end. A shame.

You state that British comics are not dead but that they have just moved from newsagents to specialist shops. This is not something that will grow the industry and could damage it quite a bit

How can it possibly damage the industry or restrict growth? The alternative is no comics at all, as getting non-licensed comics into newsagents is near-impossible and too expensive for most publishers.