The Treasury of British Comics - so far 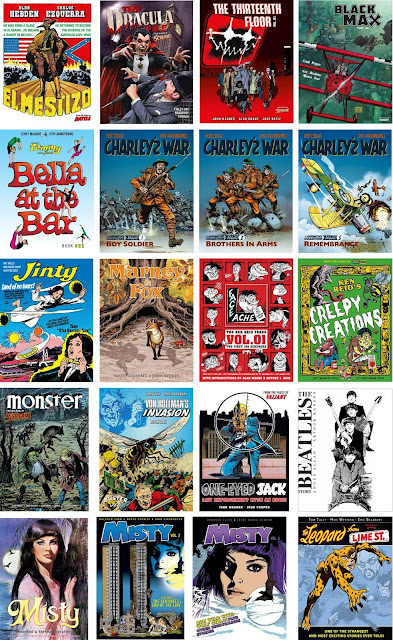 It's an impressive sight isn't it? All the covers of the books in The Treasury of British Comics line. Ten of these have already been published, and the other ten are on their way. Just a couple of years ago, fans had almost given up hope to see their favourites back in print, and now we're spoiled for choice. You can order the books directly from the publishers here:
https://treasuryofbritishcomics.com

Hopefully, this is just the beginning, and we'll see many more classic British strips reprinted over the years to come. Which stories would you like to see Rebellion reprint? Remember, they only own the rights to the IPC comics published from 1970 onwards (with a few that fall prior to that, such as Whizzer and Chips which started in 1969, and Roy of the Rovers). Also, some material from Oink! is creator-owned, and the licensed titles such as Sonic the Comic or Thunderbirds are not part of the acquisition.

Obviously, Rebellion will give preference to material that has the best potential to sell, so a collection of Gus Gorilla strips from Cor!! probably isn't likely to be part of their future plans. On the other hand, a collection of Dredger strips from Action could work, I think.

That would be good. I don't know how many Leo Baxendale did, or how the later ones compare to Leo's, so I'm not sure how well they'd do, but it'd be nice to see.

i hope the Jinty volume sells well so there's another similar collection of SF stories from the comic.
As far as the humour titles go, a best of Sweeny Toddler, or Frankie Stein (from Whoopee), or The Gasworks Gang (from Cor!!) or if Rebellion own it - The Swots and the Blots from Smash!.
For adventure stories, Hellman of Hammer Force (from Action, then Battle) would be great, and of course more Johnny Red!
More Garth Ennis writing new Johnny Red adventures (pref with Simon Coleby art)
and even better would be if Rebellion gave Pat Mills full creator rights and paid him enough to get well started on a continuation of Charley's War - for example we could see Charley posted to Mesopotamia post-WW1.

That's the only drawback - so many stories to choose from, which means even the ones likely to be considered popular enough to get reprinted might not find a slot for a long time. I lean towards adventure strips mostly, so I'd love to see the rest of Leopard from Lime Street, Adam Eterno, Thunderbolt the Avenger, Sergeant Strong, Steel Commando, The Mind of Wolfie Smith, The Shadow of the Snake, Menace of the White Eyes, Masters of Menace, but also more humorous fare such as The Amazing Three and Hot-Shot Hamish (I got the annual released a decade or so back, and despite not being a big fan of football, I found it immensely enjoyable).

Yes, all of those would be good to see collected. Sadly, Rebellion don't own The Swots and the Blots, John, as that started before 1970 and they don't own anything from Smash! Frankie Stein is another they don't own, as the character originated in Wham! in 1964.

I would enjoy anything by Baxendale, Mike Lacey, Robert Nixon, Reg Parlett, Brian Walker, Frank McDiarmid... And so many others. But I'm already glad we have the Ken Reid collections !

It would be nice to see more humour collections wouldn't it? They're not an easy thing to sell to some comic shop retailers but I think they'd do better in High Street bookshops like Waterstones. I don't envy their task though. Comics aren't well respected in the UK like they are in Europe.

I think Baxendale had work in Whizzer and Chips, so he's the obvious choice for me.

I think Baxendale had work in Whizzer and Chips. So he'd be the obvious choice forme.

I think Charlie Peace would be a nice collection along with Terror Toys.

As I recall, Leo Baxendale didn't contribute much to Whizzer and Chips. The first few episodes of Champ and then...? I could be mistaken, but I don't remember anything else by him in there.

I'm not sure of the rights to the Charlie Peace strip, Clive. Ok, he was a historical character so his name is in the public domain but the Buster strips started way before 1970 so they may not have the rights to reprint those old stories.

I am a great fan of Solano Lopez and of Eric Bradbury. So any strip either of them drew.

Me too, Sid. I'm surprised they don't have any books by Lopez on the schedule yet as his work is popular internationally too. My first choices of his stuff would be Adam Eterno and/or Nipper.

Funny that he used to draw a character named Adam Eterno as one of his first comics (and one that's best remembered) was El Ernauta. Any Solano López would be good to me.

Lew, you're right about the humour strips - patrimonial books are such a big deal in France & Belgium that I sometimes forget that UK is just starting to do the same. Yet there must be a way to do it - and Sweeny Toddler and / or Badtime Bedtime could manage to do that. That is, until DC realize the potential they own. Patience is the key I guess ! ;)

(Thinking about it, doesn't Tom Thug belong to Rebellion ? That could be a nice collection.)

I'd love to see Ron Smith's work from girls' comics like Jinty collected. To me he's the foremost British comics artist.

I really can't see them collecting any of my work I'm afraid, Roberto. I would guess they'll focus on Ken Reid, Leo Baxendale, and Tom Paterson.

Don’t put yourself down. So many people would buy a Lew Stringer collection - myself included. Yours was a name I saw time and time again on my favourite strips.

It could be worth asking : Tom Thug or Pete & his Pimple are such iconic characters. Instead of Egmont, Rebellion are people you can talk to. And if they don't want to use them, maybe they could give / sell you back the rights ?

The rights with Oink! characters are "a grey area" as an old Fleetway editor put it. They'd need to discuss it with the creators so I think they're perhaps more likely to reprint material they definitely own first, such as Ken Reid strips from Scorcher etc.

I would love to see a Tom Patterson collection. The Park and Jake's 7 and Full o beans were very influential on my sense of humour. You might be able to tell I was reading Jackpot mostly.

I didn't read one single issue of Jackpot but ironically, my first work for IPC was ghosting Tom Paterson on the 1986 Jackpot Annual. (A four page Scooper story.)

I don't have the 1986 Jackpot annual but I loved Scooper too. Jackpot was actually my brother's comic. But I read it all and developed a love for Paterson. If I could find some old Jackpots cheaply I'd be thrilled. But living in the US is pretty unlikely

I know it's out of the time zone but.. doesn't Rebellion own Eagle? I'm kinda surprised something like Luck of the Legion isn't out.. that was popular enough to even have a range of novels also written by the strips main writer of Geoffrey Bond

No, Eagle and its strips are owned by the Dan Dare Corporation. Fleetway sold it off years ago.

Even if the Dan Dare Corporation hadn't acquired it, the original Eagle would be off-limits anyway because it was from before 1970. I don't think there's much of a demand for those strips now anyway, sadly. Most people who grew up with the 1950s strips are around 70 years old now.