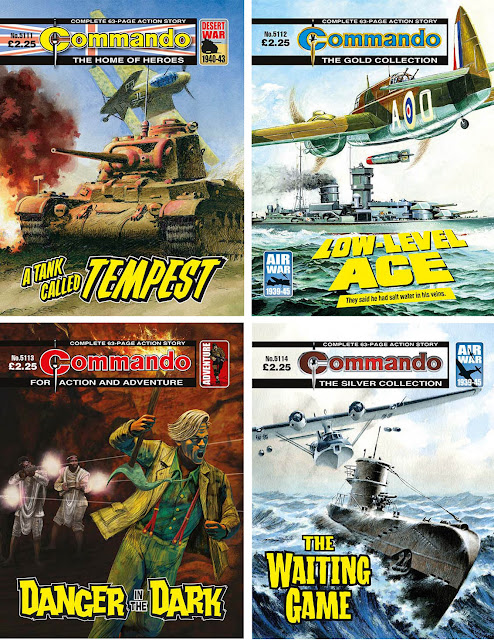 It may sound like the first line of a joke, but when an Australian, a Kiwi, a South African, and an English soldier were all stranded in a single tank in the North African desert, there was only one punchline the troops had in mind… Originally intended as a propaganda piece to showcase Commonwealth nations working together, the troublemaking quartet soon get separated from their lines, leaving them at each others’ – and Jerry’s throats.

Jaume Forns’ steadfast attention to different nationals’ uniforms is put to the test in this George Low tale, which takes the Commando trope of bickering foes come friends and cranks it up to eleven.

Pilot Officer Bob Tanner flew his Beaufort so low that sometimes his crew “thought they were in a submarine”! But his men always trusted him, even when the waves licked at the undercarriage of their aircraft. A man who didn’t trust Tanner, however, was Pilot Officer Paul Scott. Pranks between airmen were one thing, but when Tanner uncovered a Nazi spy in the area and a turncoat among his superiors, jealously soon took hold of Scott, turning rivalry to resentment…

Joining the commemoration of the Royal Air Force’s 100 years of service, this Gold issue reprint focuses on the exploits of a Bristol Beaufort torpedo bomber. Low-Level Ace sees one of Commando’s most the dynamic pairings of writer and interior artist, CG Walker and CT Rigby, paying an excellent homage to the bravery and determination of those who serve in the RAF.

5113: Action and Adventure: Danger in the Dark

Danger Doyle is back! This time, he and his reluctant secret agent partner, Ned Finch, are shipped off to Italian-occupied Abyssinia for some well-deserved “time-off”. But as with everything to do with British Intelligence Organisation Omega, Danger and Ned are not so shocked to realise that there was an ulterior motive to their little holiday break in war torn Africa, as our hapless duo face-off against fascism, and find some rather interesting artefacts along the way.

In the second instalment of writer Stephen Walsh and artist Keith Page’s Danger series, the antics are upped even higher as Ulysses ‘Danger’ Doyle adds to his list of life-saving accolades, while Ned continues to roll his eyes and prays that one day he might just catch a break.

As RAF Pilot Officer Bob Barnes cruised the West African coast, he scanned the wave bands on his radio. He never expected to tune into a U-Boat’s frequency, but when he overhears a Morse Code message and plots the course, the bearings lead north-east of Cape Town —inland. Either the Jerries had started putting wheels on their submarines or something else was afoot, and Jimmy was about to find out just what that was…

Another celebration of the centenary of the Royal Air Force, KP MacKenzie’s ‘The Waiting Game’, like ‘Low-Level Ace’, focuses on bombers targeting U-Boats, but this time from the perspective of a navigator in a Catalina. Jose Maria Jorge’s interior art is just as thrilling as the story, while Ian Kennedy’s exhilarating cover has the Catalina almost bouncing off the waves as it gives chase to the fleeing U-Boat!