What Would YOU Do? 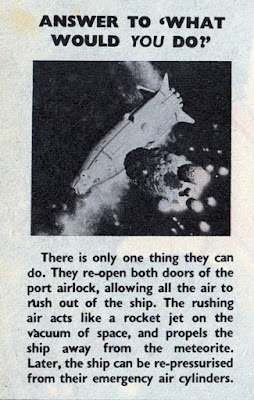 In 1963 and 1964, the weekly comic magazine Boys' World ran a feature on its covers entitled What Would YOU Do? Each week the readers would be presented with a challenge to solve, with the answer revealed inside. The images featured top quality artwork by the likes of Brian Lewis, Gerry Embleton, James McConnell and more.

Six years later, the newly combined Lion and Eagle resurrected the feature in 1969 by using the same challenges, but with redrawn artwork by Geoff Campion. Here's four of them for you to compare, along with their solutions.

Now, you might be wondering why IPC didn't simply reprint the old Boys' World covers instead of commissioning new artwork? Two reasons. One being that Boys' World had been printed on top quality glossy paper but Lion was using cheap newsprint that wouldn't have reproduced the painted artwork very well, and perhaps another reason was that they wanted covers that were in keeping with the interiors; ie: linework by one of their current artists.

Anyway, I thought it was an interesting bit of trivia, and a good opportunity to show some top class comic covers! 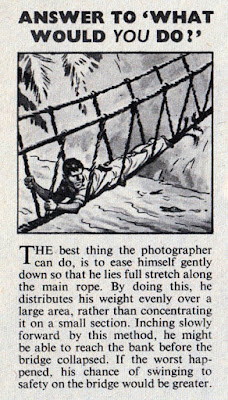 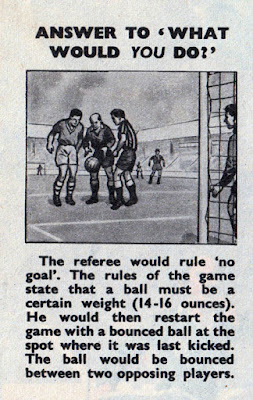 But how much of the weight of a football is the air inside it? Well... there's probably a rule about the shape, too? On which, views vary...

Getting caught up with my email (or at least attempting to). The chap kicking the ball looks somewhat like one of the members of Carsons Cubs, a strip that was still running at the time.In fact a quick check on GCD and I see the strip is the same. If that is supposed to be Newton Town Then I daresay that was probably the only time a feature got a cover appearance during the run of Lion and Eagle. I noticed that as the strip was a favourite of mine. It's also what got me interested in soccer.

Yes, it says it's Carson's Cubs in the caption on the cover, John. Looks like they chose to plug the Cubs even though it was a rewritten cover feature from Boys' World.