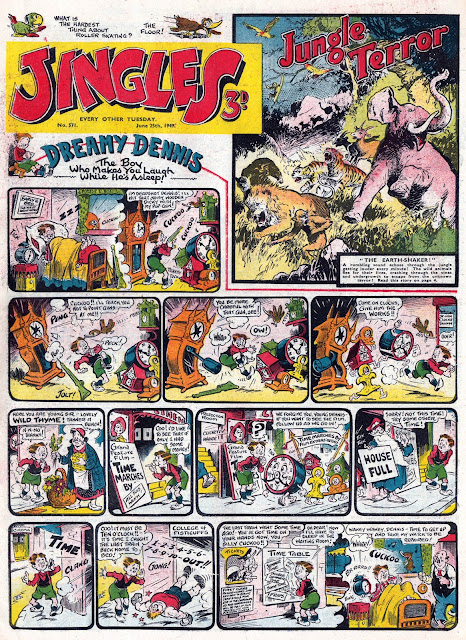 I did a post on this title a few years ago, but that was a slightly earlier issue. Here are a few pages from Jingles No.571, dated July 25th 1949. Another tabloid-sized comic published by The Amalgamated Press from Fleetway House in Farrington Street, London.

A.P. still dominated the UK comic scene at this time but their rivals in Dundee were proving to be fierce competitors and readers were preferring the more modern-looking Beano and Dandy to comics such as Jingles which were looking quite old fashioned by this time.

Nevertheless, Jingles is a nice lively comic and features some top class cartoonists of the period. The cover strip, Dreamy Dennis, is by Albert Pease I believe.

The adventure strip Strongheart, The Wonder Dog of the Woods, was one of several "heroic dog" strips in comics. (The best remembered being The Dandy's Black Bob.) However, Strongheart preceded Black Bob, and the strip was based on the dog of the same name that starred in films in the 1920s. Sadly, Strongheart was long gone by the time this strip appeared. The comic strip was drawn by Hilda Boswell, one of the few women working in comics back then.

Jolly Jingles, the strip sharing the page with Strongheart, was drawn by George Parlett, brother to Reg Parlett... 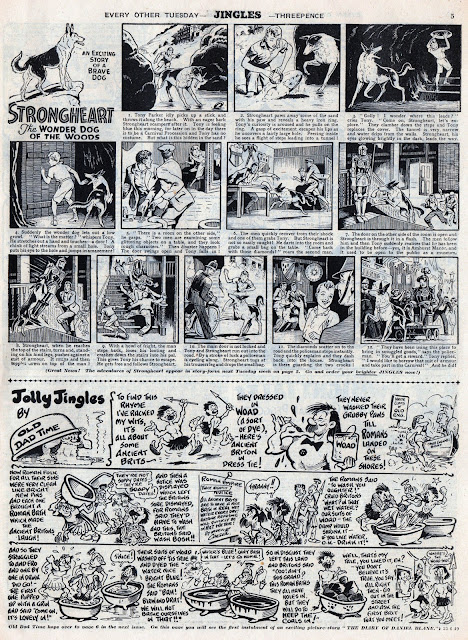 Jimmy Jolly and his Magic Brolly was drawn by the master of golden age slapstick comics, Roy Wilson. Other A.P. cartoonists of the time were instructed to mimic Wilson's style, which is why it's sometimes difficult to identify who drew what. Roy Wilson's style influenced the look of comics from A.P., and later Fleetway and IPC, for years, and elements are still noticeable today. (I've certainly absorbed some of his techniques into my style but I'd never consider myself in his league of course.) 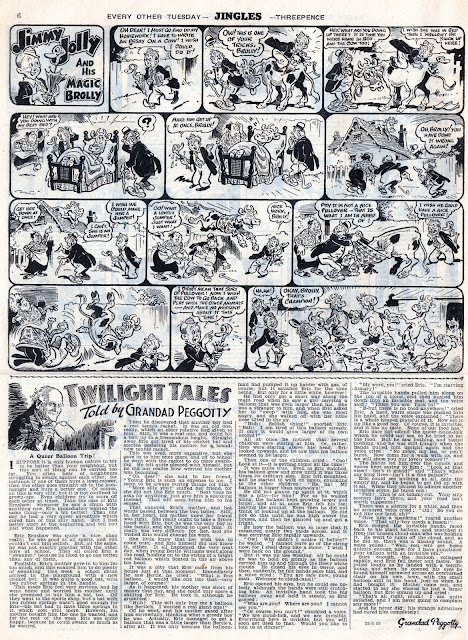 On the back page, another adventure serial. Nicely illustrated, but I'm afraid I don't know who drew it. I feel I should, as the style looks familiar. Can anyone identify the artist? 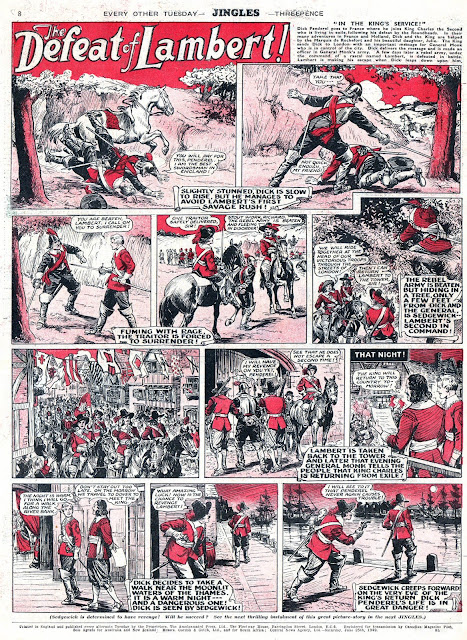 Jingles ran from 1934 to 1954, then merged into TV Fun. The copyright to this material would now be part of Rebellion Publishing's recent acquisition I believe. It would be nice to see some strips from this period back in print, just for the sake of the heritage of British comics if nothing else. Roy Wilson certainly deserves a collection of some of his work. However, one has to be realistic and it's unlikely that many readers would actually buy such a book. People tend to mainly be interested in the sphere of their own nostalgia unfortunately. Personally, I've always found the whole history and development of comics to be fascinating, but there aren't enough of us to support reprints of material of this vintage. Or are there? What do you think?

It would be great to see at least one issue of these old comics = let's say pre-1930 = be reproduced for posterity - perhaps by a crowd-funding appeal. What do you think? Before 1930, copyright doesn't apply.

I don't see why crowd funding would be needed. The potential market is so small you could print 200 and still have some left over. It'd only cost a few hundred quid.

Is that correct about 1930? What about comics and characters that carried on after that date, as many did?

That 1930 date doesn't sound right to me. Wikipedia says it's 70 years after the death of the creators, but the fact they were created for an employer affects it, so that rule may not even apply to most comics, unless the publisher is defunct without a successor taking on the assets.

I, for one, would buy a collection of Roy Wilson strips - or a collection of comics of that period. Similar to yourself, Lew, I’m very interested in our British comics heritage.. so that’s 2 of us at least! :)

Love the cover and of course Roy Wilson...some nice time puns and imagination...also like the wild animals on the cover...

Love the happy animals dancing in the last panel...love these two creative strips..

It would also depend on contracts, James, if such contracts existed, and if the strips were created wholly by the freelancer or partly, or entirely, by editors on staff.

I would also think that any reprints of the strips since then would retain copyright. For example, those vintage strips reprinted in Cheeky weekly in the 1970s would stretch the ownership to that decade, not the decade where they first appeared. I dunno though. It's not as simple as it may appear.

Really enjoying see some of these old comics Lew, they have a certain magic to them. I seem to recall that there was a Roy Wilson comic collection a few years ago, I love his art as (I think I have said before) it reminds me a bit of Hunt Emerson's early underground work. The earliest comic I have is an old Radio Fun comic it just "sparkles" with fun.
l

Yes, the Roy Wilson hardback was published many years ago but is worth tracking down. A great retrospective of his career, with lots of sharply reproduced strips.

Another problem with copyright is that the name and appearance of some characters might actually be trademarked. I agree that it can all be quite confusing.
- Phil Rushton

Yes, plus copyright would have been renewed on those old strips that IPC reprinted in Cheeky weekly, some if which were from comics such as Jingles etc.