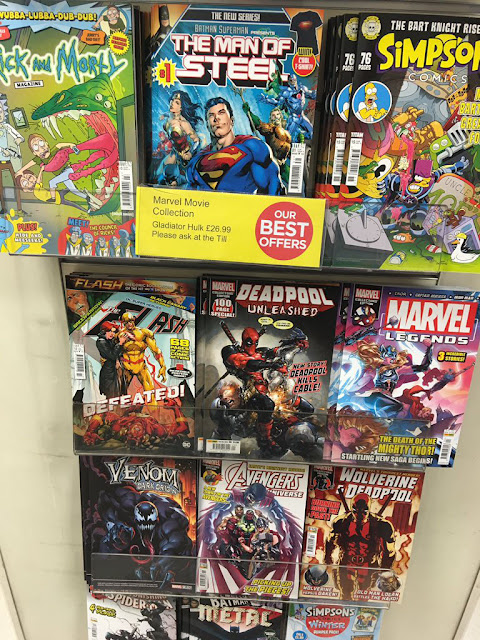 I've often criticised newsagents and supermarkets for not displaying comics properly so it's good to see one that's doing it really well. My thanks to Stephen Parry for this photo of the Panini and Titan comics at WH Smith at Birmingham New Street Station. All the comics are clearly displayed in a shelving display that attracts attention and interest. This is how to grab the attention of potential new readers, not by hiding them behind the counter like some branches of Smiths do! Well done to the New Street Station branch!
Posted by Lew Stringer at 13:52

Although I know of and buy the Titan and Panini CEs, if I wasn't, this would have grabbed me.

In some branches, they are hidden away behind the counter or hidden behind other comics. Not exactly gonna grab people, eh?

So it was nice to see these.

The Sutton Coldfield (West Midlands) branch of WHSmith has all the Panini CEs behind the counter, partially - and that's a generous use of the word partially - hidden behind merchandise and so much else.

They are the ONLY comics hidden behind the counter. I couldn't take a photo as I doubt that would have been allowed.

How on earth does that assist an impulse buy? Sutton Coldfield residents are not going to know about those CEs; the only people who will are those who ALREADY KNOW THEY EXIST. How are the CEs going to attract "new blood"?

I haven't spoken to anyone in that branch, but if they churn out the old chestnut about theft, I will not believe them. NO OTHER comics are behind the counter.

And here's some logic for them: I often find cover CDs ripped off the front covers of the likes of music magazines, IT magazines, etc. Are they going to put The Guitar Magazine or a Linux magazine behind the counter? I doubt it.

I have no idea what is happening, nor do I like doing conspiracy theories, but it feels like someone is incorrectly assuming that CEs are prone to theft. Well, I'd wager that far more chocolate and stationery is stolen. And if they need to put all 7 Marvel CEs behind the counter, then that's a poor reflection on security guards in the store.

Inform Panini about it, Stephen. The more people complain, perhaps they'll take action. Smiths are paid to display them in the shop, not hide them.